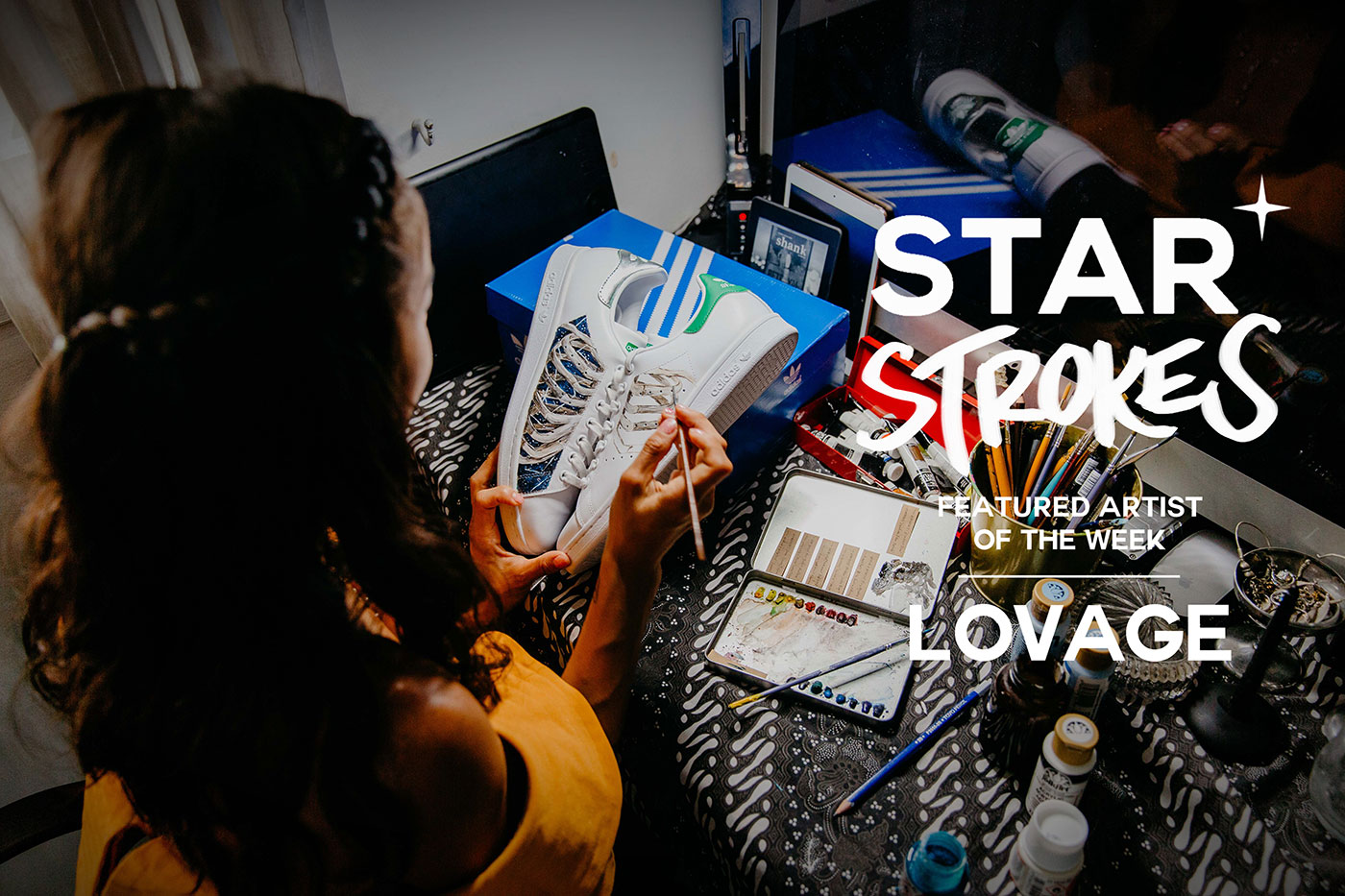 I love the idea of creating wearable art. Art that you can wear is art that can be seen all over the streets, all over the world.

Think Tiffany Tan and intricate body illustrations immediately come to mind. The illustrator and photographer, who goes by the moniker Lovage (@lovage), first earned her claim to fame for her detailed hand-drawn henna art.

As someone who is influenced by nature and the human body, inspiration is all around Tiffany. With so much to admire and emulate every day, she decided to pursue a career in art in 2011.

Curiously, Tiffany is specifically inspired by body organs and the inner workings of the human body. As a result, her creations are often a cross between the delicate and macabre, but are no less beautiful.

“The human anatomy is interesting because it’s what keeps us and our insides together. It’s what protects us and holds us up. It’s something that we can’t see, but it’s there,” explained the illustrator.

While Tiffany’s art may be small in scale and minute in detail, its impact has been huge. Her unique aesthetic has landed her several projects including collaborations with watch brand Arbutus and accessories label Coach. In October 2014, she was profiled in The New Paper for her henna designs she tattooed on her friend and former Marc Jacobs model Nadia Rahmat.

For STAR STROKES, Tiffany puts a classic Lovage spin on a pair of adidas Originals Stan Smith sneakers. The design is corpus meets constellation; a ribcage painted onto a blanket of stars on the uppers of the shoes. Try to spot the hidden smiley that Tiffany tends to incorporate into most of her work !

“I painted ribs onto these shoes because your ribs hug and protect your organs, just as shoes protect your feet. I also like the idea of wearable art because it gets to travel. Whoever gets these, when they travel, let’s say to Europe, my art will be there along with them,” said the artist.

Tiffany’s fascination with the human body and the way it functions could well be the reason why she is in great shape. Her athletic physique bears testament to her dedication to Muay Thai (Thai kickboxing), which she recently picked up. In fact, she took part in a kickboxing competition hosted by Vanda Boxing in March this year and won.

“I was always an active kid and I played softball in school. I also played frisbee while at LaSalle. Maybe one day I’ll figure out a way to mix art and sport together,” said the artist.

Keep up with Tiffany on Instagram (@lovage) or or visit tiffanylovage.com

To win the adidas Stan Smith customized by Tiffany Lovage (@lovage) in your size, follow these 2 easy steps: 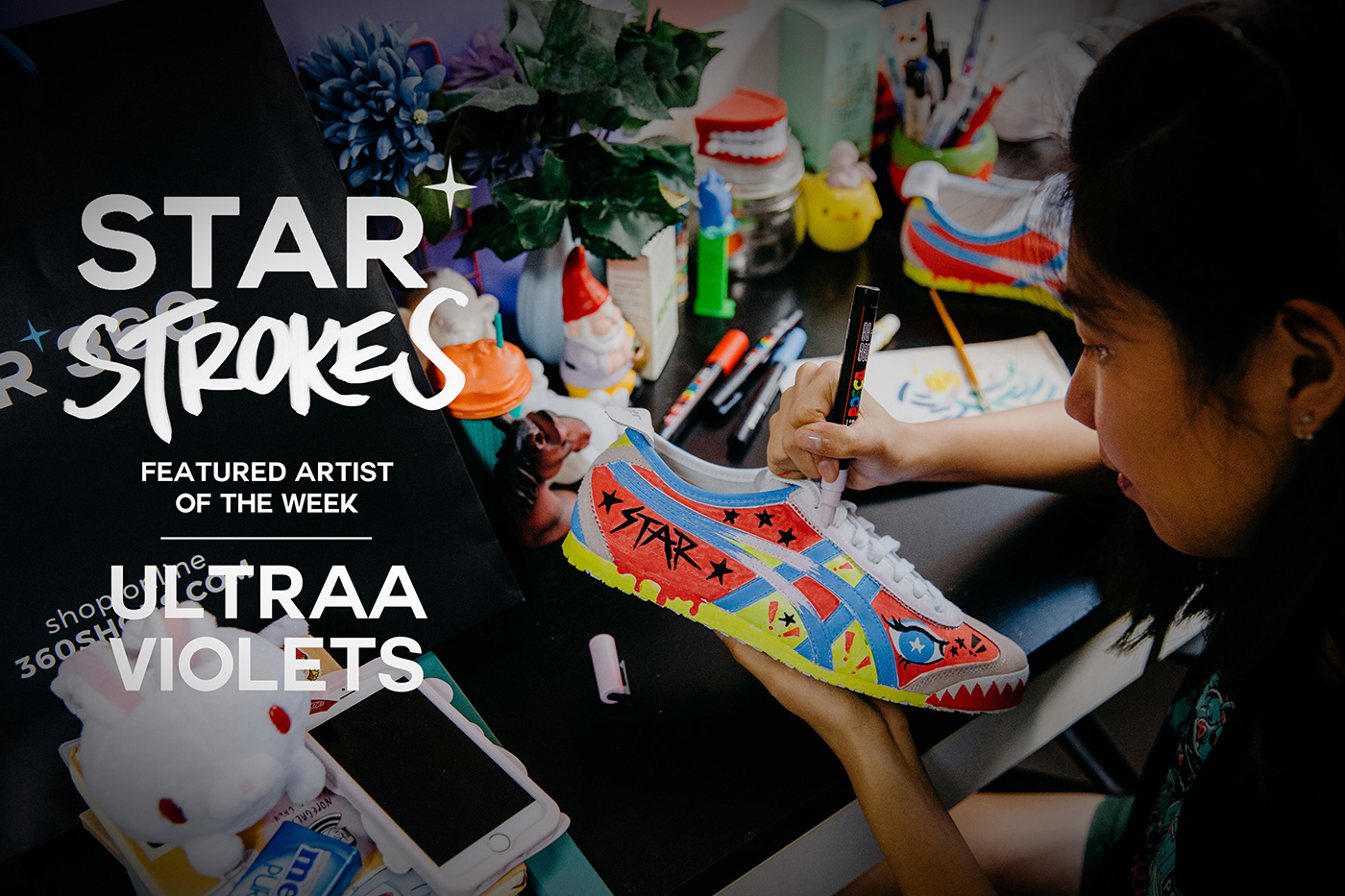 I took on this STAR 360 project because it gives me the opportunity to explore creating traditional, hand-drawn illustrations, which tend to be more challenging for me – and I love a challenge.

Kimberly Tan, also known as @ultraaviolets on Instagram, is an art director with a passion for digital illustration. Ever since she started her account on Instagram in 2013, @ultraaviolets has gained over 11,000 followers and has worked with numerous brands including Coach and Innisfree, all from the comforts of her bedroom studio.

Kimberly first took an interest in art while she was in secondary school. She realized that she never got sick of making art and the process of creation was a form of stress relief for her. She went on to take up a visual communications course at Temasek Polytechnic with a specialization in digital illustrations thereafter. The first campaign Kimberly scored was a collaboration with All Script Magazine for which she recreated several of her favorite magazine covers from titles like Frankie and Kinfolk.

Today, the artist splits her time between her full-time job and creating merchandise under her label UltraaViolets, which she launched in 2014. Her eye-catching collectibles – patches, pins, and stickers – are a result of her preference for high color contrast and the influence of Wes Anderson films and ’90s sitcoms.

For this STAR STROKES by STAR 360 project, Kimberly gives a pair of Onitsuka Tiger Mexico 66 her colorful and eclectic touch. It has eyes painted on both sides of the shoe, jagged edges around the front and stars and exclamation points all over the upper.

“This is the first time that I’m working on a sneaker customization. It’s a lot harder than I thought because once you illustrate something on it, you can’t take it back, unlike digital illustrations,” explained the 25-year-old.

Don’t be fooled by the shoe’s whimsical appearance, the design is inspired by a weighty issue – the artist’s observation of a worrying number of people who can’t look up from their smartphones even when crossing the road.

“People looking at their phones while crossing the road is something that personally bothers me. They’ve even put in traffic light strips on the ground around the Buyong Road area to cater to people who cross the roads without looking up from their phones,” said Kimberly.

And that’s what’s unique about Kimberly’s work. The inspiration usually comes from a real life scenario or issue, but it’s expressed in UltraaViolets style, with a bold employment of color, whimsy, and the absurd.

To win the Onitsuka Tiger Mexico 66 customized by Kimberly Tan (@ultraaviolets) in your size, follow these 2 easy steps:

I have a soft spot for sneakers and currently own over a hundred pairs of shoes. A project that involves sneakers and art? Count me in.

Mas Shafreen, also known as @wantondoodle on Instagram, is a professional illustrator and the founder of Band of Doodlers (@bandofdoodlers). The art collective, established in 2013, has made it its mission to rid the world of blank walls. Mas and his Band of Doodlers have painted for lifestyle brands as well as for commercial and charity events.

Mas developed an interest in art at the tender age of two after deciding that his mother’s lipsticks would look good on the walls. As he grew older, having artists as friends encouraged him to delve deeper into his love for art. He cites Singaporean artists Jeffrey Koh (Flabslab) and Mark Ong (SBTG) as two particularly inspiring people. Comic artists Jim Lee, Chris Bachalo and Geof Darrow have also inspired Mas.

Mas first started painting on sneakers and skate decks. Over time, he moved on to painting bigger canvases including murals and walls. The largest surface he and the Band of Doodlers ever painted – a mural for Siglap Secondary School – measures four storeys high.

“I moved from sneakers to murals because I wanted to see my artwork as something larger than life. Obviously, the bigger it is, the more impressive. And murals tend to have public access, unlike sneakers and skate decks. But with that said, I have to say, that in terms of ease, sneakers are still one of the tougher canvases to work on,” said the artist.

For the STAR STROKES project, a campaign by STAR 360 that brings sneakers and art together, Mas has illustrated a whimsical constellation onto a PUMA Basket Classic. The design etched in white marker across the striking black colorway feature playful elements, not unlike the adorable characters often featured in Mas’ illustrations.

“I chose to create a playful constellation because the constellation, like the shoes, gets you to where you want to be,” said the illustrator. “I like to create artwork that will put a smile on people’s faces,” he continued.

Mas is a real sneakerhead who owns more than a hundred pairs sneakers. He says that the count is currently a little lower seeing as to how he recently gave away 20 to 30 pairs of his Nike Air Max shoes to some of his nieces and nephews.

Giving back to the community is integral to Mas and the Band of Doodlers. All 200 artists in the collective meet up once a week to collaborate on art projects or bounce ideas off each other. Band of Doodlers also conduct workshops, visual recording exercises and mentorship programs with a number of institutions including United World College of South East Asia (January 2018) and Noise Singapore (2017).

“Our collective is very diverse. The median age of the group is mid-twenties, because I’m so far off the age scale, I bring the mean age up a little bit. But basically, it’s a young group, and our youngest member is only 6,” explained Mas.

Keep up with Mas on Instagram (@wantondoodle) or visit wantondoodle.com for more information.

To win the PUMA Basket Classic customized by Mas (@wantondoodle) in your size, follow these 2 easy steps: