Top Mixed Martial Arts (MMA) fighter and former welterweight champion Ben Askren has been undefeated in his 12-fight career. We caught up with him before his debut at ONE FC: Honor & Glory. Ben Askren has never lost throughout his 12-fight career, and was even a welterweight champion with a previous fight organization

1. He has a nickname – “Funky Ben”.
“Funky Ben comes from a wrestling style that’s loosely called ‘funk’. I was one of the best people at it so that’s how I got that nickname.”

2. Prior to MMA, Ben was a successful collegiate wrestler.
“I made the switch to MMA because I saw a lot of my colleagues, teammates and other people that wrestled do really well in MMA. I liked watching it and thought I could be pretty successful so I gave it a shot.” 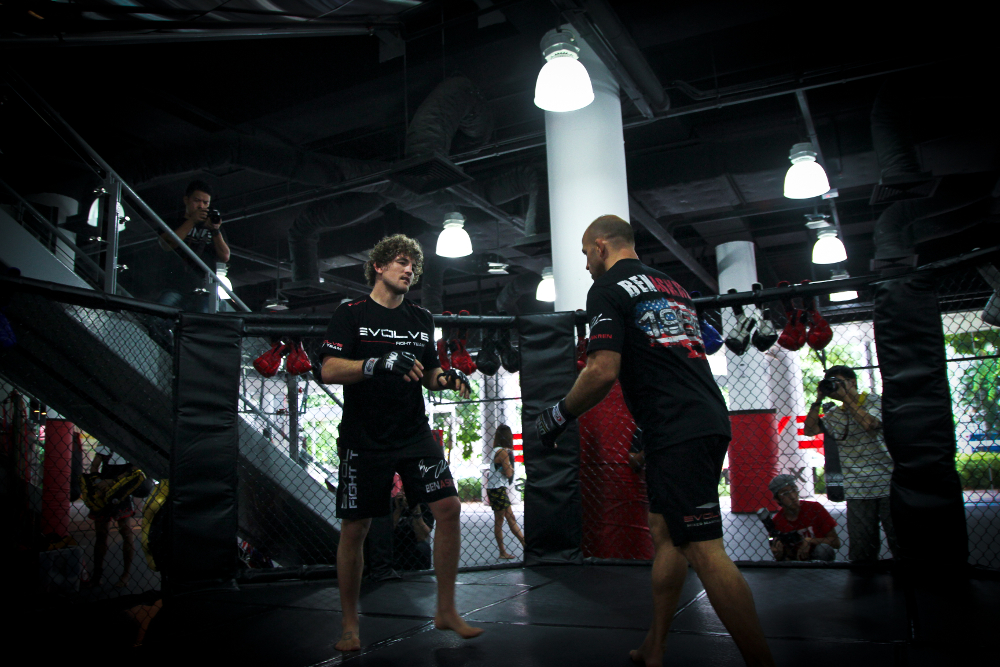 3. Don’t underestimate Ben’s wrestling ability, it’s helped him remain undefeated in all of his 12 MMA fights.
“With wrestling, you can control the fight. You get to choose whether to strike with them or take them down and beat them up on the ground. If you’re not a wrestler, you don’t get to choose. You only get to do whatever the wrestler wants to do. Wrestling is a really tough sport in America but a lot of us do it since we’re little kids so we’re just built up into it.”

4. He has ambitious plans for his six-fight deal at ONE FC.
“I hope to stand undefeated and win all my fights dominantly. Just like I’ve been doing all along, winning every single round. Every time I get into the cage I get the chance to prove how good I am. I’m excited to move forward and keep on beating people up pretty bad.” Ben putting a rear naked choke, one of the many submission moves in his arsenal, on Evolve MMA coach Heath Sims

5. Make no mistake, Ben doesn’t let up on his fight preparation.
“My training regimen is exactly the same throughout my whole career. I train about nine times a week, sometimes two times a day. I’m in great shape and I’m ready to fight.”

6. He’s comfortable training and fighting in Singapore.
Singapore’s very modern and westernized. It’s not like we’re in the middle of nowhere with no good food or anything. Singapore is awesome and the challenge of a different timezone is precisely why I came over earlier to train and get used to everything. He may be all smiles outside the cage, but Ben takes each and every fight seriously

7. It doesn’t matter who he faces in the cage.
“I’m a fighter, so I step into the cage and fight whoever is in the cage. I’m not the matchmaker, I’m not the promoter, so I try not to concern myself with those things that I can’t even control. That’s someone else’s job. Whatever I get, I fight.”

8. Yet, Ben harbors no hard feelings for his opponents.
“MMA is a sport. It’s not like I don’t like the opponent or want to hurt the guy. It’s a sport and I’m there to win, and to do that you’ve got to hurt the guy. Unfortunately it’s a tough way to win but that’s what you have to do.” The fight card for ONE FC: Honor & Glory features an impressive lineup

9. He’s not worried about his upcoming fight with Bakhtiyar Abbasov.
“I did some research on him, just a little bit, like watching a few videos. I know Abbasov’s a wild, strong guy. He’s not a technical striker so I think it’ll be fine for me.”

10. He takes it easy outside the cage.
“I’ve a dog and I really love taking it out for walks. I’ve also got a daughter who’s 15 months old and I play with her a lot. Besides all that, I do a lot of outdoor stuff.”

Tickets to ONE FC: Honor & Glory, happening 30 May 2014 at the Singapore Indoor Stadium, are still available, click here to purchase them.