In yet another indication that is going to be the year of the Superstar, adidas brought back its original Consortium partners to work their magic for the adidas Consortium Superstar 10th Anniversary Pack. 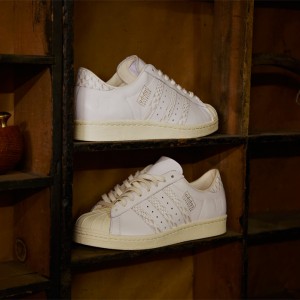 Ten years ago, adidas celebrated the 35th anniversary of the Superstar, one of the brand’s most iconic silhouettes, with The Consortium Series that was made in collaboration with some of the world’s most respected footwear retailers. A decade later, adidas has invited several of the original Consortium partners to add their personal touch to the adidas Consortium Superstar 10th Anniversary Pack.

First up is the Undefeated x adidas Consortium Superstar, which sees the sneaker clad in an all-white leather upper with reptilian detailing. This is complemented by the off-white leather lining which matches the toe box and sole unit. The vintage adidas Superstar logo is printed in gold behind the iconic three stripes, and Undefeated’s own five stripes logo is embossed comfortably on the lateral heels of the shoes. Lace them up with any of the three sets of laces provided, with one set featuring Undefeated branding throughout.

Following this is the Dassler x adidas Consortium Superstar, a homage to adidas’ founder, Adi Dassler. The monochromatic sneaker sees a picture of Dassler debossed onto the heel, with a black leather upper contrasted by white on the heel tab, three stripes and toe box. Laces come in black or white with Consortium aglets, and 10th Anniversary branding is found on the inside tongue label and suede footbed.