The Apple iPhone SE is a lower-priced option for those who prefer their smartphones to be sleek and compact. 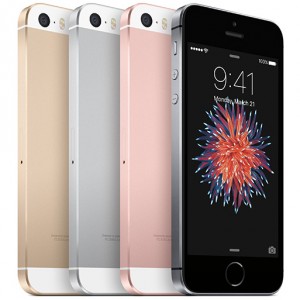 While it may seem that the Apple iPhone SE is a reinvention of the wheel, it’s really another option for consumers who want a high level of performance, but in a smaller form factor.

The Apple iPhone SE bucks the trend of “bigger is better” by utilizing a four-inch retina display, housed within a compact aluminum design. Unlike its predecessors like the iPhone 5 and 5S, the iPhone SE uses the same 64-bit A9 processor chip found on the flagship iPhone 6S and 6S Plus. This means similar performance that can handle today’s demanding apps.

It also comes with the 12-megapixel iSight camera, though it lacks the Optical Image Stabilization found on the 6S Plus. Taking Live Photos and recording in 4K resolution is also possible on the iPhone SE, which is a relief for photo and video enthusiasts.

Other marked improvements include more LTE bands for greater connectivity, and a longer battery life due to the inclusion of the M9 motion coprocessor.

Nonetheless, Apple has had to do away with some features when it decided to shrink the iPhone. The FaceTime Camera has been downgraded from 5-megapixels to a mere 1.2, though this is not an issue if you hardly do video calls.

More importantly, the 3D Touch that has made the iOS interface a breeze to use, is lacking here. Perhaps Apple determined that the smaller screen size would make it easy to touch any part of the screen and render 3D Touch redundant, but users who are accustomed to its convenience would beg to differ.

The Apple iPhone SE is available in four colors — Silver, Space Gray, Gold and Rose Gold — and in 16 and 64GB capacities. It will retail at S$658 and S$828 respectively, at Apple’s online store, authorized resellers and select carriers. Customers from Singapore can order theirs from Thursday, March 24th.