ARCHIVE by Bape Singapore runs from now till Saturday, April 23. 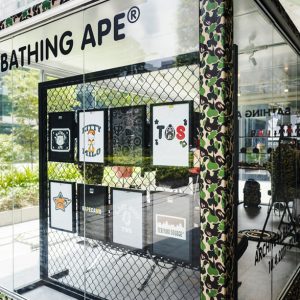 A highlight of the exhibition is a series of 26 limited edition BAPE t-shirts (circa 2005 to 2014) contributed by BAPE fans in Singapore. The tees were curated via a contest held on Instagram in March this year.

BAPE-heads might recognize some of the t-shirts on display. Limited edition ones to look out for are the World Wide BAPE Heads Show (2008), BAPE Teriyaki Source (2009), and more recent releases such as the BAPE x Mastermind Japan collection (2011).

Tees aside, other BAPE merch on display include the notable BAPE x Adidas Superstar sneakers (2003) as well as a number of BE@RBRICK x BAPE collaborations. “Through our collaboration with BAPE, we see the synergy of blending sharp, clean styles with bold and funky designs come to life, creating an SUV which is not just fit for the road, but fit for the astute,” said Mr. Wolfgang Huppenbauer, President, and CEO of Mercedes-Benz Singapore.

ARCHIVE by BAPE® Singapore is conceptualized and created by Straatosphere for BAPE Store Singapore in conjunction with the store’s 7th anniversary.