Art Stage Singapore is back for its fifth edition from 22 to 25 January 2015 at the Marina Bay Sands, Sands Expo and Convention Centre. The event stays true to its distinctive concept as the go-to spot to discover, experience, understand and be exposed to art and ideas from around the world. Here are 10 highlights from the show. 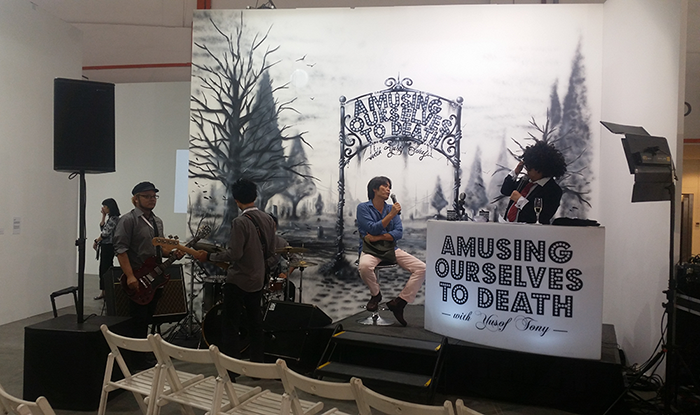 More than just a mere platform for art enthusiasts and collectors, the Art Stage Singapore places strong emphasis on innovative content, quality work and art education. It has the ability to drive the focus off tangent and transport its audience to an alternate timeline free from pressure and intimidation. Time comes to a halt, and as always, everything is up for languid interpretation and self construal.

It was no different this year as we found ourselves lost in the hallways of the Art Stage Singapore. Here are 10 highlights worth looking out for.

Sam Jinks’ hyperrealistic works are a startling perversion on the senses. Twisted and astonishing, the self-taught sculptor constructs his works from silicone, fiberglass, resin and real human hair. From freckles to frown lines, close attention is paid to his sculptures, down to the last anatomical and emotional detail.

A Chinese artist living in Paris, Hong Wai’s art features traditional chinese ink on white paper. Her paintings are a fusion of traditional Chinese paintings with the raunchy modernity of the West. Seemingly one-dimensioned at first glance, Hong’s enchanting ink paintings upon closer inspection appear to be constructed from a series of ink-on-ink repetitiveness with multiple layers before achieving the final translucent finish.

What’s most startling about Enzo Fiore’s depiction of New York City is the use of dirt and insects to construct his artwork. The overall visual effect is impressive, and achievable only with the use of filth and muck to outline the edges and illuminate the shadows and cynosures of the painting. Perfect imperfection.

In The World of the Blind – Liu Yi-Lan

Eight girls dressed in red with heavy eyebags. It gives you chills, to say the least. But the intent behind the painting proves riveting. Based on the Sunflower Student movement, artist Liu Yi-Lan intended on exemplifying the importance on the protest movement against the passing of the Cross-Strait Service Trade Agreement by the ruling party Kuomintang. With one eye closed and the other open, the girl in the centre represents the two sides to a story, and that things are not always what they seem.

She’s 21 and has self-proclaimed to suffer from ADHD, having first started creating art as a result of her hyperactive personality and fidgety hands. Though ‘disconcerting’ and ‘scary’ have been some of the adjectives to describe Mars’ works, they are surprisingly entrancing.

His sculptures are thought-provoking, an attempt to elicit a reflection on the state of Singapore’s economy and the value system of our society. The 63 stoneware ceramic ‘da pao’ boxes explore the true cost of a relentless pursuit of prosperity and progress, as well as its impact on our environment and livelihood.

Lipi’s works stand in stark contrast to the colorful explosions on canvas and sculptures at Art Stage. With thousands of razor blades of stainless steel reshaped to that of a solo dressing table, the light gleams off it’s shiny surface menacingly. Lipi’s work revolves around political issues such as feminism and gender stereotypes in society. Her bizzare yet beautiful sculpture begs the question: What is beauty?

Black’s Angels with Dirty Faces (beginning) is a candy skull featuring over 15,000 plastic flowers in an array of pastel colors on aluminium. It’s the first in a series of three, and sets the tone for ‘death art’.

Tracing a faint memory back to childhood Halloween trick-or-treat rounds, these jewelry sweets were wildly popular in the 90’s. Paying homage to the timeless period, this creation conveys the notion that there is an inner child in all of us.

To the Philippines-born Concepcion, OMG Christ depicts the juxtaposition of the nostalgic, religious references of his childhood and the pop-art culture he has been exposed to since his adolescent years. The tongue-in-cheek piece captures the tension between religion and art, tradition and modernity, in a lighthearted manner.