We speak to the beatmakers behind the .Wav(y) conceptual nights prior to their headlining act at our highly anticipated party SELF-MADE at Refuge this Saturday night! 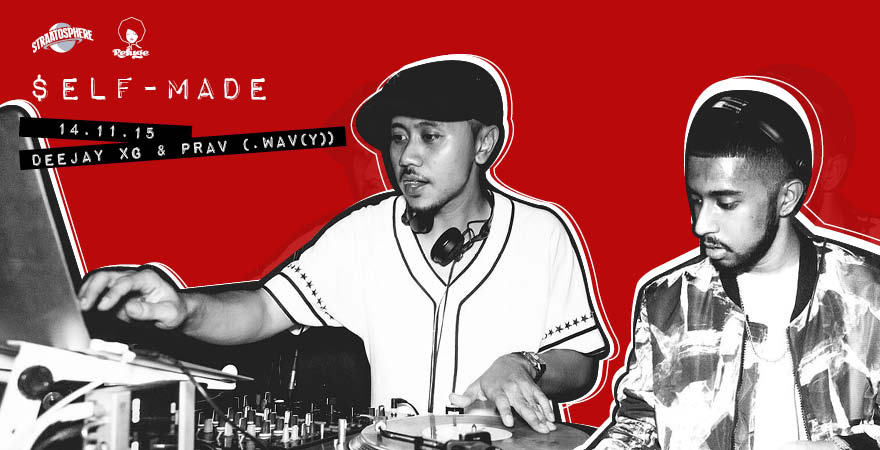 Let’s go way back to the start. How did each of you get into music and at what point did you decide to go into DJ-ing?
PRAV: Well, I’ve always been intrigued by the process behind the music and eventually enrolled into Lasalle College Of The Arts to learn the production and engineering aspects of it. DJ-ing was self taught and it was just a natural transition where I could express myself and vibe out with people who have the same musical palette.

Deejay XG: I mainly took a liking to the culture of hip hop even though I listen to other music genres as well. Got into DJ-ing not because I love hip hop or DJ-ing but because I love music.

How did .Wav(y) come about?
PRAV: We crossed paths living in the same neighborhood and always found ourselves talking about hip hop and streetwear brands, so that kinda bonded us. A friend of ours was organizing a gig and it fell through so the venue was up for grabs and we decided to throw a party and invited some friends down. Eventually, it started growing and we realized how much people gravitated towards the music we were playing so we got pretty serious about doing a conceptual night that’s based around hip hop music and streetwear, that’s how .Wav(y) came to fruition. Fun fact: The name .Wav(y) is based on the highest quality uncompressed audio format, that being .Wav and the term “Wavy” is just an overall positive connotation, put two and two together and you get “.Wav(y)”.

From the name of your collective, it’s clear that .Wav(y) aims to champion a more modern sound.
PRAV: It wasn’t a conscious decision to aim for a more modern sound. It was just the music and vibe I was feeling at that particular moment in time and that pretty much organically translated into our night.

Deejay XG: Just look at the difference in our ages and the eras that we’ve both lived in. I’m from the 90s era of hip hop/alternative/electronic/hardcore-punk music towards the present while PRAV is from the now towards the future.

How would you describe each of your styles and how do each of your styles complement each other?
PRAV: We’ve got a pretty good balance of the two ends of the spectrum. XG plays more of the laid-back hip hop tunes, a mix of the mid school and lots of NY vibes while I play the new school stuff, plenty of southern hip hop and Toronto vibes. In that regard, it’s always a steady buildup of energy in the room. Not giving away too much, you’ve gotta come through to a .Wav(y) show to experience it.

Deejay XG: Our style is rojak – meaning everything in a pot that could set your mood right.

Singapore’s electronic music scene is constantly evolving. There are some pretty good labels coming out of our city and guys like Myrne who are being signed to international labels. What are your thoughts on these developments and how do you think the electronic music scene here can flourish further?
PRAV: I was honestly inspired after reading that article on Myrne. It just goes to show that it doesn’t matter where you’re based, There are no limits if you’ve got the drive to work on your craft. There’s always the mentality that being in a country that’s so small, we’re cornered when it comes to branding our music abroad, this just goes to prove otherwise. In this day and age, you never know who’s checking out your music/art/videos on the web and that’s the beauty of the Internet. It all comes down to putting your work out in the universe and manifesting your dreams. In regards to developing the electronic music scene over here, I would say just coming together as one as a community.

Deejay XG: Electronic music hasn’t flourished here much as of yet. As of now, it could only be a novelty; when there’s no hype and demand, there’ll be no supply. Big ups to those who got signed to those music labels. As a head start, I would strongly suggest setting up an internship program to pair local electronic music producers up with international established electronic music labels.

Who are some of the DJs from Singapore or elsewhere that inspire you guys at this point?
PRAV: Been really inspired by the Livin’ Proof DJs from London. Also, the Soulection collective, namely Sango, Mr. Carmack & Joe Kay and obviously DJ Craze all the time!

Deejay XG: I would say the mundaneness of some of those so-called “hip hop” nights out there have given me inspiration at this point…

You guys always dress for success. What are some labels you fux with these days?
PRAV: My entire wardrobe is just decked out in basics. Longline t-shirts, bomber jackets, flannels, parkas, denim and just rotating it all the time to stay fresh. To put it in two words it would be minimalistic and monochrome. Really diggin’ Stampd LA, love their aesthetics. Also, H&M, you get quality garments at such a steal. Locally, I’ve gotta say BASED – shoutout to the homie Izzraimy.

Deejay XG: Being the first “Lo Head” (Polo Ralph Lauren booster) ever in Singapore and I f**ks with Supreme NYC as well .

And lastly, because we have to throw a sneaker question in for good measure: What shoes will you be wearing to SELF MADE?
PRAV: It’s gotta be the adidas Tubulars. It’s mad comfy and it’s so versatile, seamlessly blending the sports and luxe look. adidas has been killin’ it with their collabs and releases lately. Gotta admire them for constantly raising the bar when it comes to sneaker technology. The Tubular & ZX Flux silhouettes have definitely brought the brand back to the forefront. Also, not to mention the impact Kanye has had on the brand with the release of the Yeezy Boost 350s and 750s. Well, I could honestly go on talking about sneakers if I don’t stop here.

For a sampling of what to expect this Saturday, check out these mixes by Deejay XG and PRAV:

Catch Deejay XG and PRAV at SELF-MADE, a party brought to you by Straatosphere and Refuge. RSVP here for free entry before midnight. See you there!