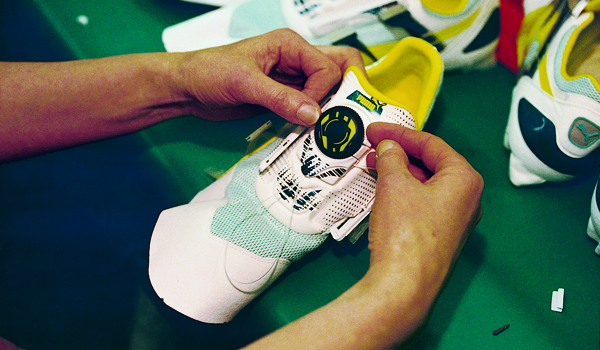 Take a look at the upcoming Puma SS15 Disc collection and follow us on Instagram for updates of its Turn It On Disc Party happening tonight at Zouk in Kuala Lumpur, Malaysia.

The Puma Disc Blaze is easily recognizable by sneakerheads and has become the canvas for many collaborations, most notably between atmos and Ronnie Fieg.

But what exactly does the Disc technology entail? It’s a signature closure system that Puma introduced in 1992. Considered ahead of its time, the Disc system consists of a plastic disc on the tongue that tightens internal wires as it is rotated, providing a custom fit for the wearer and comfort through its formfitting technology. Thanks to its futuristic aesthetics, Puma’s Disc system is more than a practical replacement for traditional shoelaces and has cemented itself in modern sneaker culture.

The continued presence of the Disc system since its debut over 20 years ago makes it more than worthy of a celebration, and Puma is doing just that with the exclusive Turn It On Puma Disc Party happening tonight at Zouk in Kuala Lumpur, Malaysia. The event will showcase the new Puma Disc collection as well as its history and heritage. Follow us on Instagram (@straat0sphere) as we bring visual updates on the party’s happenings.