Every first Friday of the month, T-FUNK is the reason why Tokyo’s groovers, hotsteppers and crate diggers gather in a Shibuya club to drench themselves in synthy funk and dubby disco. The night, run by talkbox artist Matzuda Hiromu and DJ/producer Foniks, aka Chad Fischer, can be seen as an extension of the global jazz fusion movement, where rare Japanese citypop harmoniously blends into Dam Funk. 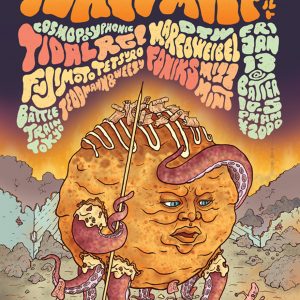 An original Foniks poster for a recent DTW gig in Tokyo 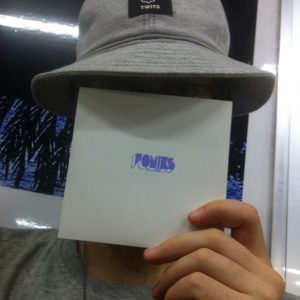 Foniks’ musical journey, guided by various strains of funk, has spanned Los Angeles, Saigon, and Japan’s capital. In addition to T-FUNK, the California native also gigs around Tokyo and produces his own blend of sunshine-soaked frequencies.

Foniks, a Darker Than Wax (DTW) affiliate, has released some singles via the Singaporean label. He also has two self-released albums to his name.

But his craftsmanship goes beyond just the decks. As an illustrator, he’s sketched a DTW logo, album covers for various artists (WONK, Down 2 Earth, DJ Pound), as well as designs for Tokyo clothing store Conte Nu.

According to Foniks, finding the funk is never hard in Tokyo, “You can usually find good music any night you want to head out.” Sometimes, it’s as easy as walking into a 7-11. “You can sometimes hear super legit, breezy jazz covers of songs you’ve never realized could/would be flipped that well and played in a convenience store.”

Foniks’ other favorite things about Japanese nightlife include “drinking in public between events so you don’t spend all your yennies on over-priced drinks”, and never having to worry about safety on long walks home.

In a country teeming with talent, asking for a Tokyoite’s favorite local artists should be a crime. Luckily, Foniks was game.

N’gaho Ta’quia, or Sauce81, is a leading underground producer with releases on heavyweight imprints Catune and Eglo Records that have been played out by the likes of Lefto and Gilles Peterson. N’gaho is also one-half of 77 Karat Gold with Jazzy Sport’s Grooveman Spot.

Boogie Mann, a juke producer, is one of the staple figures in Japanese footwork. He boasts three albums under his belt, including one on famed Yokohama label Ghost. His track  “Rotation” was recently featured in the THUMP documentary “Footworkin’ in Tokyo.”

Tomonobu Kanno (aka Budamunk), a well-known producer in Japanese hip-hop, has a unique brand of old-skool and mellow beats that has won global acclaim. He’s known for scoping out Japan’s sickest MCs, many of whom are featured on his albums.

Another respected beat-maker both at home and abroad, Daisuke’s dance-floor friendly productions have been making waves since his debut album in 2010. An RBMA graduate, he also has a side project with Kidkanevil called Kidsuke.

One of the most famous voices to emerge from Japanese pop of the 80s, Tatsuro, now 64 years old, remains a living legend. As one of the country’s most successful male solo recording artists, his dreamy, jazz-tinged melodies are a hit with the old and young.