Speed, swords or superheroes. Take your pick and enjoy our movie choices for this month! It’s been eight years since Gerard Butler and his crew of well-chiseled men sizzled our screens, but the Spartans have shaken the dust off their swords and are finally back. Thanks to his character’s death, Butler won’t be making an appearance, but his kick-ass moments on the original film are forever immortalized. Thankfully, Lena Headey and Rodrigo Santoro are reprising their roles as Queen Gorgo and Xerxes respectively, lending credibility to this sequel.

The story carries on from where it left off previously, with Xerxes still alive and advancing his Persian army toward Greek city-states. First on the list is the city of Athens, whose fleet is led by admiral Themistokles (Sullivan Stapleton). The admiral has to unite all of Greece in order to repel Xerxes’ massive force that also includes the dreaded Persian navy, led by Artemisia (Eva Green). Known primarily for its popular racing video game series, Need For Speed has made the transition to the silver screen to give the Fast and Furious franchise a run for its money. Motor heads will be thrilled by the amount of horsepower present in this movie, as we spied super cars from Bugatti, Lamborghini, McLaren and the revered Ford Mustang GT that’s driven by the protagonist in this film.

Just like other racing action movies, expect a straightforward plot that won’t captivate you as much as the scenes of fast cars burning rubber on tarmac. Street racer Tobey Marshall (Aaron Paul) is released from prison, having served time after being framed by former NASCAR driver Dino Brewster (Dominic Cooper). Taking to the streets, Tobey pits himself in a high stake race against Dino to exact his revenge, dodging the police and the bounty put out for him.

It’s not often that we get treated to a film with an ensemble cast, but with so many big names attached to this one (just look at the movie poster), we can’t possibly leave it out of our list. It’ll be interesting to see how director Wes Anderson manages each actor’s screen time given movie’s short overall runtime of 99 minutes.

The movie centers around Gustave H (Ralph Fiennes), a concierge at an European hotel, whose lobby boy Zero Moustafa (Tony Revolori) becomes his trusted friend. Trouble ensues a priceless Renaissance painting is stolen amid a battle for an enormous family fortune. Sounds like an action-packed drama? Nah, judging from the trailer this film leans toward being lighthearted and comedic. 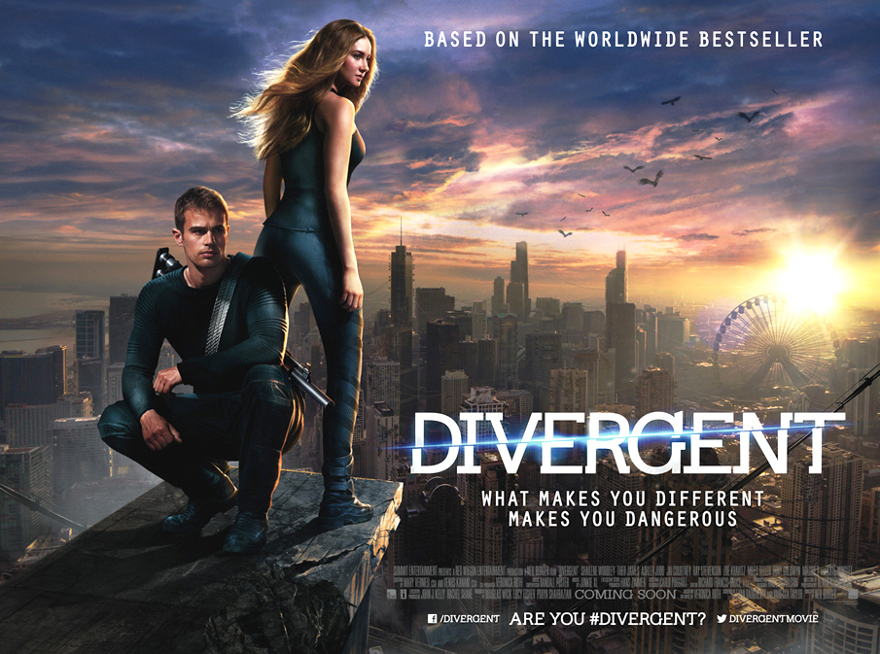 There’s been a recent shift to females taking up leading roles and setting box office records. Just ask Jennifer Lawrence, whose work in The Hunger Games and its sequel brought her fame and fortune. While the premise for Divergent share some similarities, it remains to be seen if it’ll receive critical success or not.

Based on the best-selling book by Veronica Roth, Divergent is set in the future where people are divided into various factions depending on their personalities. Tris (Shailene Woodley) is deemed a Divergent as she does not fit into any one group. Soon, she finds out that there’s a plot to kill off all Divergents including herself, for reasons not made known. Tris will have to race against time to find out why Divergents are so dangerous and to stop those who want her dead. Marvel have been hard at work in recent years, building up their Cinematic Universe to entice both comic fan boys and new audiences. While we’ve been treated to familiar favorites such as Iron Man, Thor, Hulk and Captain America, the company is taking a gamble with Guardians of the Galaxy, due later this year. But that’s a story for another time.

While most of Captain America: The First Avenger was mostly set in the World War era, this sequel continues after the events of The Avengers. Attempting to embrace the modern world he now lives in, Steve Rogers/Captain America (Chris Evans) encounters a foe in the form of the Winter Solder (Sebastian Stan), formerly Rogers’ comrade Bucky Barnes who fell into a snow mountain in the previous film. Like all previous Marvel movies, stay till the after-credits for teaser scenes that will whet your appetite for the upcoming Avengers sequel.