Fu Lin has been serving yong tau foo for the past 20 years; its latest venture into fusion cuisine sees tapas and drinks introduced to the revamped Fu Lin Bar & Kitchen over at Telok Ayer Street. Longtime customers need not worry since Fu Lin continues to serve yong tau foo at lunch. It’s only when night falls that it shows its other side, transforming into a watering hole that’s fast becoming a favorite with professionals who work around the area.

Kitchen duties have been entrusted to Head Chef Warren Poh, whose stints in Barcelona and Beijing have informed his creation of the East-meets-West menu at Fu Lin – the reason why you can have yong tau foo alongside a perfectly grilled Iberico Steak. 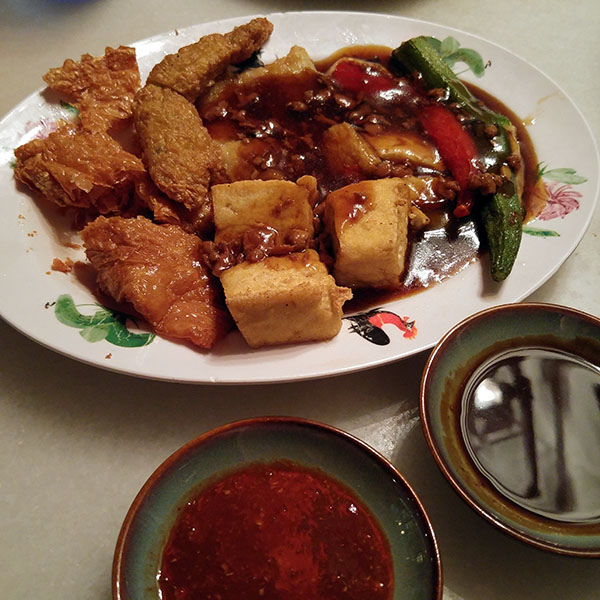 Dinner at Fu Lin is all about convivial, community dining. Food comes in sharing plates – the best way to sample a variety of dishes. The yong tau foo is also one of the sharing plates on the dinner menu, but while diners get to pick their own pieces at lunch, there is no such option at sundown. What you get: Seven assorted pieces served with Fu Lin’s signature yong tau foo bean gravy. Not that anyone is complaining. Dali’s Pork Feet is perhaps the most intriguing dish found on the tapas menu, and it certainly doesn’t disappoint. What it is: A slab of fatty meat slow-cooked and fried till golden brown, with a teriyaki glaze that completes this sinful, melt-in-your-mouth dish. Fu Lin takes pride in its ownership of an Inka oven, a much raved about piece of cooking equipment that produces mouthwatering char grills with authentic flavor. But that’s all talk until you’ve actually tried Fu Lin’s grilled meats. The verdict? We had the Iberico Steak and U.S. Grain-Fed Beef, and both were cooked to perfection, thankfully. It must be said that we’re partial to the Iberico Steak; juicy and slightly pink on the inside, this smokey and flavorful dish was easily the best we sampled at Fu Lin. Another memorable dish is the Crab Risotto. Made with spanner crab, salted egg cream, tobiko and leek, this dish is an explosion of umami. The sweetness of the crab flesh coupled with the savoriness of the salted egg and tobiko imparts the risotto with such complex flavors. 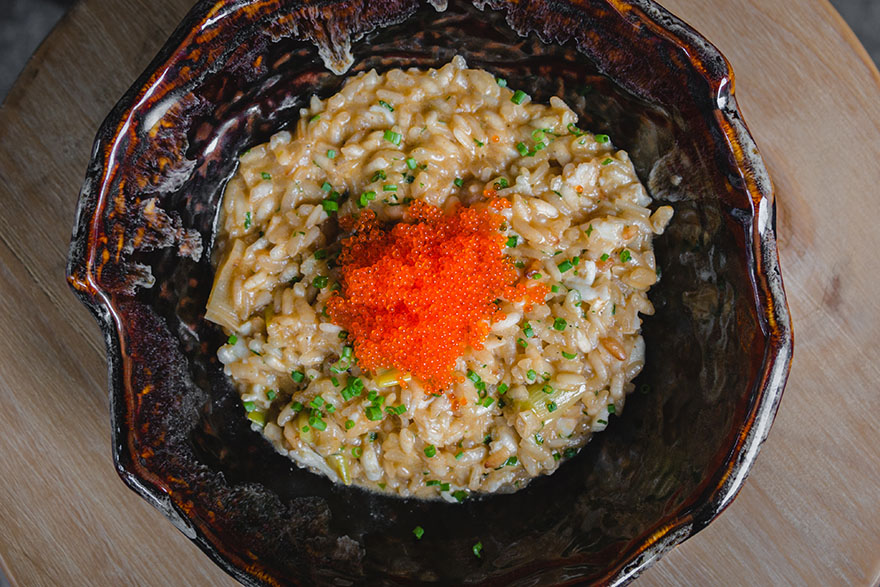 Like many other food joints in the area, Fu Lin Bar & Kitchen has an expansive list of booze that will leave you spoiled for choice. If your dinner buddies are agreeable, toast collectively to one of the many sake varieties available, but if it’s every man for himself, get the Young Tau Foo, a special in-house concoction of pressed beancurd and Snow Leopard vodka. Fu Lin Bar & Kitchen is located at 127 Telok Ayer Street, Singapore 068596. Opening hours are 10am – 3pm and 5pm – 12am (Mondays to Saturdays). Closed on Sundays. Visit its Facebook page for more information.