Lim Kok Kean, aka DJ Bunga of KL-based music collective Twilight Actiongirl, is as much a denim junkie as he is a music geek. We talk the blues with him and pick his brains on denim buying, collecting and labels worth looking out for. 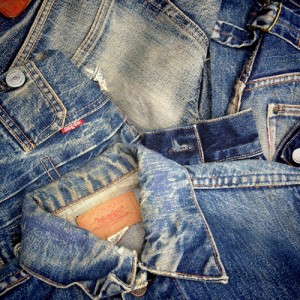 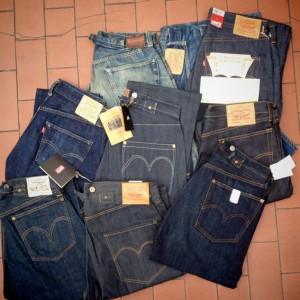 How many pairs of denim do you own?
I would say maybe about 40 to 50 pairs, some of which I’ve outgrown, but I still keep them.

How long have you been collecting denim?
For about 20 years. It all started when I visited flea markets as a 16-year-old kid. These flea markets in Malaysia were the dirtiest and grungiest. It’s where people go for bundle sales – items are bundled and priced according to the quality and grade. These markets catered originally to foreign workers but soon enough, the cool kids found their way there. Firstly, it’s cheap, secondly, you’d find plenty of one-of-a-kind stuff. These days hipsters and fashionistas digging for clothing have become a fixture at these markets. When did you begin to feel more than what might be called an “average affection” for denim?
I think it was during my college years in 1994/1995. That’s when I first developed an interest in clothing, in particular denim and streetwear. This was solidified after my first trip to Japan in 1996. Their level of attention to detail – obsessive to a certain extent – really appealed to me. I also hung around a lot of old timers and regulars at the flea markets I mentioned before, from whom I gained knowledge and learned to love denim more. I mean, this was the ’90s and info was hard to come by; you couldn’t just Google anything and everything.

What was the very first pair of denim you bought?
I really can’t remember but I remember the first pair of really expensive denim I bought was a pair of reproduction Levi’s. There was a Levi’s shop in this mall that very few people knew about, and it was the first in Malaysia that carried the LVC (Levi’s Vintage Clothing) line. As the pair was of one the pioneer batches of the LVC line, most of the details were messed up. It cost between RM400 and 500 (between USD120 to 150), which was insane at that time. Later, I sold it to someone else for three times more. 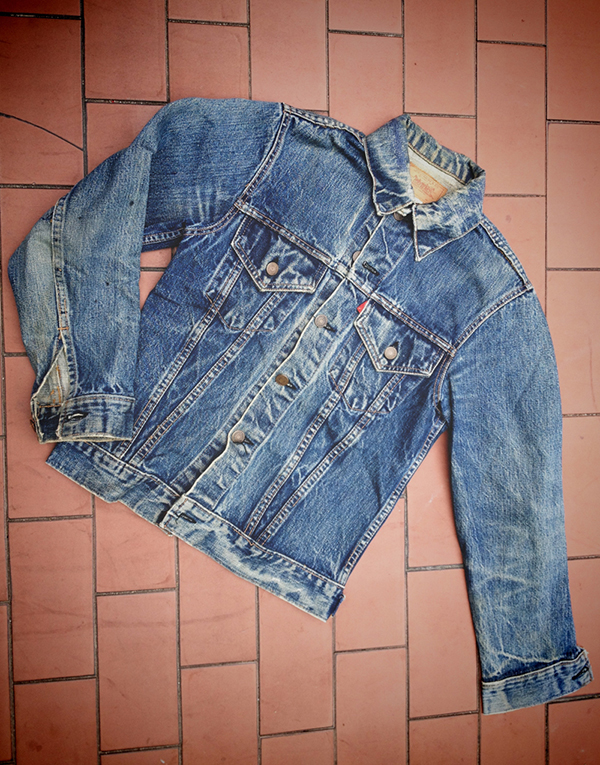 Another lucky find: Lim scored this vintage ’70s Levi’s Type 3 557XX jacket for 50 bucks because the guy who sold it to him didn’t know how much it was worth

Do you collect vintage denim anymore?
Not anymore. I don’t make the effort to dig for vintage denim. All my vintage denim have been lucky finds – I’ve not paid more than a four-figure sum for vintage denim because I’m not that crazy about it. I once scored a vintage 70s Levi’s jacket for 50 bucks only ‘cos the guy who ran the store didn’t know the value of the item. Currently, I’ve got a couple of vintage pairs now but nothing major that people would go crazy over – a lot of Japanese repro brands, Studio D’Artisan, and Evis, or Evisu before it became Evisu.

Which is the most expensive pair in your current collection?
My most expensive pair would have to be a pair of vintage Evis or Levi’s which costs about RM1,200 to 1,300. Even those were lucky finds. Evis is highly sought after by denim collectors because they are considered the best denim repros. 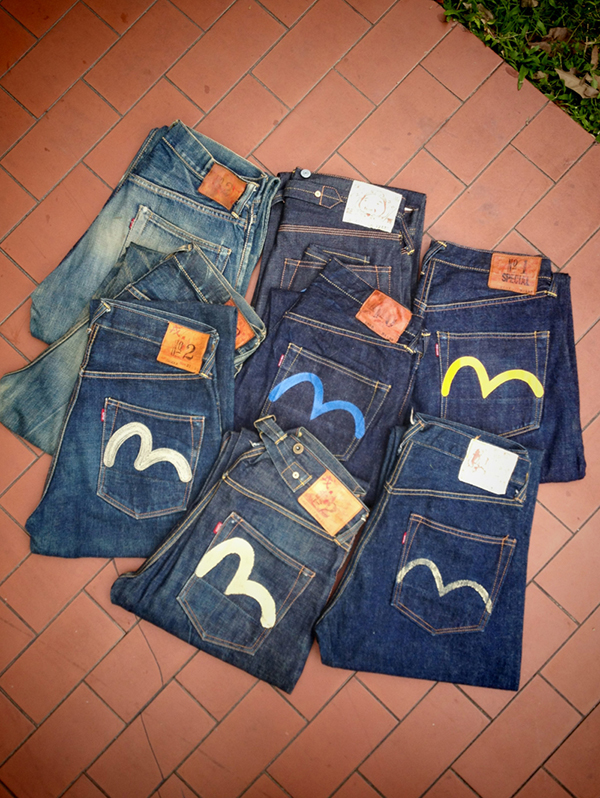 Part of Lim’s collection is a mix of Evis and Evisu denim. Evis is highly sought after by denim collectors because they are considered the best denim repros

What do you look out for when buying denim?
Imperfection, which to me is a characteristic of vintage denim. That’s what really appeals to me and the Japanese labels, I think, have mastered the technique of vintage denim production. Back when Levi’s made the first jeans they were made of old loom machines which were not as efficient resulting in inconsistent fabric, which soaks up the indigo dye in a unique way. Modern machines produce near-perfect fabric, so all denim looks the same now. Which is why I like to collect old denim; they tend to have beautiful fades.

Do you wash your denim?
I wash them when they stink up. I had a pair that I didn’t wash for two years. Everybody has their own rules and theories about how to wash denim, but to each his own. What I do is turn my jeans inside out and soak it in hot water with shampoo, which is milder than detergent. Some people are obsessive, I’m not. To me, it’s about how much wear you put into your denim. 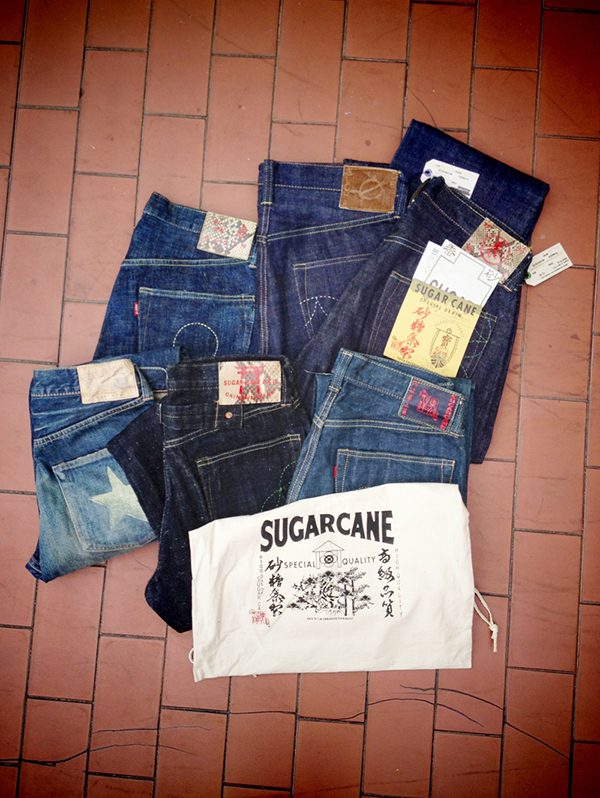 No collection is worth its salt without some Japanese denim. As its name suggests, Sugar Cane jeans are made of denim derived from sugar cane

So there are no hard and fast rules to caring for denim?
Back in those days when the miners were wearing Levi’s, you think they had time for that? Back in those days, the miners didn’t think about it being fashionable, they wore jeans to trash them. History tells us the miners didn’t go through the trouble of caring for their denim to get amazing fades. All they did to get amazing fades was to put in a lot of wear. I would never be able to get fades like that because I work in an office, but if I did a lot of heavy labour, a lot of bending and stretching, then maybe.

What is your go-to pair of denim?
Denime, a Japanese repro brand. I think they’re the best because the character is beautiful when you put in a lot of wear. I have four to five pairs of those. 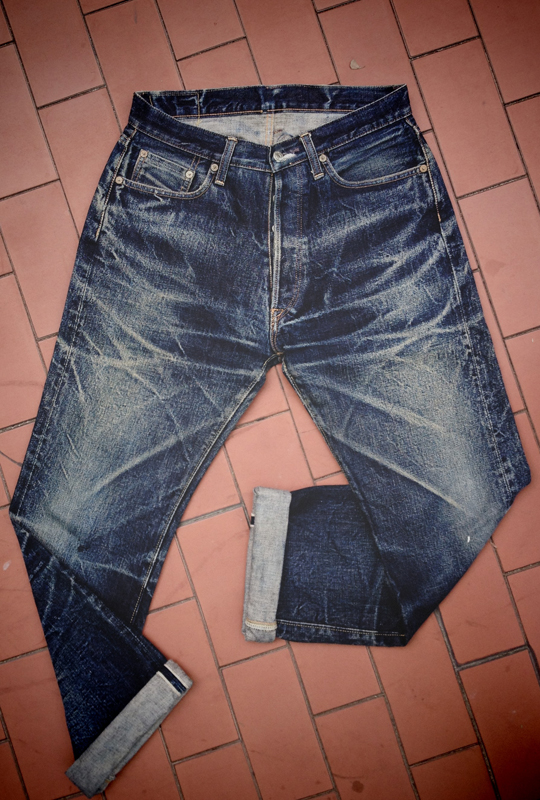 American or Japanese denim?
In modern times, Japanese denim. Some people will say denim comes from America so America has the best denim but even the Americans must admit that the Japanese have done amazing things with denim. They’ve bought the machinery, they’ve studied it and they’ve managed to reproduce it well. But just like any other thing, it’s all a matter of preference. Some people like their denims to fade quickly, some people don’t.

Are there any up and coming brands that have caught your attention?
There’s an English brand called Tender, which started out as a one-man show. The denim they sell is not cheap but there’s a personal touch to the way their run their business. The owner posts a lot on the superfuture forum too. Tender uses a unique English woad dye which results in denim with a purplish tinge. 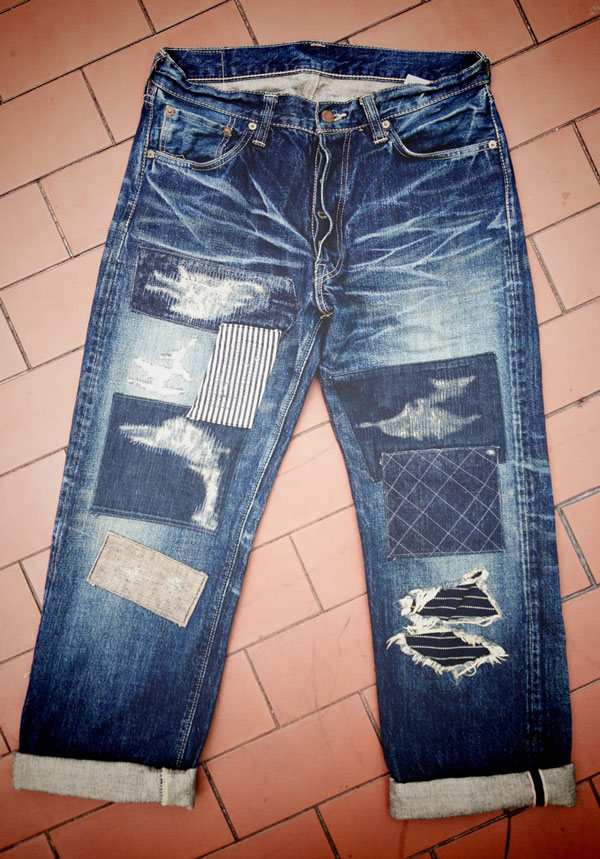 What’s a denim trend you can’t stand?
People who wear jeans that don’t flatter them. Some people wear their jeans so tight, it’s like how do you breathe in them? Wear denim that flatters. It all depends on your body shape. Guys with big calves in skinny jeans, that’s disgusting to me. I don’t like jeggings either – it’s cheating, it’s not even denim.

What are your thoughts on relatively newer denim brands that use words such as heritage, “Made in USA” or “Made in Japan” to appear more established?
You can claim your jeans to be made wherever and that’s ok as long as they’re really made there. But the use of the word “heritage”, “artisan” has been the most f***ing abused word for the past five years. What heritage have you got to speak of when you’ve only been around for the past five years? You may be inspired by heritage lines but you’re not heritage.

What do people think of your collection?
Not many people know I have a collection. Only the people I collect denim with know. I’ve got tons of CDs and sneakers at home too. I guess people will know now.