Introducing Straat Talk, our new series in which we invite you, our fellow sneakerheads and streetwear fans, to weigh in on hot topics via polls on social media. This week, we asked where you draw the line between rip-offs and inspired-by designs. Here’s what you had to say. Fueled by the ongoing Nike vs. Warren Lotas Dunk lawsuits, streetwear sites and comment sections have been lit with discussions about rip-offs and inspired-by designs of late.

But the practice of making bootlegs has been rife in the streetwear scene since before Lotas was served papers by Nike.

So, just where do we draw the line between rip-offs and inspired-by designs? We asked the question, and we’re grateful for your responses. With that, we present you the first ever edition of Straat Talk.

The creation that got us Straat Talking. In recent weeks, you couldn’t have gone a day without reading about the legal battle between California-based designer, Warren Lotas, and athletic giant, Nike.

Since the initial suit, Lotas went on to announce he will release a “replacement Dunk”, but even that has been struck down by Nike. The brand claimed that it still looked too similar to the SB Dunk. As of November 6, Lotas said he will challenge Nike’s trade dress protections on the basis that it is unenforceable. Only time will tell what will come out of Lotas’ pushback.

Meanwhile, here’s what you thought of the Lotas Dunk: 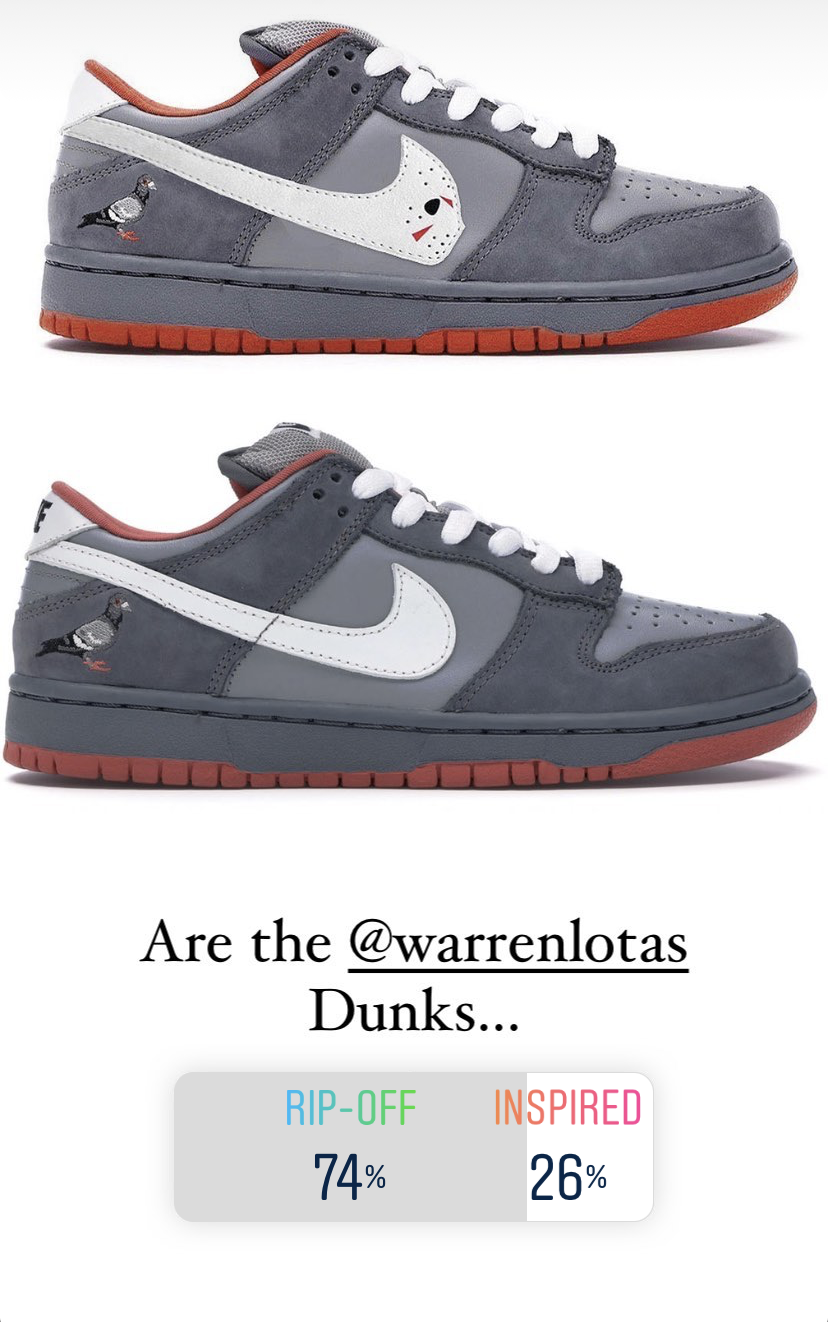 Even Virgil Abloh has not escaped the accusation of having replicated designs from smaller, independent streetwear brands. Some of the more damning ones came to light when Michelle Elie, a fashion designer, claimed that Abloh had copied her son’s runway designs. The designs in question are a yellow coat from Colrs’ FW2018 collection and a similar yellow coat featured in Off-White’s FW2019 range.

In response, Virgil told the New Yorker, “(the allegation was founded on) basically the use of a yellow fabric with a pattern on it… I could go on for a whole hour about the human condition and the magnet that is negativity. That’s why the world is actually like it is. That’s why good doesn’t prevail, because there’s more negative energy. You can create more connective tissue around the idea that this is plagiarised. It’s better just to sit and point your finger. That’s what social media can be. All that space to comment breeds a tendency to fester, versus actually making something.”

But it doesn’t end there. Abloh has been accused of stealing many other designs, including jackets from Walter Van Beirendonck FW2020 collection and Kerby Jean-Raymond, the designer of Pyer Moss.

Here’s what you thought of the Off-White’s FW2019 graffiti coat: 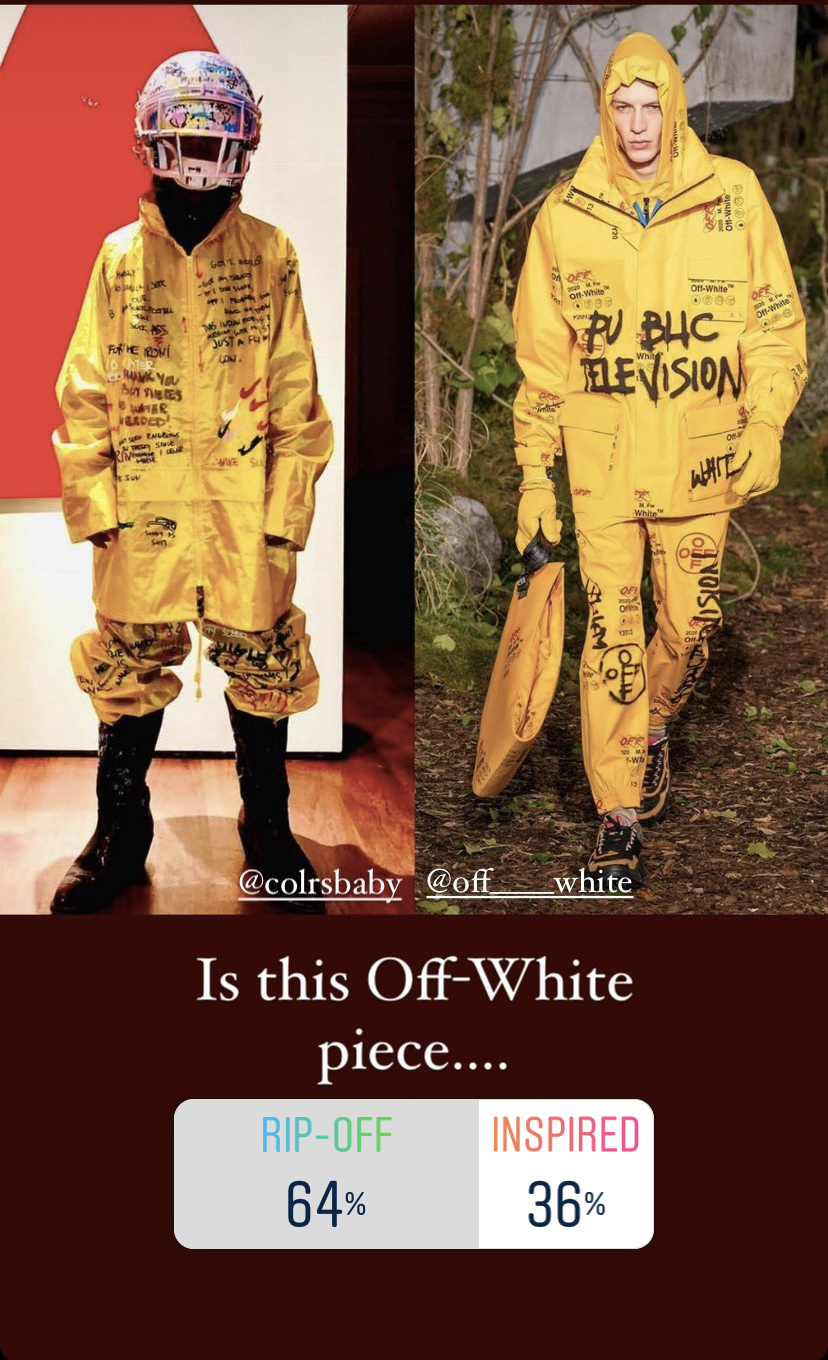 Bape and self-proclaimed “anti-advertisement group”, Brandalism, came together to release an ABC camo-clad miniature statue that looks a lot like the character in Banksy’s “Flower Thrower” graffiti, which he first painted in Jerusalem in 2005.

Prior to the Bape toy release, Banksy was already losing the trademark of the use of his “Flower Thrower” character to a UK-based greeting card firm, Full Colour Black.

Here’s what you thought of the Bape x Brandalism Flower Bomber: You may not have heard of Imran Potato, but you must’ve seen his bootlegged monogram matching jacket and pants set worn by Billie Eilish and Bad Bunny. Not only has the brand not been vilified, it hasn’t had a suit filed against it by the likes of Louis Vuitton or Gucci, both of which have had their monograms “borrowed” for Imran Potato’s designs.

In April last year, Vogue even tipped their hat towards the designer when they named Imran Moosvi, the man behind the brand, the “Instagram-famous bootlegger” in a non-derogatory profile piece. In the article, he was quoted saying he had no plans of abandoning the Gucci and LV monogram, going as far as to say he plans to manufacture dolls wearing monogrammed onesies and making toilet paper with the Gucci print.

Here’s what you thought of Imran Potato’s Blue Canvas outfit: 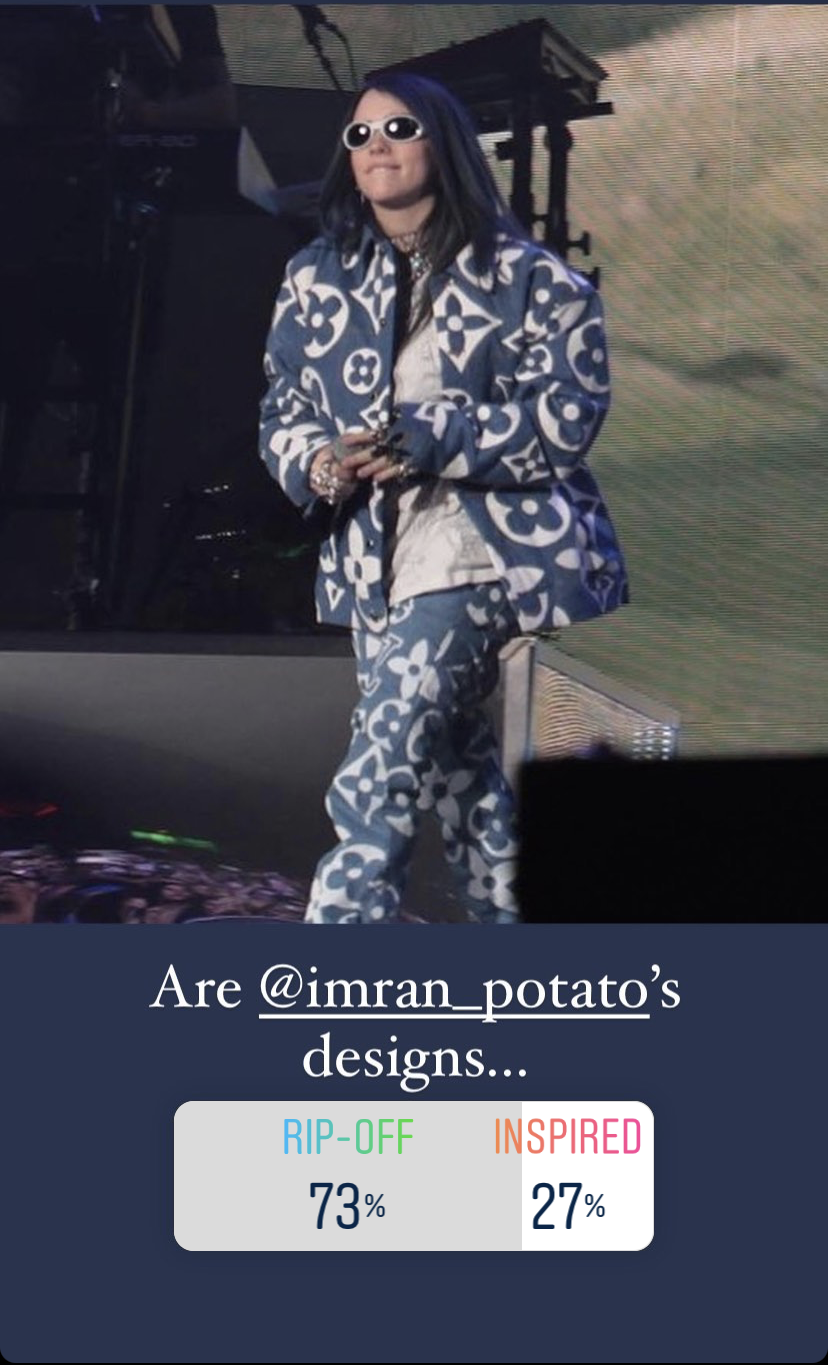 After three easy taps, we posed an open-ended question to round things off: What differentiates rip-offs from inspired designs? Here are some of your parting words to us:

Inspired designs look deeper into what makes something attractive. Rip-offs smacks it in your face. – @caelanhcy

Only a few elements are incorporated into the designs, instead of it all being similar. – @taeroplane

Rip-offs blatantly piggyback on the notoriety of brands/styles to motivate their own gains. Inspired designs take concepts from the original and repurpose it in a different way. – @thewashvintage

Inspired designs actually build on the idea and make it more unique. – @comme_here_garcon

If it aims to add to, pay homage, or reference then it’s inspired. Otherwise, rip-off. – @mktcitymobbin

Stay tuned for more Straat Talk discussions on @straat0sphere where we ask for your opinions on the hottest topics. If there’s a topic you’d like discussed, please email us at editorial@straatosphere.com.