Even though the hype surrounding the Nike SB has died down a little, Agus Tan remains a fan of the silhouette. We take a look at the tattoo artist’s sneaker collection.

How long have you been in the sneaker game?
I’ve been in this for quite a while now. I would say at least six to seven years?

What’s the size of your sneaker collection right now, and how much of it consists of Nike SB sneakers?
I own a little over 60 pairs currently. My highest count was more than 80 but I decided to cut it down due to space constraints. About half consists of sneakers from Nike SB. Agus used to own more than 80 pairs of sneakers, but now only owns about 60 pairs due to a space constraint

What drew you specifically to Nike SB?
I grew up hugely immersed in the Nike SB culture. When I was a teenager, everyone around me – friends, schoolmates and celebrities like Jay Chou and Edison Chen – was wearing Dunks and Nike SB. I was young and I couldn’t afford the price tags that came along with those kicks. I would say that I’m chasing my childhood back, one pair at a time. Back then, I even had a pair of bootleg Nike SB Dunks bought from Beach Road, because everyone else bought their “heat” there.

We understand that this is the third pair of Tiffany Dunk Lows in your collection. What happened to the first two pairs?
I got my first pair when I was 18. I took forever to save up for them and I copped them off a now-defunct shop called Warped at Far East Plaza. I wore them to ride BMX and had no idea about value nor hype and whatnot back then. I just loved them and wanted to wear them everyday. I ran down the first pair and bought my second pair about four years later, but they were a tad too tight so I sold them off and copped the current pair I have now! Sounds like you’re the kind of guy with no qualms getting your shoes all beat up. Is there any pair that you can’t bear to wear?
It would have to be the SBTG x Nike SB  Dunk Low which was released in 2006. I kept them deadstock for about a year and finally decided to rock them not too long ago. However, after years of storage the material at the toebox is pretty fragile, and mine cracked after the first wear. I’ve only worn them twice since and I’m still looking for a deadstock pair in a “friends and family” edition, so that I can wear the hell out of my current pair. Point me to a pair if any of you guys see one!

The hype surrounding the Nike SB has died down recently. What are your thoughts on this?
I guess it’s really due to the hype surrounding the newer releases these days. Kayne’s signing with adidas, the NMD and Boost lines that are perpetually coming out each week, and the OG Jordans which were retro-ed again these few years. People just stopped focusing on classics and leaned towards modern fashion, because everyone wants to be seen in the latest trends in town. The SBTG x Nike SB Dunk Low is a pair that Agus can’t bear to wear often; he has only worn them three times

What are you most proud of when you look at your collection?
When I look at my collection, I am proud that I managed to hunt down some pairs that were pretty hard to track down, for the right price and condition. In the end, it’s really how much you’re willing to pay for a certain pair and how much you really want them. Over the years, the sneaker resale market has taught me to be patient.

Do you have any strange sneaker habits?
I am pretty particular about my sneakers having at least the original box and I’ve always preferred sneakers with white midsoles for contrast. And I like them to be clean and dust-free so I keep each pair in a ziplock bag inside their boxes.

What other Nike SB release are you gunning for right now?
I’m hunting for a pair of Dunkles, which was a collaboration between Nike SB and graffiti artist Futura back in 2005. I am also looking for the Supreme x Nike SB Dunk Low Black Cement, which was released back in 2002 when the Nike SB line was first introduced. The resale price on them has tripled over the years. 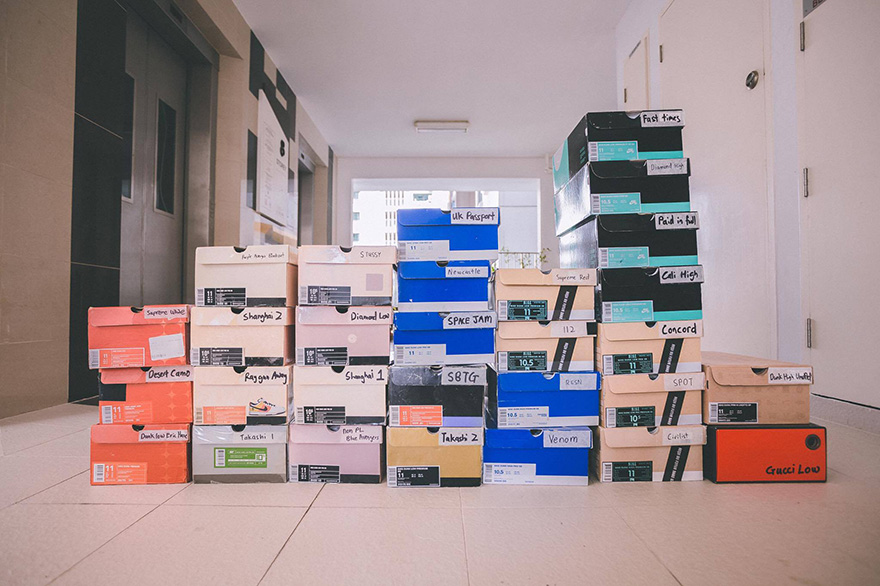 Some people say you’ve got to be a skateboarder to appreciate Nike SB. As a non-skater, how do you feel about that statement?
To each his own. I don’t think everyone who wears Jordans knows how to play basketball. Or everyone who wears Flyknits loves to run. To me, as long as you love what you wear, you don’t have to be worried about what people would say.

Besides Nike SB, what other brands are you into?
I am also a big fan of New Balance and their runner silhouettes like the 997 and 998. A lot of their “Made in USA” releases have top-notch quality and materials. I also love the classic adidas Superstar silhouette. And lastly, Vans. Their skate shoes are super durable for BMX riding! I had many pairs that held up for years. If he had to get rid of his collection and keep only one pair, Agus would keep the Eric Haze x Nike Dunk Low

If, for some reason, you had to get rid of your entire collection and keep only one pair of sneakers, which would it be?
It would be the Eric Haze x Nike Dunk Low. Eric Haze is a Graffiti Artist in NYC and I’ve always appreciated different artists and their style of work. It was released back in 2002 but it is not an SB per se. I saw a schoolmate wear them back in 2005 and I knew I had to own them sooner or later. I really like how Eric’s style was fused into the sneaker. It feels like I am walking on a graffiti art-piece.

With a background in tattooing, have you tried creating custom sneakers of your own?
I have a pair of BAPE-inspired Vans Old Skool sneakers which was designed off a plain white pair. It has camouflage print all around the shoe on the canvas. I saw something similar on the internet and thought I could try it out too. It was my first time trying to paint a shoe and I had a lot of help from my girlfriend back then. It will always be a special pair to me. 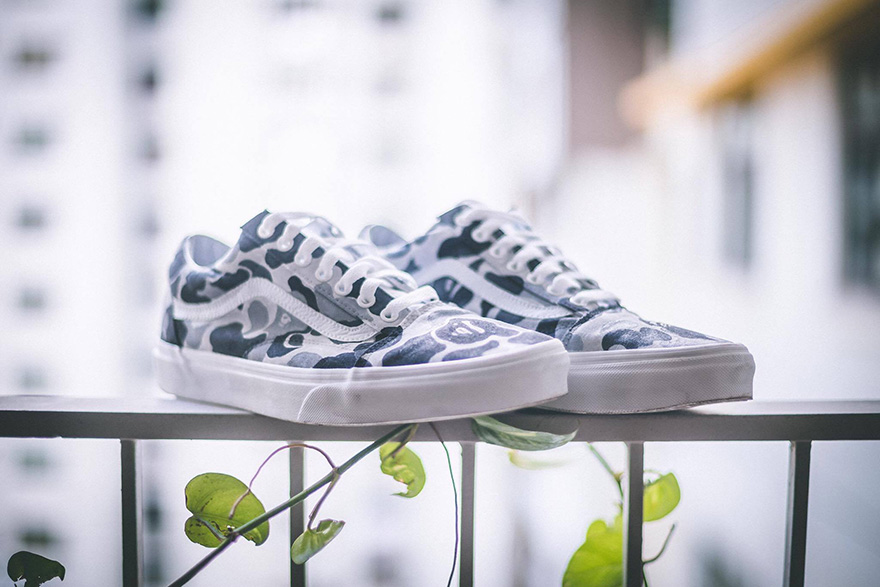 What do family and friends say when they see your collection?
My mother nags at me all the time about the sneakers in my room; I think she’d have a heart attack if I told her the amount of money I spent on some of my sneakers. My extended family is amazed at the amount of sneakers I own although I told them that there are plenty of people who have many more than I do.