Twisted Joe, the man behind local label Hypethetic who’s also a sneaker customizer, has a keen eye for valuable sneakers. Quality over quantity is the name of his game. Here’s a look at his collection and why he believes people should rock, not stock. How many pairs of shoes do you own?
More than 100 pairs but I’ve lost count. I believe in quality over quantity and some of these sneakers can be expensive, which means I may sell 10 pairs to buy a good quality pair. When did you begin to feel more than what might be called an “average affection” for sneakers?
My love for sneakers dates back to when I was just 10 years old and playing basketball. During my teenage years, I used to wear OG Jordans to play ball – they’re all thrashed and thrown away! By the time I was 16 or 17, I owned ten pairs of shoes, which I could afford because I worked part-time. 1995, or the year of the Japan sneaker boom, was the turning point for me as a true sneakerhead. The first few shoes I started collecting were the Nike Air Footscape 95 in the blue-grey colorway, Nike Air Jordan 11, and Nike Shake Ndestrukt.

What was the very first pair of sneakers you bought?
The Nike Sky Force 88 Mid in white and grey. Got them from Spitfire at Peninsula Plaza. Joe’s sneaker game is driven by the motto: Quality over quantity

Which were the shoes that got you into sneaker collecting?
The Nike Footscape 1995 – the first ever Nike Footscape released in blue and grey color. I still have them at home! 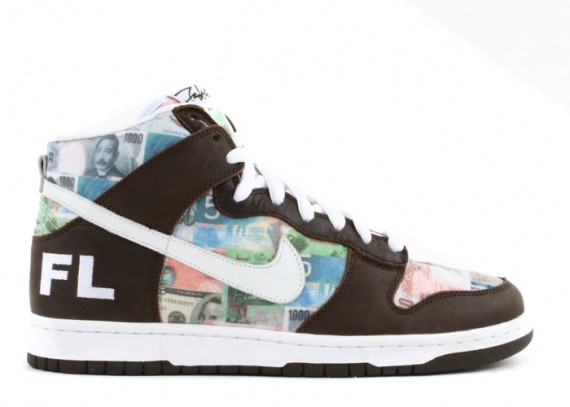 You seem to value quality. How does this influence your label, Hypethetic?
I do value quality. It’s the reason why Visvim can charge a premium for its apparel. I once took a Visvim shirt to a textile shop in Singapore and the uncle told me that it is made of a high-grade fabric that cannot be found in Singapore. Such quality fabrics are usually exported to Europe and Japan only. A reputable local printer contact even told me that the tags on the shirt alone would cost about $10. Aside from Visvim, I’m also influenced by old school street brands that have been there, done that and survived the test of time like Stussy. With Hypethetic, I try and find a middle ground between super premium and classic old school.

These “Hyperstrike Woven” were specially hand-woven using 3M material and made for U.S based sneaker magazine, “Sole Collector” for the opening of Sole Bar

What are your thoughts on Singapore’s sneaker buying and/or collecting scene?
The sneaker culture hasn’t changed much in terms of the reselling and the hype, which has existed from way before. True collectors don’t like resellers as they “spoil the market”. But I’m aware it’s all part and parcel of the game; you can’t do much about it unless you don’t buy from resellers, which is very unlikely through the course of your sneaker buying and/or collecting. Whether you like it or not, resellers do contribute to the sneaker scene by providing for sneakerheads who have missed out on original releases.

Nike Dunk Hi “Sole Warlord III” custom by Hypethetic; inspired by the Five Tiger Generals of the Kingdom of Shu during the period of the Three Kingdoms in China

Any tips for fellow sneakerheads?
Pay for quality. Instead of shelling USD$1-2k on a pair of Lebron or Air Yeezy, which exists in the thousands or tens of thousands in the world, why not spend the same amount or slightly more on a pair of “Pigeon” SBs, as they are limited to only 150 pairs in the world? My point is, if you’re willing to drop that kind of money, spend it on a more durable variety of sneakers such as the “Pigeon” SB, which comes with mid sole stitching, instead of the less durable “air-unit” variety of sneakers such as Lebron or Air Yeezy, which fetches the same price only because of the hype. No offense to basketball shoes collectors…

Where do you usually go to acquire your sneakers?
Limited Edt and eBay. 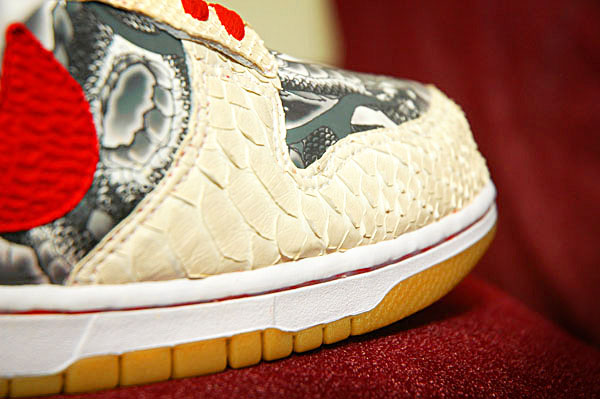 Turning regular sneakers into grails. Check out the amazing details on these 1 of 1 Nike Dunk Low “Yakuza” customs by Hypethetic!

How do you care for and store your collection?
I don’t care for them. There’s no air con in my room where I store my shoes. What I do is find time to clean my shoes every now and then.

What are some fond memories you have from collecting?
I made a trip to Los Angeles in 2008 and stepped into a store where sneakers were going for dirt cheap. Nike Blazer x Claw Money for USD$10, and so on, I went on a shoe rampage! Other fond memories of shoe collecting are the simple pleasures like winning a bid, getting shoes at a steal on eBay, and seeing the postman with a delivery for me. 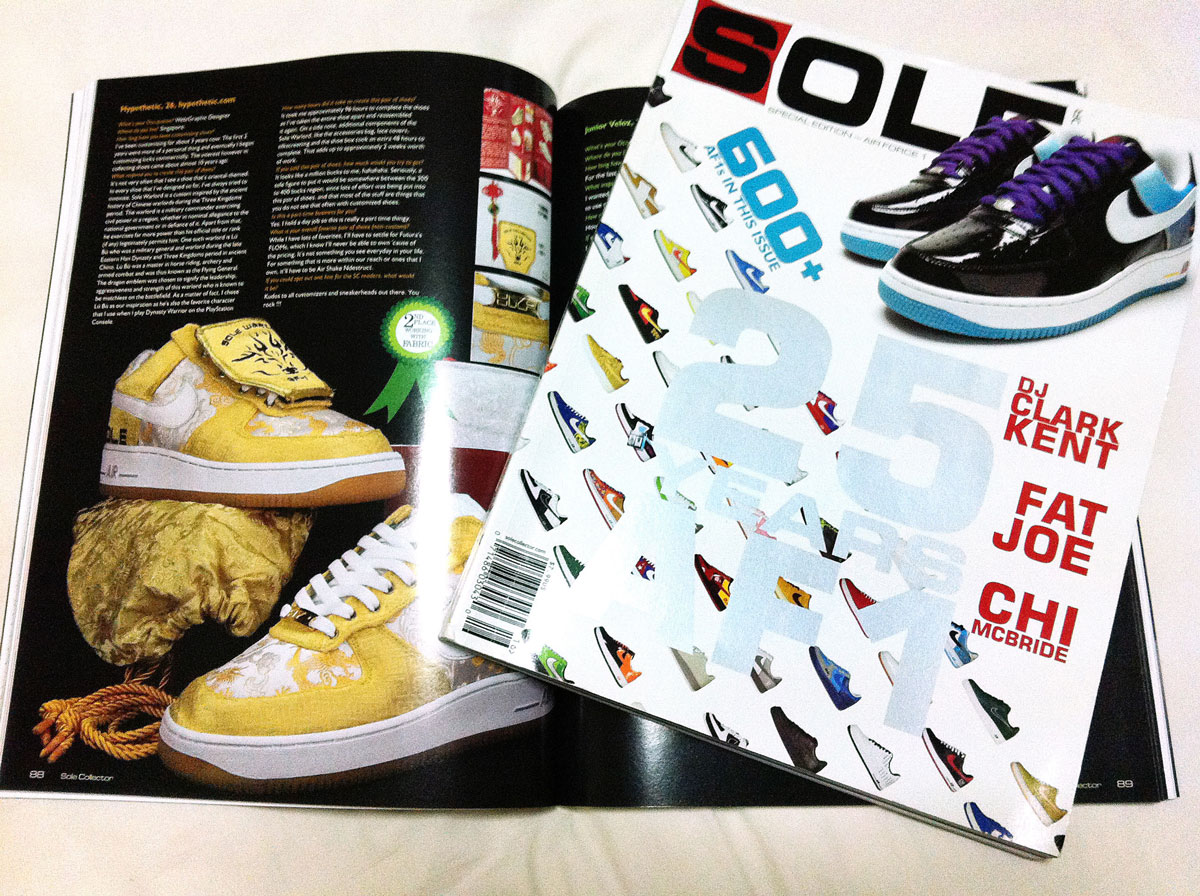 Hypethetic has been featured in various publications including “Sole Collector Magazine”

What shoes are you currently on the hunt for?
Nothing in particular but if I come across a Nike Dunk Low “Futura” sample or a Nike Dunk Low “Supreme” sample, at reasonable prices, I would try my best to cop them. I know the chances are slim as they’re too rare and will probably be too expensive. One can dream!

What would be your holy grail, unttainable or otherwise?
Nike x UNDFTD x Entourage Turtle Air Force 1 without a doubt. Only six pairs were made for the cast of Entourage. According to rumours, only one of the actors sold his off on eBay for a cool USD$25k to bid winner DJ AM who unfortunately passed away in 2009. The final resting place of that particular pair is in one of the LA-areas UDFTD stores, as part of DJ AM’s memorial. 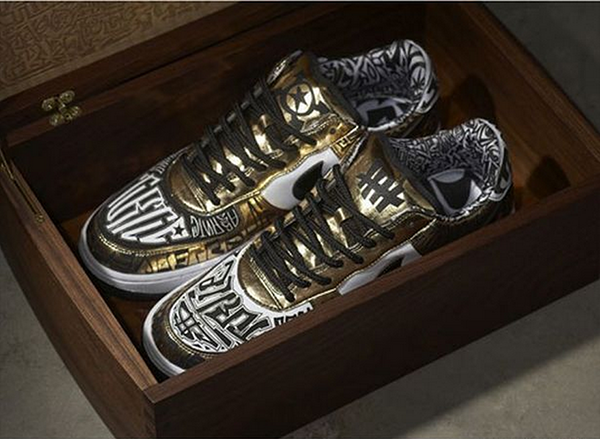 Hey Vincent Chase, please hook our man up with a pair of those grails! (Photo by: Freshnessmag.com)

Where do you intend to go from here?
Continue rocking my sneakers, not stocking! And try my best to promote the sneaker scene here where possible.

Fill in the blanks. “My friends look at my collection and they…”
Can I tell you instead what my mother said when she saw my collection? “Wah, you think you millipede, ah?”