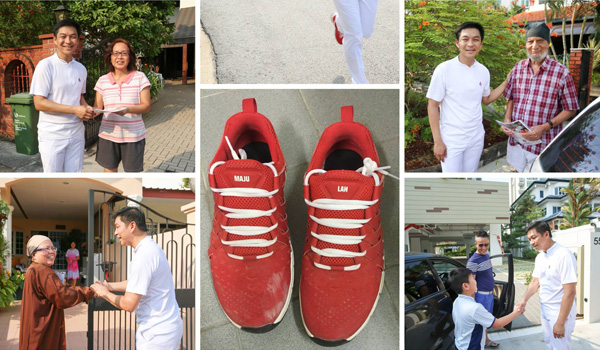 Tan Chuan-Jin rocks a pair of Nike iD custom sneakers while making his rounds in the ‘hood for meet-and-greet sessions with residents.

With Singapore’s General Elections just over a week away, the country’s politicians have come out in full force to canvass for support from the citizens.

One of them, Tan Chuan-Jin, was spotted running from house to house in a pair of Nike Free Trainer 5.0 sneakers. But those aren’t the usual trainers that you can buy from a sports shop. His version is fresh from Nike iD’s customization service and comes in the national colors red and white, along with the word “Majulah”, which is part of the phrase “Majulah Singapura” (Malay for “Onward Singapore”), printed on the tongue.

In his Facebook post, Tan pondered how long his current pair of kicks would last, given his normal routine of “twice a week house visits”. He also cited running from door to door as his “most regular form of exercise”.

We also found a short clip of Tan walking the talk and looking none the worse for wear on a blazing hot day. We’ll be adding him to our list of politicians who wear sneakers.

Posted by The Straits Times on Wednesday, 2 September 2015