Go On, Tell Your Children, The Creative Collective has Plans for You this Month

Go On, Tell Your Children, The Creative Collective has Plans for You this Month

In between illustrating, painting toys and having plenty of fun while they’re at it, Tell Your Children has found time to hook up with Mellowedhigh and Straatosphere to organize Singapore’s first street meet, SIDETRACK. 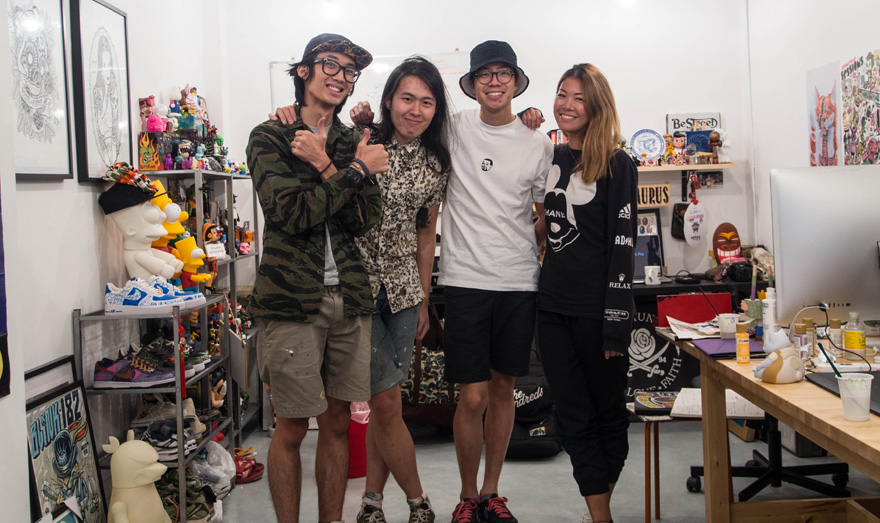 Deon Phua, Kevin Too, Lydia Yang and Russell Ong, collectively known as Tell Your Children, have been making waves in the Singapore arts scene since the group’s inception almost two years ago.

Tell Your Children also made it to the news when a sticker designed by them – that was pasted by Deon somewhere in East London – was later appropriated by renowned British contemporary art duo Gilbert & George for one of the pieces in their gallery showcase held in Singapore in January.

In May this year, the collective celebrated another milestone – moving in to its first studio space, which is located within an urban art gallery called Glitch. It was launched through an exhibition known as “Paradise Shores”, where industry people clinked beers and gawked at the four walls of the space draped in signature Tell Your Children art. This month, they join forces with street photographer Mellowedhigh and Straatosphere to co-organize SIDETRACK, Singapore’s first street meet that invites people to hang out with the crew and meet other like-minded creatives.

Happening on Saturday, September 26th, SIDETRACK will culminate in an after-party at Refuge that celebrates the conclusion of the event’s first edition and many more to come. Registration is free (and SIDETRACK participants get to enter Refuge for free; club rules apply). There’s also an event t-shirt for attendees who wanna bring home some memorabilia, get yours here!

To find out more about Tell Your Children’s origins and the plans they have for the rest of the year, order your copy of Straatosphere Vol. 3, releasing on September 22nd on Seamless.