It’s always interesting to see how sportswear companies interpret movies and its characters as sneakers. Here are 10 of our favorite movie inspired sneakers.

Fila released the Teenage Mutant Ninja Turtles in its M-Squad silhouette, first introduced in the 90s, to promote the remake of the classic childhood film. The turtle-green and orange colorway makes it quite obvious that Fila is channeling the TMNT’s most flamboyant character, Michelangelo. Fila’s involvement comes as no surprise, considering the brand had launched the Teenage Mutant Ninja Turtles x Fila FX-100 project last year.

To celebrate the release of the stop-motion animated comedy, ParaNorman, Nike produced 800 pairs of a special edition of the Foamposite One which featured a glow-in-the-dark sole and smoke graphics on the upper. The catch was that these shoes were not even available for retail; hopeful sneakerheads had to participate in a Twitter contest which required you to “post a photo of yourself as a weird kid”. Sometimes it pays to be weird.

As part of the “Horror Pack”, Nike intended to release the “Freddy Krueger” Dunks, named after the main antagonist in the film A Nightmare on Elm’s Street. However, the very first original samples, rumored to be just five pairs, were scrapped and revised. The second round of samples saw changes mainly to the colorway of the Freddy sweater and its striped design. However, Nike was implicated in a trademark infringement lawsuit brought on by New Line Cinema. These complications meant that the sneakers were never made available to the public. If you insist on owning a pair, you might be able to find one floating around online, but be prepared to splash a good amount of money on these samples.

Since it first appeared in the 1989 film, Back to the Future, the Nike Air Mag has been one of the longest anticipated sneaker to be released into the real world. So you can only imagine the hype when Nike announced in 2011 that 1,500 pairs of the sneakers were to be auctioned off on eBay, with proceeds going to the Michael J.Fox Foundation for Parkinson’s research. But before you shell out about $5,000 for a resale pair, you might want to hold your hoverboards – an updated version of the Air Mags with self-tying “power laces” is slated for a 2015 release. To promote the release of The Simpsons Movie, Vans produced a huge collaboration with 14 notable artists, including heavy hitters like KAWS, Stash and Neck Face. Five different Vans classic silhouettes were used, and each artist put their spin on the shoe as a tribute to America’s favourite cartoon family. One of the best features was the box, which featured the artist as a Simpsons character – the kinda thing that would make any pop culture x sneaker fan pee their pants. The Vans x Simpsons collection was released in extremely limited quantities, as only 100 pairs per design were made available.

Images via Rohit Bhargava and Sneakerfiles 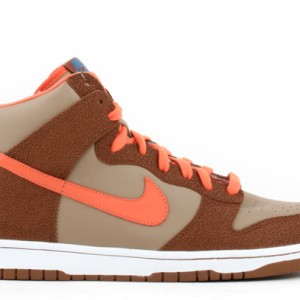 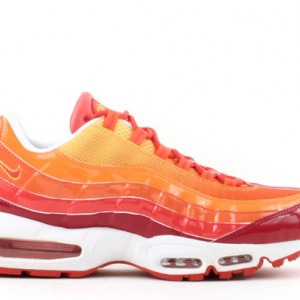 The release of the Fantastic Four movie in 2005 was made even sweeter with the “Fantastic Four” pack by Nike. The pack comprised four different models, each representing the four members of the superhero team – the Air Max 90 (Mr. Fantastic), Air Force 1 Low (Invisible Woman), Dunk High (The Thing), and Air Max 95 (Human Torch). The team’s nemesis, Dr. Doom, was represented with an Air Foamposite Pro.

Spike Lee’s 1989 classic, Do the Right Thing, which he wrote/directed and starred in was given recognition through the iconic Jordan III silhouette. No surprise that these sneakers were produced to commemorate the movie, considering many dub it one of the greatest films of all time and the film director, who also goes by his alter ego “Mars Blackmon”, featured in various Air Jordan commercials in the 90s.

When Australian sneaker magazine, Sneaker Freaker, was given the opportunity to work with ASICS for the first time in 2010, it chose to draw inspiration from the 1973 cult Australian film Alvin Purple. Utilizing one of ASICS’ most iconic models, the GEL-Lyte III, the original release was made in limited quantities. No surprise, these highly sought after sneakers were given a re-release recently, considering the current ASICS boom. 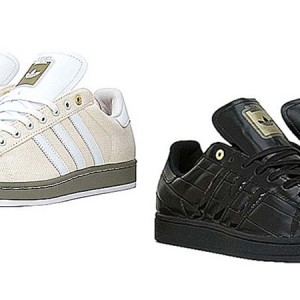 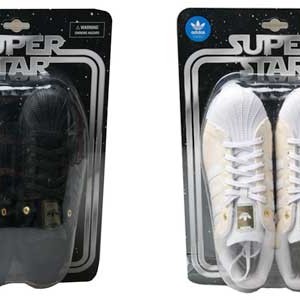 This “Light Side/Dark Side” pack was released as part of the 2007/2008 Consortium Series, drawing inspiration from George Lucas’ Star Wars series. Limited to 800 pairs, the most eye-catching feature was the creative packaging, which we conventionally see for action figures. Dubbed the “Yoda” and “Darth Vader” Super Stars, Adidas paid great attention to detail as the uppers were made to represent the characters’ outfits. Even the lace tips were made based on the color of the lightsaber of the characters.

Image via Kix and the City

The Jordans XI “Space Jam” remains one of the most highly sought after Jordan XI to date – all because Michael Jordan himself starred in this movie. It is rumored that only five pairs of the original 1996 model were produced. Since then, sneaker enthusiasts have had the luxury of a 2000 and 2009 re-release. Nonetheless, resale prices for these remain pretty steep.

Image via The Shoe Game