Comic book artists, cosplayers and toymakers made their way to Singapore awhile back for STGCC 2015. We caught up with the lovely Stella Chuu, who’s always dressed to impress. 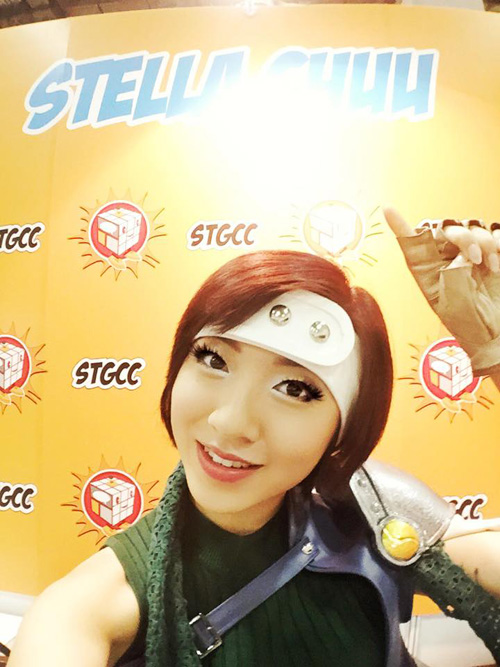 New York-based Stella Chuu has been dubbed the Anime Princess of Burlesque, having married her love for cosplay and burlesque in her costumes and performance acts. Her cosplays run the gamut, ranging from Soul Caliber‘s Ivy Valentine to Final Fantasy VII‘s Yuffie Kisaragi.

What got you into cosplaying?
Cosplay kind of happened really naturally for me, in high school I started the anime club and we had a Halloween parade, so I thought we should dress up as characters from Naruto. It was just an orange t-shirt and spiked hair, and I drew whiskers. I made everyone the Naruto headband out of tin foil. During college, I found out about conventions, went to them and that’s when I really started to think seriously about cosplay and started teaching myself how to sew and everything else.

How do you get better at making costumes?
I taught myself how to craft, sew and make props. I live in New York City and it’s really expensive to learn how to sew, because of the fashion industry here. Four sewing lesson classes can cost US$300. I learned how to sew from YouTube and from asking my friends, looking at clothes and flipping them to see how the sewing works. It’s been five years since I started, but I’m still not good enough to say that I’m a really great seamstress. Every single costume I make, I learn something new. I challenge myself with new techniques and try to figure things out.

Stella cosplays as the Widowmaker from Overwatch (Image via Stella Chuu)

What have you learned from fellow cosplayers?
They’ve taught me a lot of techniques. We like to do Google Hangouts and Skype all the time, so we ask each other about different ways to solve problems and teach each other things. We’re better at sewing but not so good at making props, so we will ask each other “how do you make that” or “what kind of glue should I buy”. Prop-making is so much more technical.

Any crazy experiences so far?
Recently, I was working for another company and my job was to stand there in cosplay and take photos. I was really hungry but I wanted something sweet, so I tweeted “can someone bring me M&Ms” and 10 minutes later, one of my fans brought me M&Ms!

Which convention is, in your opinion, one of the most enjoyable?
My favorite convention is Colossalcon. It is a convention that’s located inside Kalahari Resorts, a resort, convention center, water park, animal safari and zoo rolled into one. You can literally go down a water slide, then hang out with the baby tigers. Colossalcon doesn’t have a lot of celebrities or things to buy, but because my friends go as well, we rent a beautiful house together and hang out in the house for three days, drinking, cosplaying, playing volleyball and all these things.

Follow Stella Chuu on social media to see which characters she’ll be cosplaying next!