Go Skateboarding Day: 10 Things to Do

Go Skateboarding Day: 10 Things to Do

Go Skateboarding Day is for everyone, whether or not you’re a skater. Here are 10 skate-related activities to engage yourself in. Have fun!


“Away Days” is a full-feature skate film by adidas Skateboarding that showcases footage of skate legends Mark Gonzales, Dennis Busenitz and more. The film is available on iTunes and is well worth the watch. Just watch the trailer if you have your doubts. If you’re into the old school stuff, check out this compilation of 30 must-see skate videos that have been produced over the past three decades.

Straatosphere will be launching a skate film in July 2016 too, so keep your eyes peeled! This Saturday, June 25th, Singapore’s skate community will be gathering at Somerset Skate Park for a day of fun and activities. There will be paper shoe workshops conducted by the Tell Your Children art collective, free skate lessons from full-time coaches, a photo exhibition, waffles station and an hour-long, “Cash for Tricks Skate Jam” led by members of the skate community!

3. Plan a trip to an overseas skatepark


There’s no shortage of skateparks out there, so you should definitely check out those that are around the region. Malaysia’s Putrajaya Challenge Park, Philippines’ Mountain Dew Skatepark and Hong Kong’s Fanling Skatepark are noteworthy spots in Asia to test your skills!

Image via Whatever Skateboards

Stand out in a sea of skateboards with a spanking new one-of-a-kind skate deck. There are plenty of skateboard customizers out there, such as BoardPusher and Whatever Skateboards, that have pretty dope designs for you to choose from. For something a little more bespoke, hit up SBTG (he’s a skater too) and have him customize one for you!

Can’t bear to dump that beat-up skate deck which has a ton of fond memories attached to it? With some skills, you can turn it into a new deck that will serve you well for a couple of years more, before you lay it to rest on the skate deck Hall of Fame.

6. Try out some new moves

Besides brushing up on tried-and-tested moves, why not take this opportunity to learn some slick new tricks? Skateboardhere has over 300 tricks with easy-to-learn steps that will bump up any novice’s skill level. Remember those friends you made at the skate park years ago? Now would be a good time to reunite for a skateabout. There’s nothing quite like bonding with like-minded fellas over some friendly competition and a catch-up session. 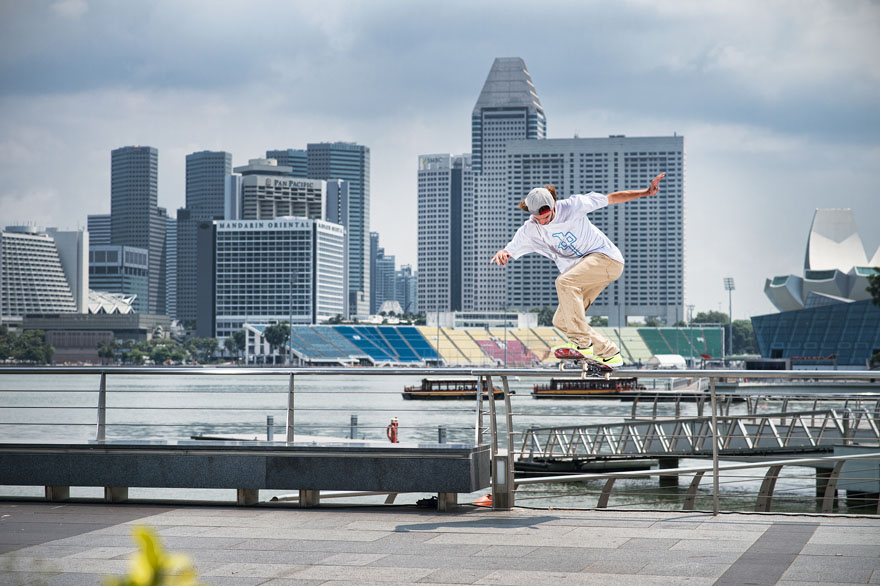 Ditch the car or bicycle and explore the city like never before, revisiting your favorite skate haunts and other iconic landmarks. While you’re at it, make some jaw-dropping moves…just don’t get caught!

9. Carve down the steepest hill

While you’re at it, take it up a notch and attack the steep hills. If you feel the need for speed, but want to avoid the spills that come with an uncontrolled descent, follow this nifty tutorial to learn how to carve down the hill in style.

10. Give your kids a lesson (or two) in skating For all your dads (and moms) who have been putting off teaching your kids how to skate, Go Skateboarding Day’s the perfect time to wipe the dust off your trusty board and impart the basics to the young ones. There’s nothing like parent-child bonding over swerves and flips.

Read More: “We Are Blood” Documents Iconic Skater Paul Rodriguez’s Journey Through the US, Spain, Dubai and China