In the lead up to 501® Day, May 20, we trace the cultural significance of one of the most enduring pieces of clothing — the Levi’s® 501® jean. Here’s how this durable workwear staple went from the mines of Nevada to the streets of New York. 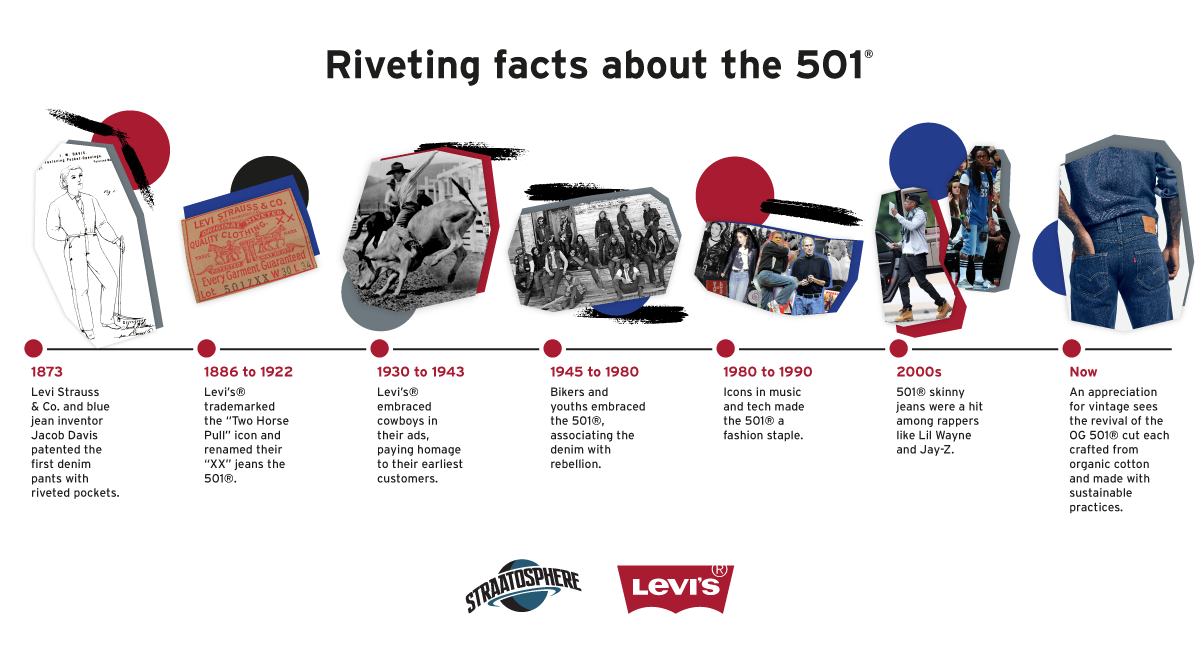 With a storied history that spans over a century, the Levi’s® 501® has been a cultural icon for generations. Its simple cut and durable construction have made it a staple of closets all over the world. Everyone — rock stars, celebrities, activists, tech giants, and presidents — have embraced the 501® in unique ways, turning it into a canvas with which they can express their personal style.

Invented 148 years ago, the 501® has survived cultural revolutions and fashion evolutions, remaining an integral part of popular fashion in every era. In celebration of Levi’s® 501® Day on May 20, we take a deep dive into the riveting stories and history surrounding this cultural icon.

1873: Levi Strauss & Co. partnered with Jacob Davis, the inventor of the blue jean to officially patent the first denim pants that had riveted pockets. The inclusion of copper rivets radically improved the durability of the jean by strengthening specific points of strain – a change that catered to the needs of blue-collar laborers and working western pioneers. Then called the XX, these blue jeans would become the template for what was later known as the 501®.

1886 to 1922: The XX would go through a series of changes before becoming the 501® as we know today. It started off with a registered trademark of the “Two Horse Pull” icon which was Levi’s® symbol of quality. In 1890, the XX would be renamed to 501®, a nod to the manufacturing batch number the denim jeans were assigned. By 1922, the 501® received a left back pocket and belt loops, thus setting the standard for the design of 5-pocket denim jeans.

1930 to 1943: Levi’s® would take small steps to set themselves apart from their competition. For one, they leaned into their relationship with cowboys who were the earliest wearers of the 501®. Over the next four decades, Levi’s® would use cowboy imagery in all their ads. To ensure the 501® never went unnoticed, Levi’s® would give the blue jean a Red Tab on the right back pocket, which was originally spelled with a capital “E”.

Post-1945: The aftermath of World War II marked a cultural shift. In the ‘50s, veterans of the war formed biker gangs to maintain a sense of brotherhood that was formed during the war. These gangs made the versatile and utilitarian 501® their uniform. The shift in reputation of the 501® from workwear essential to counter-culture uniform carried on well into the ‘70s, when young people saw the 501® as the perfect canvas for creativity and self-expression. Within this 20-year window, Levi’s® would introduce the first-ever Zip Fly and be inducted into the Permanent Collections of the Smithsonian Institution due to its cultural significance. 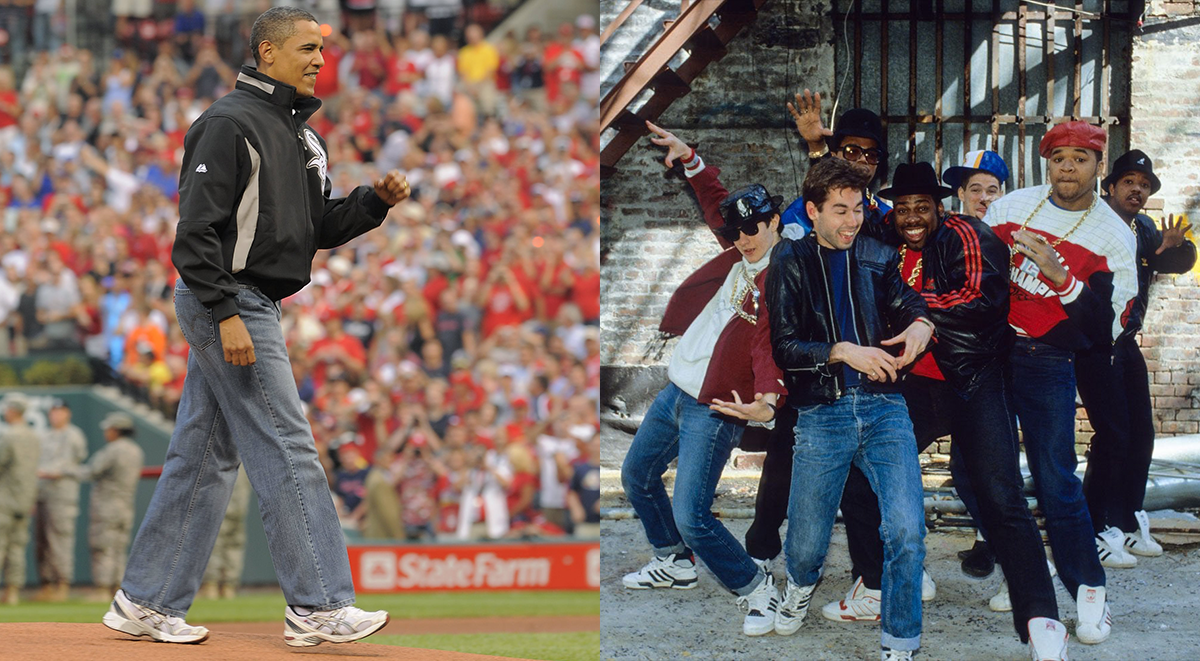 1980 to 1990s: The 501® became synonymous with popular culture. Steve Jobs was one of the most recognizable 501® fans. The Apple founder made the 501® part of his signature “uniform”, pairing the blue denim with his black turtlenecks and grey New Balance sneakers. Further solidifying its presence was its appearance on Bruce Spingsteen’s album cover for “Born in the U.S.A.”. The 501® continued to remain at the forefront of fashion all through the rise of the Grunge Movement in the ‘90s, becoming a staple for icons such as Nirvana, Pearl Jam and Sound Garden. It’s no wonder that by 1999, Time Magazine labeled the 501® “fashion item of the 20th century”. 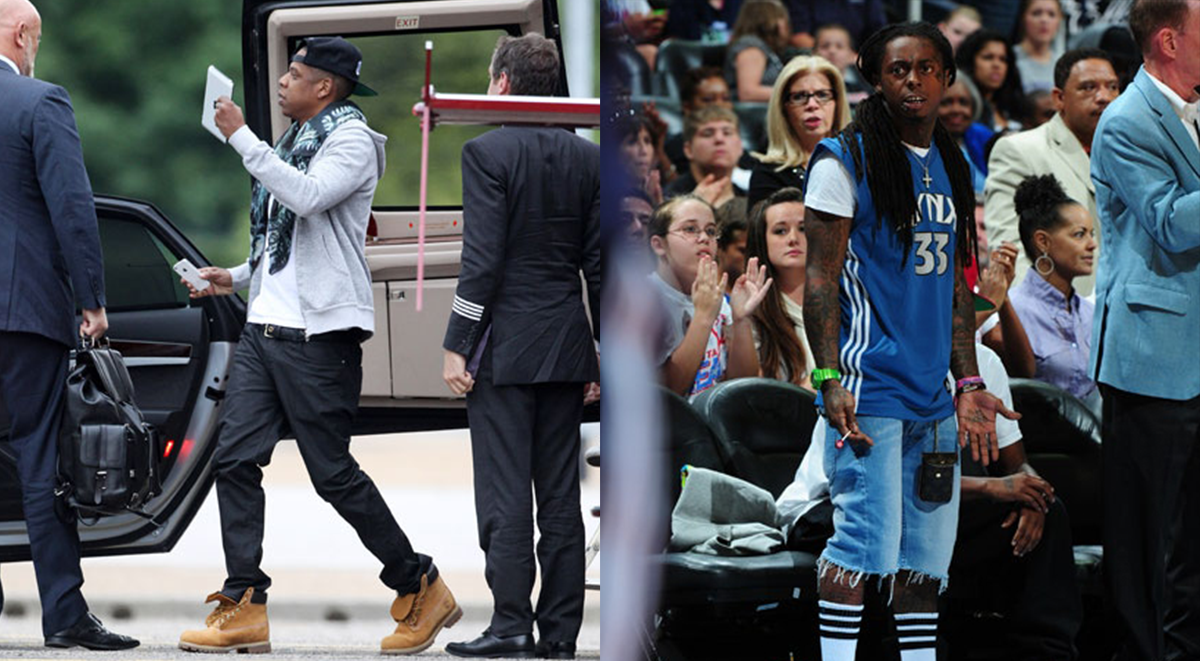 2000s: The 501® received a series of design and construction updates. From 2015 to 2017, Levi’s® would introduce 501® Originals Shorts and 501® Slim Taper. But it was the 2017 release of the 501® Skinny that really took off. It appealed to the preference of rap and hip-hop music stars for skinny, drop-crotch denim jeans, which were often paired with bright tees and coveted sneakers. Propelling the look were the music videos for Cali Swag District’s 2010 “Teach Me How to Dougie” and outfits that legendary rappers like Lil Wayne and Jay-Z would rock on stage. 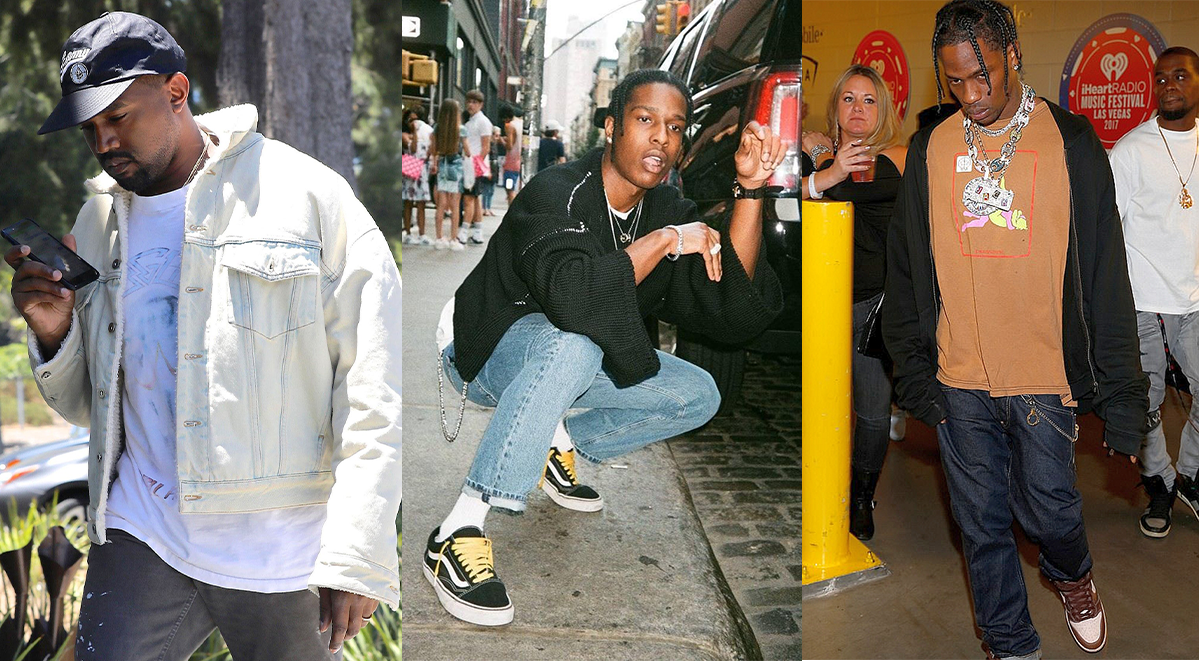 Now: Kanye West, Asap Rocky and Travis Scott are just some of the popular rappers that revived the OG loose-fit denim look from the ‘90s. They’d wear straight-cut denim stacked on their US$1,000 kicks that were paired with vintage tees under workwear jackets. This new look fueled streetwear’s appreciation for vintage apparel and in response, Levi’s® has brought back classic pairs of 501® including the 501® ‘93 straight cut, which is modeled after the jeans worn by many ‘90s icons like Snoop Dogg and Jennifer Aniston.

Head over to Levi.com.sg to learn more about the Levi’s® 501® history or visit the nearest Levi’s® store to explore the latest 501® styles available.