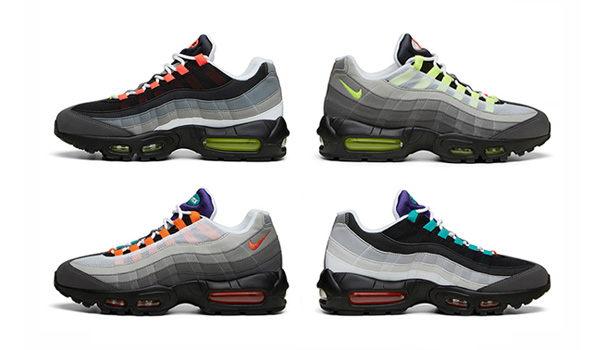 An iconic sneaker worthy of commemoration, the Nike Air Max 95 now comes in a mixture of colorways that follows the “What The” concept.

Nike celebrates the 20th anniversary of the Air Max 95, with an array of colorways and re-interpretations, including the upcoming Air Max 95 OG “Neon” with the classic PSI values featured on the outsole. But let’s not get ahead of ourselves. This week, Nike will release the Air Max 95 “Greedy”, which is the first Air Max to adopt the “What The” concept.

What’s that, you say? “What The” started on the Nike SB Dunk Low in 2007, where various iconic colorways were integrated onto the shoe’s various panels. This proved popular and has since moved across various echelons of sneakers, the most recent being the exclusive Nike SB Dunk “What The Doernbecher”.

Likewise, the Air Max 95 OG “Greedy” puts together various colorways from previous releases such as the “Neon”, “Orange Blaze”, “Grape” and “Comet”. Each colorway occupies one side of the shoe, giving it a mismatched yet unique look.

The Air Max 95 “Greedy” is set to release July 25th at Nike Sportswear retailers worldwide at a suggested retail price of £125.