The iconic Sungei Road Thieves Market may now be defunct, but the experience won’t be lost to future generations thanks to 26-year-old Singaporean filmmaker Ong Kah Jing, who goes by the moniker OKJ. 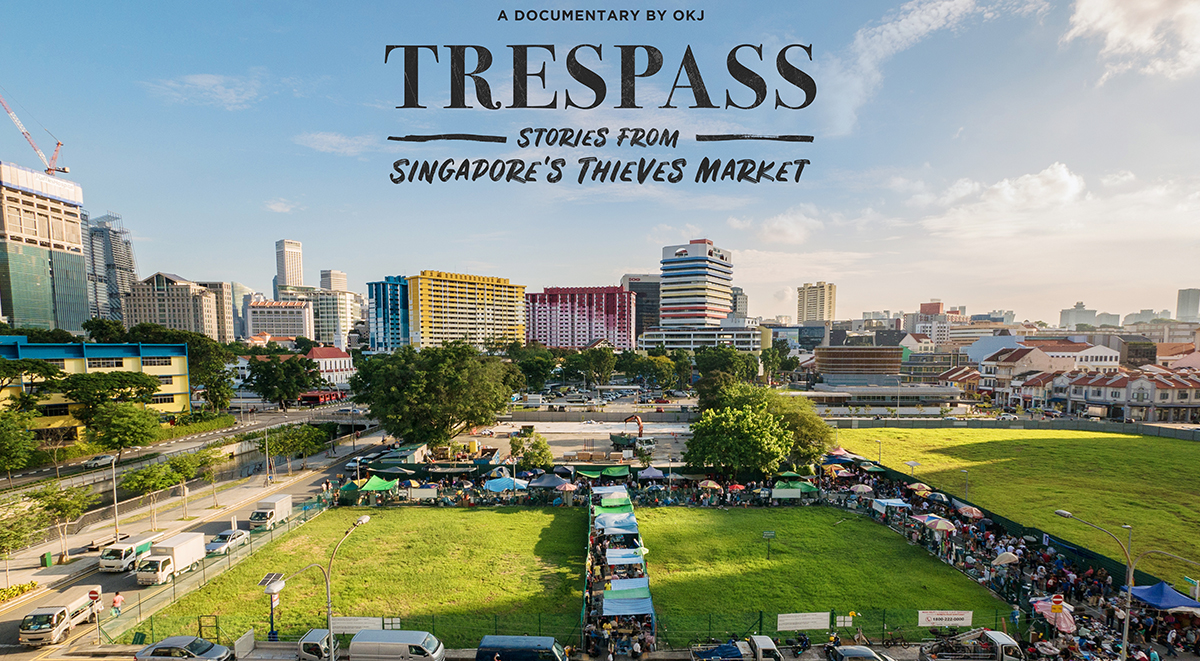 The documentary is a journey into the final days of Sungei Road Thieves Market.

OKJ’s film, Trespass: Stories from Singapore’s Thieves Market clinched Best Documentary and Best Sound Design at the National Youth Film Awards (NYFA) 2019. Here, he details his journey in pursuing the art of filmmaking and the inspiration behind the documentary on Sungei Road Thieves Market.

In July 2017, Singapore closed the chapter on one of its most iconic sites – the Sungei Road Thieves Market. It may not have been a thrift-shopping haven for archive designer pieces, but for the generations of Singaporeans who grew up during its 80 years of existence, the saying “You’ll only miss it when it’s gone” hits hard. While a walk down memory lane is physically impossible, all hope, however, is not lost.

This piece of Singapore’s history will live on forever thanks to Trespass: Stories from Singapore’s Thieves Market, a documentary by Singaporean filmmaker Ong Kah Jing (OKJ). The film takes you through the final days of the historical site, one not marred by sadness but a familiar and warm sense of nostalgia. From the sight of makeshift sheds to the conversations coming from characters that man each stall. It’s hard not to smile at the memories. For the filmmaker, Trespass seemed like an extension of himself – a step back into history, his childhood and his journey as a storyteller.

Pursuing a creative career in Singapore remains unconventional. The journey entails potential pitfalls and discouraging moments, yet, for OKJ, it’s the exploration that drives him. OKJ exudes the aura of a seasoned filmmaker; he is assured in his answers and certainly riveting when detailing the process of creating his documentaries. In truth, he never had formal education in filmmaking. His first crack at it in university – a school-led expedition to Komodo Island to shoot a documentary in the style of Animal Planet and Discovery Channel, which he grew up loving – was as he said, “incredibly painful yet enlightening. Painful because I’ve never shot anything before this. Everything was trial by fire”.

Being a business school graduate, one would think OKJ pursued an unrelated path. But on the contrary, he believes everything fell perfectly in place. “Studying business was a safety net. I didn’t plan for it, but in hindsight, that was a great decision because it allowed me to become a better producer. I know the “language” of funders and potential clients. I have control of the creative side, but I am also able to convey my pitch in an effective way to people who might not understand the process of filmmaking,” he said. Plus, the choices he made and opportunities he had in school allowed him to explore this untested passion for filmmaking. The experience helped shape his vision and build a new-found appreciation for the art form, which culminated in his second foray into documentary-making – Trespass: Stories from Singapore’s Thieves Market. “The first documentary did well. But personally, I didn’t think it was that good. I thought that if this is the best I could do, at most this can only be a hobby. But I wanted to give it another shot. This time, I’ll do it as a one-man show. I didn’t know what that story was yet, but I was certain it has to come from my own real-life experiences.” OKJ felt the need to tell a story that encapsulates the iconic place, which was also key in his upbringing.

The inspiration for the documentary also stemmed from a school assignment. “We were assigned to go to the Sungei Road Thieves Market and negotiate for something. It was the first time in well over a decade that I returned to the place. I knew I was stepping into history. The smell and atmosphere were exactly the same. Even though it was smaller, the elements made it essentially Thieves Market still. Immediately, I thought, ‘This place still exists, I have very little time left and I just want to give this place justice.'” OKJ felt there was a story there that needed telling – including his own. “Sungei Road Thieves Market is actually a big part of my childhood because it was near my primary school. A lot of my first toys came from there. But it’s all about what value I can add to the film in terms of its heritage”. He added, “When I did my research, everyone was using the situation to convey their own message, but no one was encapsulating the experience of this iconic space. That was the gap that I needed to fill.”

The film won the awards for Best Documentary and Best Sound Design at NYFA 2019, the latter of which he credits to a friend and former collegemate, Cheng Lijie, who also worked with him on his first documentary. “As I try to develop my style, hopefully, it’ll be a hallmark of the way I approach documentary-making. I want people to feel a sense of being there. I love documentaries because I have unprecedented access to places I could either not afford to, never be allowed to or can never visit. Space, factories, political scenarios, you name it. I get to be an explorer from the comfort of my couch or from the convenience of my smartphone. That’s the true value of documentaries for me: for the audience to be an explorer. Sound design is a key element to that, which is why I’m grateful to Lijie for working on this with me.” Collaborations mean a great deal to him too. Initially, he sought to create the documentary as a one-man show but that changed when he knew he had something special. “I wouldn’t let myself be the barrier to the film’s potential success. Getting professional help from editor and colorist, Eugene Seah, along with Lijie for sound design definitely made it better”. 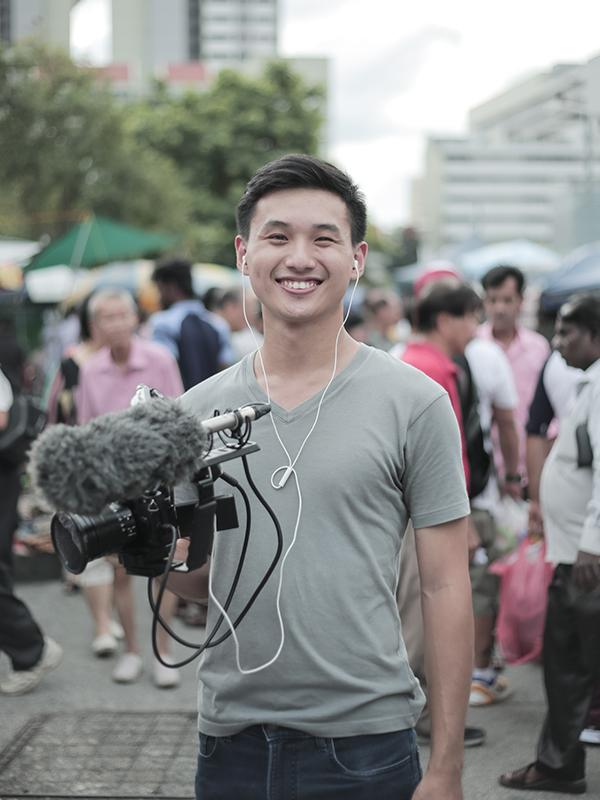 The man behind the documentary, Singaporean filmmaker OKJ.

Asked if awards validate the work he puts into the project, the young filmmaker explained that it’s not a key element. “At the end of the day, Trespass was the same film before it won the award and after it won the award. It’s the impact that’s important – whether the audience enjoyed the film or not. But winning the award gave it a much-needed momentum, and it provided me with the opportunity to resurface the film which is already into its second anniversary. Because the issues are timeless in the context of Singapore. 30 years down the road, if say, Bugis Street closes, the exact same feeling will surface for our generation,” he said.

After years of honing his craft, OKJ does feel that there can be more opportunities for aspiring filmmakers. But these are exciting times for the industry, according to the filmmaker. “This year is the second time I’ve participated in NYFA, and the quality of submissions has grown tremendously. It’s a testament to the investments and effort made to support aspiring filmmakers. That’s the reason participants keep coming back. We see value in this platform,” he explained. OKJ also hopes that aspiring filmmakers will continue to pursue their passion, no matter the challenges. “In our industry, it’s easy for us to be discouraged. But NYFA presents a supportive ecosystem and makes the process a lot less lonely”. He added, “Don’t give up. No one has come up to where they are by themselves. You’ll also need to be grateful. There will be many people involved in your potential success as well”.

But just what does the future hold for OKJ, who at 26 years old, still has a long career ahead of him? “I’ll continue to make documentaries because that’s why I started in the first place. What motivates me is the opportunity to be an explorer and the first documentary I really enjoyed was about space. We’re in this generation where space travel will become the norm. That’s precisely why my next and future projects will touch on that topic.” Not looking to rest on his laurels, OKJ is already on to his next project, titled Galactic Paint, featuring an astronomer from Toa Payoh. He has submitted the documentary to the world’s largest short film competition, My Rode Reel.

Do you have any fond memories of Sungei Road Thieves Market? Share them with us in a comment below.

Read more: Power player: Mae Tan on pushing the barriers of success as a young woman in fashion retail