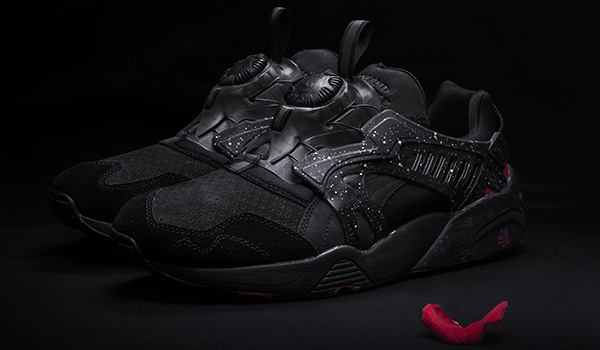 Hot on the heels of last month’s PUMA x Crossover Velvet Twin Pack “Roses” release is a follow-up that puts a dark twist on the Disc Blaze.

Booth’s near-fatal stroke in the movie and his subsequent use of an oxygen mask has been translated into a see-through disc cap on the Disc Blaze. The pitch black upper is constructed from mesh, nubuck and suede, taking references from the character’s dark personality.

A white speckled disc cage is a nod to the little shred of goodness left in Booth’s twisted persona, and a dash of pink at the heel tab is both a representation of Booth’s unpredictable behavior and a nod to Crossover’s color.

Priced at RM630, the PUMA x Crossover Velvet Twin Pack “Mystery” will be releasing at all Crossover stores on May 7th.