Singapore Vs Argentina: The Winners and Losers

Singapore Vs Argentina: The Winners and Losers

Argentina strolled to a 6-0 victory in a friendly match commemorating the 125th anniversary of the Football Association of Singapore (FAS), and there were some who ended up better – and worse – for it. Singapore vs Argentina: one of the biggest matches in Singapore’s footballing history has come and gone with a result that few would say was unexpected.

An Argentina side in holiday mode strolled to a 6-0 victory in a friendly match commemorating the 125th anniversary of the Football Association of Singapore (FAS), and there were some who ended up better – and worse – for it.

Here are the winners and losers of Singapore vs Argentina.

With tickets going for between US$40 and US$188 (before the US$4 booking fee), this was a pricey match to attend.

Unfortunately for the eager fans who rushed out to get their hands on the premium seats when sales opened, it would later emerge that most of Argentina’s star players – including Barcelona’s five-time FIFA Ballon d’Or winner Lionel Messi – would not be participating.

As any veteran of the great 100PLUS Juventus promotion will tell you, it pays to take your time when buying football tickets in Singapore.

Though no similar giveaways ran this time, the late news that the likes of Messi, Gonzalo Higuain, and Nicolas Otamendi weren’t going to play gave undecided fans the opportunity to save a few bucks by choosing the cheap seats – or by skipping the match altogether. 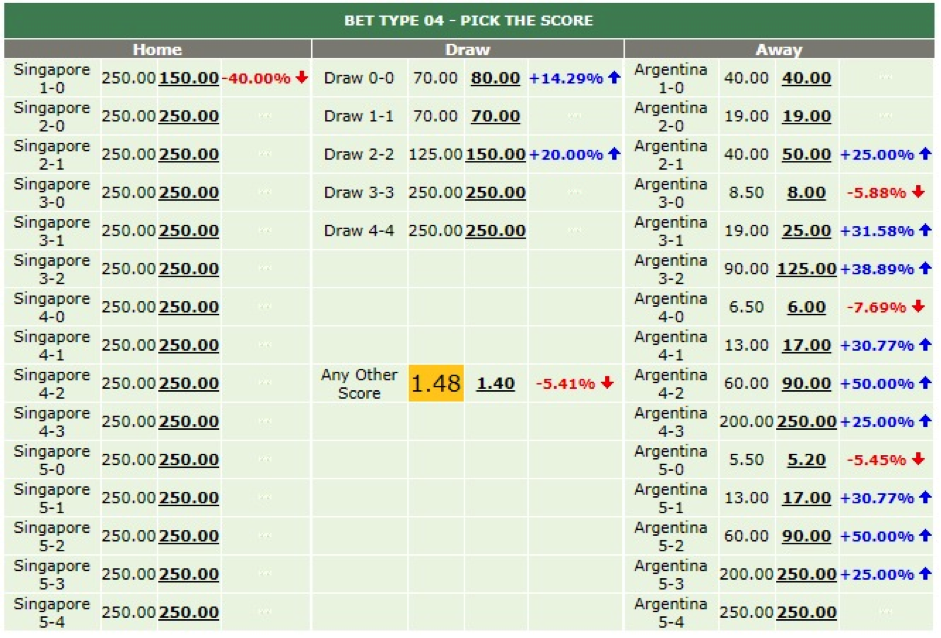 A team scoring six goals or more usually leads to a small windfall for folks who bet on “any other score”, but Singapore Pools showed impressive insight in the odds they offered for the match.

While punters would’ve been riding high with a S$6 payout for every dollar bet on Argentina winning 4-0, Lucas Alario and Angel Di Maria dashed their hopes with a goals in the 90th and 93rd minutes respectively.

The payout on “any other score” for this match? A miserable US$1.40.

In what’s probably the best story to come out of the match, The Golden Rule Barber Co got an unlikely bit of publicity when they were asked to give haircuts to members of the Albiceleste.

They were contacted personally on Instagram by Paulo Dybala who found them through a Google search. The barbers initially missed the message, but they received a call from team officials who arranged a 10:30pm appointment at the Fullerton Hotel. Search engine optimization certainly pays. They castigated their team for playing against weak opposition and celebrating goals as if they were scored against Germany, saying that nothing short of a seven-goal victory was acceptable.

The many Singaporean fans who showed up for the match in Argentina kits would’ve enjoyed every minute, and even die-hard Lions supporters had to appreciate the skills on show – not least Di Maria’s spinning backheel for the sixth goal.

The Kallang Wave was in good form, if not the Kallang Roar, and we showed that we’re good losers – one group of fans even singing a song about how terrible we were as they left the stadium. It can’t really be said that Singaporean football as a whole gained anything from this match.

The defeat was big enough for Singapore to trend on social media in Argentina with the term “la goliza” (which means “thrashing/humiliating defeat”) attached, but arguably not embarrassing enough to effect any changes that will improve the state of the game here. The Lions are currently languishing in 157th place in the FIFA World Rankings, having hit a historic low of 171st last October.

Sure, Singapore only had 22 percent of the possession. And yes, we only had one shot on goal (which wasn’t on target). But hey, for their troubles, our boys now have stories to tell their grandkids and jerseys to frame up and hang on their walls.