Singapore vs Bahrain: How the Lions Can Qualify for the Asian Cup

Singapore vs Bahrain: How the Lions Can Qualify for the Asian Cup

The Singapore vs Bahrain match will be taking place in just a bit. Can the Lions qualify for the Asian Cup? We’ll find out soon enough. 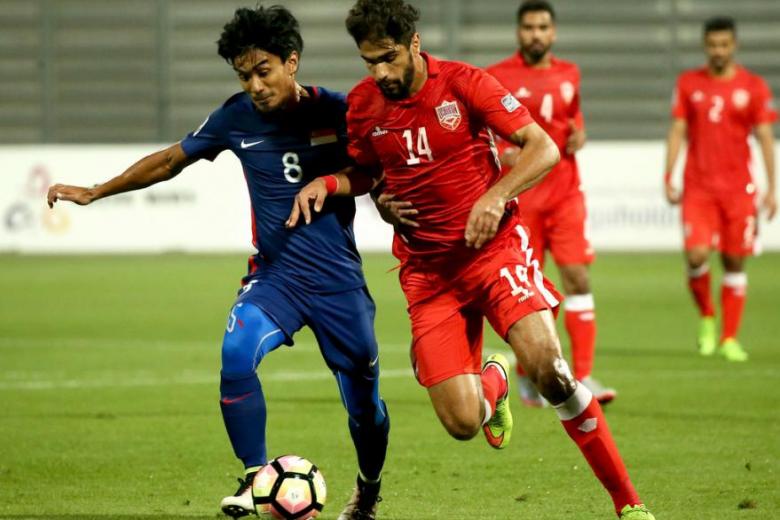 Singapore vs Bahrain: can the Lions qualify for the Asian Cup?

Singapore football is at its lowest point in living memory. The Lions are ranked 173rd in the world, and after earning only two points from four games in qualification for the 2019 AFC Asian Cup, their campaign is almost over.

Almost. Surprisingly, they still have a small chance of making it to the tournament. Here’s how it could happen.

Before thinking about any of that, however, they’ll have to beat Bahrain – anything less than victory and the Lions are out. It’s a tall order. The Gulf kingdom sits 48 places above Singapore in the FIFA world rankings, and they have an enviable record against the Lions. Singapore on the other hand just “celebrated” the one-year anniversary of their last win – a 1-0 friendly success against Cambodia.

It might seem like a lost cause, but Singapore’s best result during the ongoing winless run was the goalless draw in their previous meeting with Bahrain in March. If they can recapture the defensive resolve they showed in Riffa and hit Bahrain on the counter, they just might snatch the three points they so desperately need.

Part 2: Analyze the result of Turkmenistan vs Taiwan

Considering the remaining fixtures (Turkmenistan vs Taiwan, Singapore vs Bahrain, Bahrain vs Turkmenistan, and Taiwan vs Singapore) and the fact that Singapore can only get a maximum of eight points now, they’ll probably need some assistance from Turkmenistan. Whatever happens in this fixture won’t kill off Singapore’s hopes directly, but some results are more helpful.

A Turkmenistan win or draw would be ideal. A Taiwan win would make things nearly impossible – it would put them on nine points, out of Singapore’s reach, and it would also mean that the Lions have to hope for Bahrain and Turkmenistan to draw while they themselves try to overhaul a hefty goal difference disadvantage (currently seven goals). Seeing as Singapore haven’t scored more than one goal in a match in 19 months, this would effectively end their hopes even if they beat Bahrain.

If the Lions manage to get the better of Bahrain, they’ll face another do-or-die fixture away to Taiwan next March. The conditions will be the same – only a win will do. Another tough ask. Their 2-1 loss at home to Taiwan in June was as disappointing as the Bahrain draw was encouraging, and they haven’t won away from home since June 2016. Singapore did beat Taiwan 3-2 back in 2011, though, so it’s not uncharted territory for some of the senior players.

Even if Singapore beat the odds to claim six points from their final two games, they’ll still need a favor from either Bahrain or Turkmenistan. If the Turkmens win both their remaining fixtures (or draw against Taiwan and beat Bahrain) and the Lions win both of theirs, then the two countries would qualify for UAE 2019. Things get a bit complicated otherwise.

Assuming Singapore ends up with eight points, here are the other endgames where they could qualify:

If Turkmenistan draw with Taiwan and lose to Bahrain, Bahrain would qualify with either Singapore or Turkmenistan following depending on goal difference.

If Turkmenistan beat Taiwan and draw with Bahrain, Turkmenistan would qualify and Singapore would have to win big against Taiwan to account for Bahrain’s far superior goal difference.

If Turkmenistan lose to Taiwan and draw with Bahrain, Taiwan would qualify and the other three teams would be split by goal difference.

If Turkmenistan draw both remaining games, Turkmenistan would qualify and Singapore would again have to contend with Bahrain’s goal difference advantage.

Is this scenario realistic? No, not really. Is it possible? Just about. As that old adage in football goes, stranger things have happened.

Watch the journey begin (or end) at the National Stadium on Nov 14. Tickets are available for $14 from Sports Hub Tix. Follow the Football Association of Singapore on Facebook for live updates of Singapore vs Bahrain, and screening information (last week’s Singapore vs Lebanon friendly was streamed live on the Eleven Sports Facebook page).

Read More: 8 Teams Ahead of Singapore’s Worst FIFA World Ranking of All Time