Much of Cambodia’s golden age of rock’n’roll spanning the 1960s and early 1970s was eradicated by the country’s communist dictator Pol Pot, who banned all arts that didn’t fit his propaganda. But the country’s rich heritage of surf rock and psychedelia is currently enjoying a resurgence as contemporary bands like the Cambodian Space Project (CSP) merge Khmer pop and soul melodies with powerful guitar riffs. 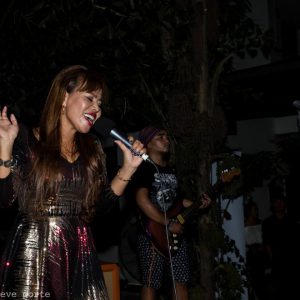 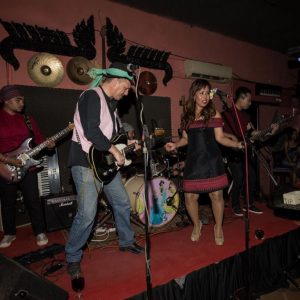 Whereas CSP covers the more groovy and kaleidoscopic rhythms of Khmer rock, Channthy Cha-Cha encompasses a more old-fashioned, traditional sound, she explained before the band’s performance at the French Institute in Phnom Penh last weekend.

“I’ll still be performing in both bands but Channthy Cha-Cha is a chance for me to be in charge and try out different styles than Cambodian Space Project.”

Despite a life of extreme hardship from civil war and poverty, music has remained a constant source of joy for the charismatic vocalist, who cites Tina Turner as one of her style icons. “I’ve always loved old Cambodian songs for their playful references.”

For example, “Old Pot Still Cooks Good Rice” by prolific 1960s singers Sinn Sisamouth – dubbed the Elvis of Cambodia – and Ros Sereysothea is about a wife showing off to her husband to prevent him from chasing younger women.

After getting together towards the end of last year, Channthy Cha-Cha now has a few original tracks and covers under their belt – some of which are more cha-cha whilst others fall into the popular Khmer folk genre known as romvong, explains rhythm guitarist Scott Bywater, who was also one of CSP’s founders. The band’s other members include bassist Phea, Rathana on drums, Narith playing keyboards and solo guitarist Borin.

From big band to mambo to rock to afro-Cuban, Cambodia’s lost musical era had it all. Channthy Cha-Cha took us on a little tour of memory lane to discover more.

Known as the second lady of Khmer music from the 1960s to 1970s, Pan Ron is Channthy’s favorite Cambodian singer. This track is a Khmer version of Cher’s 1979 rendition of “Bang Bang (My Baby Shot Me Down)”. Also by Pan Ron, this is a Cambodian rock staple; its title translates to “Monkey Dance“.

“1960s wild man Yos Olarang sings this song from the point of view of a cyclo driver driving around Phnom Penh,” explains Scott.

Pam Rom is Pan Ron’s younger sister, who also achieved fame in the industry. Channthy Cha-Cha likes to blend this track with the riffs from Cream’s “Sunshine of Your Love”.

“Cambodians love to dance. The Twist dance craze first appeared in Cambodia in the early 60s with this song called “Twist Twist Me”,” says Scott.