All Decked Out: 10 Skate Brands That Got Trendy

All Decked Out: 10 Skate Brands That Got Trendy

In celebration of Go Skateboarding Day, here is a rundown of skate brands that left the park and hit the streets.

Kicking off this list is one of the most prolific, OG skate brands: Thrasher. The magazine was pretty much the word of god for skaters around the world, and their t-shirts became a skate staple.

There’s been a trend of non-skaters wearing skate brands since time immemorial, but recently people have taken to wearing Thrasher t-shirts a lot. It started out with girls wearing their boyfriends’ shirts, and was further popularized by Vetements taking cues from the flame font and applying it onto their line of hoodies. Of course, veterans of the game weren’t happy, which resulted in a bunch of amusing tweets:

Like Thrasher, people had the same complaints about wannabes wearing Supreme threads back in 2011. It’s all been one big petty version of the You Can’t Sit With Us meme.

Supreme was established as a skate brand, but through the years, it has become known as one of the game-changers for streetwear. Attractive collabs aside, the fact that each drop is available in limited quantities means fanboys line up for hours just to get their hands on Supreme anything. Couple that with the rise of the re-selling culture, and the brand has gained a cult status that only seems to get crazier by the day.

Ever since Palace came around, triangles have taken on a whole different meaning. While Palace has received its fair share of flak (being labeled a “hype” brand), it has certainly solidified its status in the fashion realm, having been worn by the likes of Drake and ASAP Rocky (who now fronts Dior – what?). Plus, have you seen its collab with adidas Originals? All these factors make Palace hard to hate on. 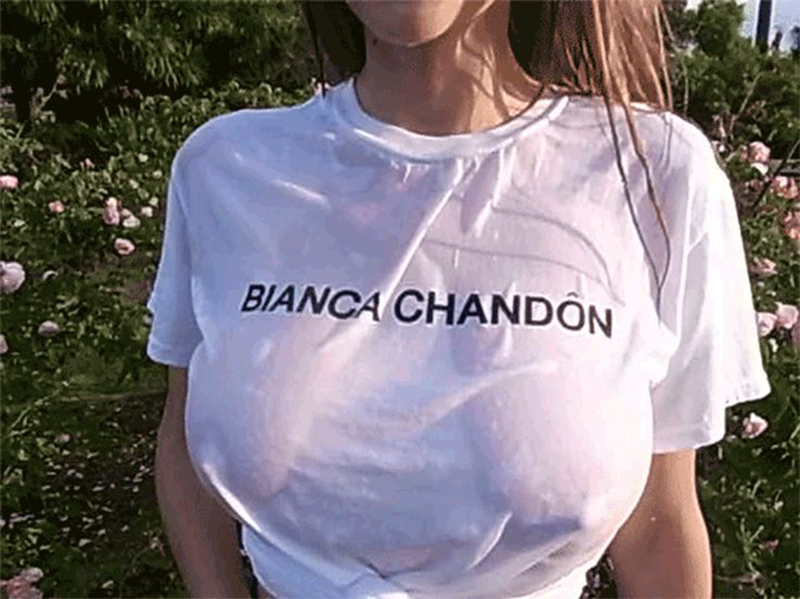 Pro-skater Alex Olson started Bianca Chandon with the aim of being a skate brand that does something “a skateboard company does not do”.

Most noteworthy has been the way the brand marketed its launch. Olson released a phone number, which got curious people calling in. What they would hear at the other end of the line was a girl’s name – Bianca Chandon – which turned out to be the name of the brand itself. Turns out giving out your number is a sure way to get people talking.

Another brainchild of Alex Olson’s (see above), Call me 917 has been described as “more for skate rats, less chic” by Andrew Brown, who collaborated with Olson on a range of tees.

But that didn’t stop Dover Street Market from calling, and the once super niche Call Me 917 answered. Pretty soon, the brand described by Olson himself as “a real core skate thing only at selected skate shops” was sharing racks with non-skate brands the likes of Comme des Garcons and Gucci. Peep the skate film titled after the collection, featuring Olson doing his thing on the streets. Dime’s DNA seems to embody a group of friends chilling out and deciding to do some stuff lest they rot away in the summer. And that’s exactly what they are; a crew of skaters who dabble in videos sometimes, as well as pushing out clothes. But they aren’t in to be serious business moguls, preferring to keep it light-hearted. Their clothes are easily recognizable, and can be worn in and out of the park. Noah was born out of a revival of a side project Brendon Babenzien once dabbled in. Babenzien being the guy who helmed creative direction at Supreme for 15 long years.

With such a powerful resume in hand, Babenzien was off to a good start with Noah. And yet, he never set out to woo big money: “I’m not trying to be a big brand that is considered fashionable. I want to make good things and see where that can lead us. I want a natural growth,” he once said. Technically, this brand was started by a kid. Blondey McCoy, an 18-year-old skate rat from South London, originally put Thames London together as a DIY project at the age of 15, gifting his skater friends funny stickers and shirts.

A few years later, he’s dabbling in the whole cut-and-sew shebang, complete with embroidery and naming Vivienne Westwood as an inspiration. We’re keeping our eyes peeled to see where McCoy takes Thames London.

This New York skate brand needs no explanation. Alltimers has been known as the crazy kids taking pop cultures icons to new levels with their wacky board shapes, some of which were modeled after Rihanna and Marisa Tomei. The brand has also been hard at work putting out skate movies, as all skate cliques do, with an ironic twist.

Proving itself to be not all about fun and games, Alltimers secured a collaboration with adidas Skateboarding back in 2015 to release a special edition of the Superstar Vulc. Ever the class clowns of skate, Alltimers also released the We The Best board in the same year, dedicated to the infamous DJ Khaled and his antics.

Polar Skate Co has been making waves since the start in 2011, especially after its collaboration with Carhartt WIP two years ago. The label’s insignia is kept simple, just like most of its apparel, making it the perfect brand for new-gen skaters. The creator of the brand, Pontus Alv, has also premiered his widely acclaimed film, I Like It Here Inside My Mind, Don’t Wake Me This Time earlier this year. Judging from the dark tone and stark VHS visuals, this film is suited for the skaters as well as art film buffs. Be sure to check it out!