Bad news Yeezy fans: the Yeezy 350 V2 Bred will not be restocked this year after all. 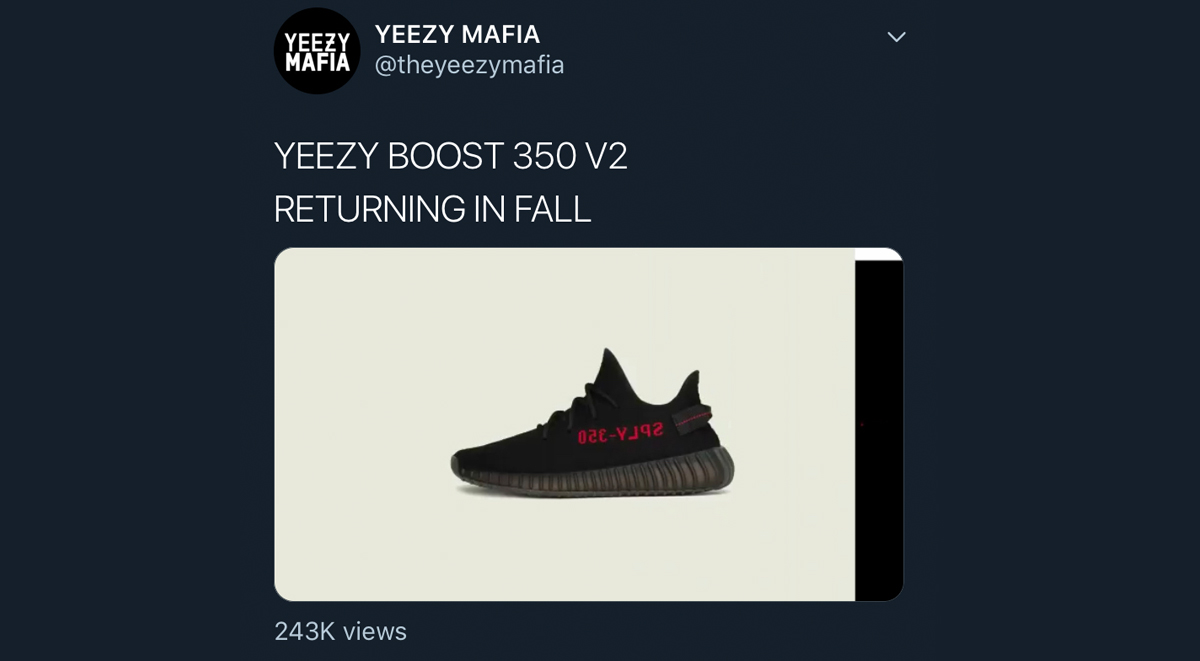 The rumors were debunked on Sunday, June 16, by Jon Wexler, the Vice President of Adidas Global Entertainment & Influencer Marketing.

Restocks of Kanye West’s most popular sneaker model have become common in recent times – the Yeezy 350 V2 Cream White, Zebra and Semi Frozen Yellow come to mind. When leaked information of the Yeezy 350 V2 Bred restock surfaced via the reputable Yeezy Mafia, fans were rightfully quick to believe it. The tweet (image above) posted last Saturday revealed an image of the sneaker with the caption, “Yeezy Boost 350 V2… Returning in fall.”

But the excitement (and dissent for some) lasted no more than a day, with Jon Wexler himself delivering the cold hard truth on Twitter. Retweeting Yeezy Mafia’s post, the man responsible for bringing Kanye West into Team Adidas simply responded with “#fakenews”. In response, Yeezy Mafia deleted the tweet in question, which all but confirms that the Yeezy 350 V2 Bred won’t get a second coming.

Good to hear, I appreciate how the Yeezy brand wants to expand and increase its global volume but some pairs need to remain off limits (at least for the foreseeable future)

For sure bro, I have most of the original releases, I remember paying resell for my TD, PB and Belugas & that feeling of copping my first retail Yeezy (Oreos) will never be forgotten. I don’t mind new colourways being mass produced but keep the originals for those who cared then

One fan seemed relieved to hear the latest revelation, saying that “some pairs need to remain off limits.” With Yeezys being released almost every other week now, fans who went through the era when the sneakers were practically unattainable should be able to hold on to that memory. Otherwise, the hype for Adidas’ money-making silhouette might just fade away like the once in-demand NMDs.

Would you try to cop the Yeezy 350 V2 Bred if the restock ever happens? Let us know in the comments below.

Read more: Here’s how you can cop the Europe-exclusive Yeezy Boost 350 V2 Antlia in Singapore