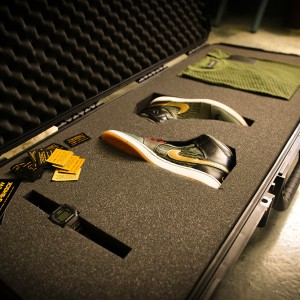 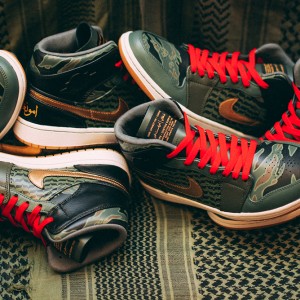 Singaporean artist SBTG joins forces with Dubai-based street wear label Amongst Few and Casio (Middle East) to release a jaw-dropping limited edition capsule collection. It comprises a pair of Air Jordan 1’s, a premium t-shirt and a G-Shock DW-5600E watch, all of which are draped in the traditional Arab Ghotra pattern that’s a common love between the three entities.

It is this pattern that forms the inspiration for this project, and SBTG exercises his excellent craftsmanship by hand-painting it to the side panels of the sneakers, in addition to his iconic Tiger Camo pattern on the toe box and ankle collar. Additional features include a unique Amongst Few x SBTG label on the tongue and an Arabic transliteration on the heel.

Amongst Few revamps its classic Ghotra pattern t-shirt, made with 100% Peruvian mid-weight cotton, by giving it a military-inspired olive colorway and detailing that includes the same label found on the tongue of the Air Jordan 1. Completing the set is Casio’s G-Shock DW-5600E “Alpha Foxtrot 3” that features two variations of the Ghotra pattern along the length of the strap, with Arabic-style branding at the top of the strap, close to the watch face, providing the final touches.

“Last November, I was invited to Sole DXB in Dubai by luxury shoe chain Level Shoe District. I met Mike and Flo from Amongst Few, and they brought me to their booth to introduce me to their brand. I was impressed with the quality and direction that the brand was going, but what caught my eye was a custom G-Shock in their showcase which featured the Ghotra pattern,” SBTG said.

“Coincidentally, I used an alternate pattern on my G-Shock several years back. We found out that we had more in common and stayed in touch, eventually deciding to get together for this collaboration,” he added.

The Amongst Few x SBTG x G-Shock “Alpha Foxtrot” Capsule Collection will be released on April 2nd at Meet d3 in the Dubai Design District. Only 12 sets are available and they retail for US$800 each. The t-shirts, limited to 100 pieces, can be purchased separately. Interested buyers can pre-order the collection via info@amongstfew.com. The Custom iSeries 4217-7 Rifle Case is not included in the collection but can be purchased for US$544.