Arsenal’s 2016/17 home kit pays homage to the history of the club by bringing back a classic look from the 90s. 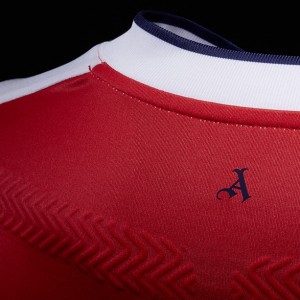 Inspired by the managers, players and moments that defined Arsenal throughout the 90s, the new home kit comes with striking new aesthetics borrowed from the club’s heritage.

On the jersey, PUMA’s iconic T7 formstripe runs along each cuffed sleeve, and together with the dropped tail design, lends the jersey a refined look.

Modern graphics are printed on the jersey and the letter “A” in a gothic font, taken from Arsenal’s previous club crest, is prominently printed on the back of the neck area.

Performance-wise, the new kit features PUMA’s new apparel technology ACTV Thermo-R, strategically inserted in both the front and the back of the shirt to help players maintain an optimum body temperature. A unique phase-change material is injected into the shirts’ inner athletic tape, which allows micro-capsules to absorb excess heat and release it back to the body when needed.

The taping in the shirts provide an extra snug fit, micro-massaging the skin in specific areas to enable a faster, more effective energy supply to the active muscles.

The shorts in the new kit are white and accompanied by red bands along the sides. The socks are red and flanked by the white PUMA logo at the front and a white fold at the top.

While the Men’s Team will not be wearing the new home kit till next season, the Arsenal Ladies Team will debut the kit on May 26th, when they play a friendly against the Seattle Reign at the Memorial Stadium.

Arsenal’s 2016/17 home replica kit costs S$109 and will be available at PUMA and Weston retail stores from June 3rd onwards.