Mike Cherman, the Chinatown Market founder and designer talks bootlegs, his print guns and the importance of DIY. Mike Cherman rocked up to Singapore recently, print guns blazing, to launch the Fall/Winter 2018 collection of his label, Chinatown Market.

From gifting LeBron James a 1-of-1 pair of custom Chuck 70s to receiving a cease and desist from the Smiley company, it has been a wild ride for Mike Cherman since he started his brand Chinatown Market in 2016.

We caught up with Mike at Seek store Singapore, which was the launchpad of Chinatown Market’s Fall/Winter 2018 collection in the Southeast Asia region. We found out more about his fascination with bootlegs, the importance of DIY, and his plans for the future.

Chinatown Market is heavily inspired by bootleg designs, is this your way of flipping the script on bootlegs?
We’re not out here trying to just make a bunch of money or get a crazy amount of sales. I do bootlegs to have fun and to create an idea that is prohibited to me. The idea for us is to inspire kids to go out there and do it themselves. I don’t go and make thousands of pairs of Converse Nikes to make money. I made five pairs and gave one to LeBron, and now thousands of kids have made some themselves. Even though Nike and Converse won’t let it happen, kids will make it happen themselves. I’d rather inspire DIY.

How did the idea of using the print gun at your launches come about? What are some of the craziest things you have printed on using the gun?
I saw a YouTube video online where some construction worker was printing on the ceiling and the floor and I was like… T-shirt. I put it online and now has over 500 million views and it just took a life of its own. We have been doing tons of customizations before that, but this is one of the first ones where we introduced people to a new way of doing it. It’s instant gratification. Gucci bags, Goyard bags, things that cost upwards of five to ten thousand dollars, things that you’d think would make people go, “I don’t wanna print this,” but with the print gun, people don’t care for some reason. So it’s fun. We’re gonna print a Rimowa bag today, which is worth like a thousand dollars.
Advertisement
Scroll to continue with content 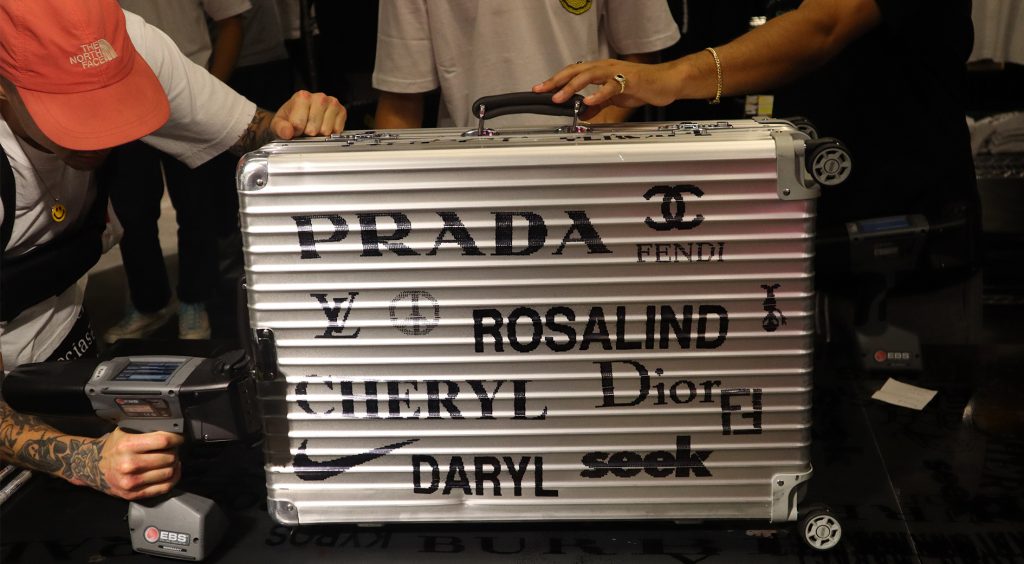 “I’m not sitting here thinking I’m the hottest shit in the world. I just focus on working. I don’t party, I don’t drink, I don’t go out, I just work.”

How many people in the world have your bootleg Converse Chucks, aside from LeBron and Snoop?
I’ve made them for LeBron, Snoop Dogg, Russell Westbrook; maybe around 20 to 25 pairs? You can go to China and buy it in the bootleg market. I’m not gonna sit here and be like, “I own this” because I don’t. It’s two other company’s logos and brands. The reality for me is that I’m just inspiring kids to go out and do it themselves. We made something that everyone wanted. If it came out right now, we’d want it right now. That’s the whole idea – just go buy a pair from Converse and make it for yourself. Get a Nike swoosh stencil, get some paint markers, and just do it. Don’t wait for it to come out; that’s just being a consumer, go and inspire yourself and do it with your hands. And that’s why I question when luxury brands like Balenciaga go and make a 1,200 dollar denim jacket. I’d rather get a Levi’s jacket that costs 20 to 50 dollars. I don’t know. I just find that certain things in luxury start to be questionable. I believe luxury is only luxury when it is elevated beyond something that can be attainable, something that a streetwear brand cannot do.

You mean things like the Balenciaga double shirt?
I can appreciate some of that shit because I’m not gonna go make that. I can’t go make that. I can’t go make that runway piece where he made the 10 jackets all stacked on top of each other. That’s crazy, luxury, cool. It’s dope to see but at the same time, I have to give respect to them because look at what they are doing in the luxury market, basically playing it like it’s streetwear. It’s cool. You walk into Balenciaga and it looks like it’s a streetwear store.

We know you have a Tell Your Children collab tee too. How has it been like collaborating with TYC?
They’re awesome and they’re creative and some of the best creatives in Singapore. At least to me.

Would you have ever thought your brand and reach could go all around the world and reach this little country?
Of course not man. I don’t have any ego with this shit. I’m not sitting here thinking I’m the hottest shit in the world. I just focus on working. I don’t party, I don’t drink, I don’t go out, I just work.

What are some trends in streetwear that you wish would die?
Kids kinda just being ignorant. They don’t know any history, they don’t do the research, they don’t know where something came from. So often you see kids being like, “They’re copying them” and it’s like well, no, this is actually from 20 years ago – just funny stuff like that. I think that many kids don’t have the education, and don’t have any right or reason to be commenting. And not to say that I’m mad that kids are commenting on Chinatown Market, it’s not about that; it’s just that I see friends of mine that put out awesome creative ideas and then someone’s like, “You copied this.” I think there’s something to be said about just appreciating creativity as a whole.

Keep up with Chinatown Market – @chinatownmarket.

This Mike Cherman interview has been edited and condensed.