The Pronto Denim Carnival 2019 takes place, as it does annually, in the heart of Bangkok, at Parc Paragon.

Now into its sixth edition, we’re kicking ourselves for not having discovered the Pronto Denim Carnival earlier. Thankfully, it’s not too late yet to attend the event this year.

The Pronto Denim Carnival is organized by Pronto, a denim store with more than 10 outlets across Thailand. Its founders, the Sachdev brothers, are obsessed with denim, not just for its sake, but for how it’s made.

The first Pronto store came about in 2006 to redress the fact that people were buying things more for how they looked rather than how they were manufactured. The idea was that Pronto would introduce people to brands that were perhaps unheard of in Thailand then and educate people about paying for quality denim that could be worn for years.

It’s 2019, and this message still rings true. Against a backdrop of excessive consumption, hype culture, and buy-to-flip behavior, paying a higher price for something that lasts teaches us to treasure the things we own more, and for longer.

Now more than a decade into its operations, Pronto has become an authority on denim and a permanent pin on the Google maps of denim-heads traveling to Thailand. 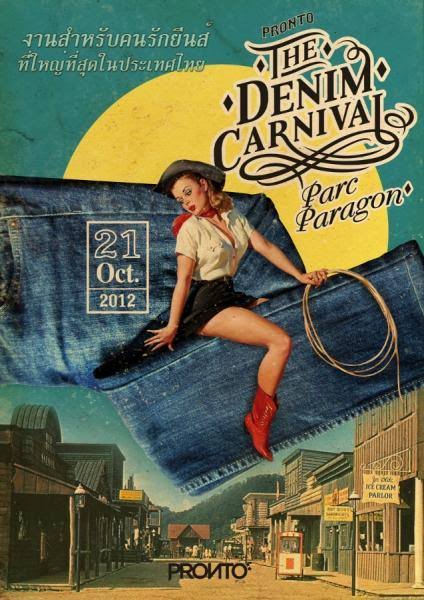 A poster for the 2012 edition of the Pronto Denim Carnival.

Pronto’s reputation is what enables it to run an event like the Pronto Denim Carnival so successfully. Events are measured by numbers, and Sunny, one of the Sachdev brothers and Pronto’s creative director, tells Straatosphere, 20,000 people show up to the Carnival each time.

Another feat that the Pronto Denim Carnival manages to pull off is that the event is personally attended by the people behind the denim brands from all over the world. With them, they also bring along event-, no, world-exclusive merchandise that people can purchase only at the event.

If you’re not familiar with any of them, the idea is that you will be by the end of the Carnival. Brands take to the stage to introduce themselves and also run their own booths that offer games and giveaways – much like a carnival. We’re told there’s also a 100-people-rock, paper, scissors game that sounds both intriguing and, by Singapore standards, like it’ll be a mob.

The Pronto Denim Carnival 2019 will be held on Sunday, November 24, at Parc Paragon, Bangkok, from 12pm to 8pm. Admission is free and conveniently, booths take both card and cash.

Pronto usually holds small workshops in the week leading up the event, so keep tabs on that by following the store on Instagram (@prontodenim) and Facebook.

If you’re traveling to Bangkok for the Pronto Denim Carnival 2019, book your accommodation on Booking.com via this link, so you can enjoy a S$40 reward.