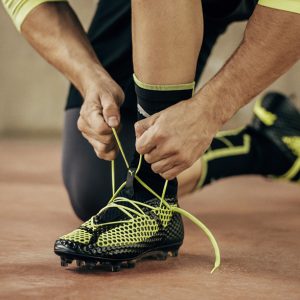 The Puma Future 18.1 is currently priced at S$299 instead of the previously reported price of S$229.

Straatosphere apologizes for any inconvenience caused.

The sneakers will feature a NETFIT outer that allows wearers to lace the football boot up to create the perfect fit.

NETFIT technology, which was launched in July this year, gives wearers unlimited lacing options – these can range from narrow foot lacing and heel support lacing, just to name a few. The technology has been applied to a range of sneaker models including the Speed Ignite NETFIT, as worn by Usain Bolt.

In addition to NETFIT tech, the PUMA FUTURE 18.1 will sport a new RAPIDAGILITY outsole, making the boots lighter than usual. It’s made with PEBAX, a resin material known for its light weight and durability.

The football boots come in a striking neon yellow and black colorway. Other aesthetic features include matching laces and PUMA branding in neon yellow.

The PUMA FUTURE 18.1 will be available at select football retailers and at Weston Corp outlets from Wednesday, November 22. Each pair is priced at S$229.