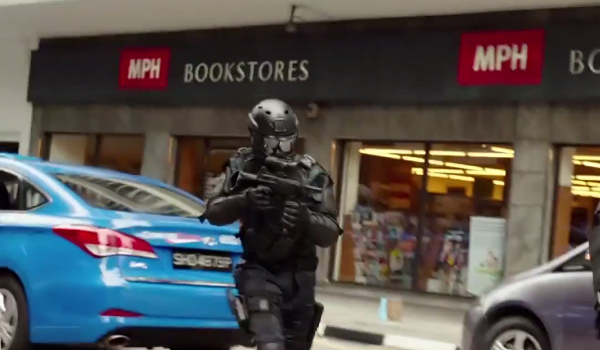 Hollywood comes to Singapore via its latest thriller, Hitman: Agent 47. Don’t believe? Check out the trailer and poster.

Hollywood came knocking and Singapore responded by offering its beautiful urban landscape for the upcoming action film Hitman: Agent 47. As early as last May, actors from the movie were spotted filming in several prominent locations such as Gardens by the Bay and the Central Business District. The latest trailer scintillates with an action sequence taking place in Singapore’s very own McCallum Street. It remains to be seen if the landmarks featured in the movie poster, such as Marina Bay Sands and the Singapore Flyer, will grace the silver screen when the movie arrives on 27 August 2015. Nonetheless, Singapore will definitely be more than just a fleeting glimpse in the highly-anticipated blockbuster. Who knows, Hitman: Agent 47 might just pave the way for more major film productions to be shot here in time to come!