We took the opportunity to hang out with the sneaker customizer from Down Under when he popped by for the Singapore Toy, Games & Comic Convention 2014. 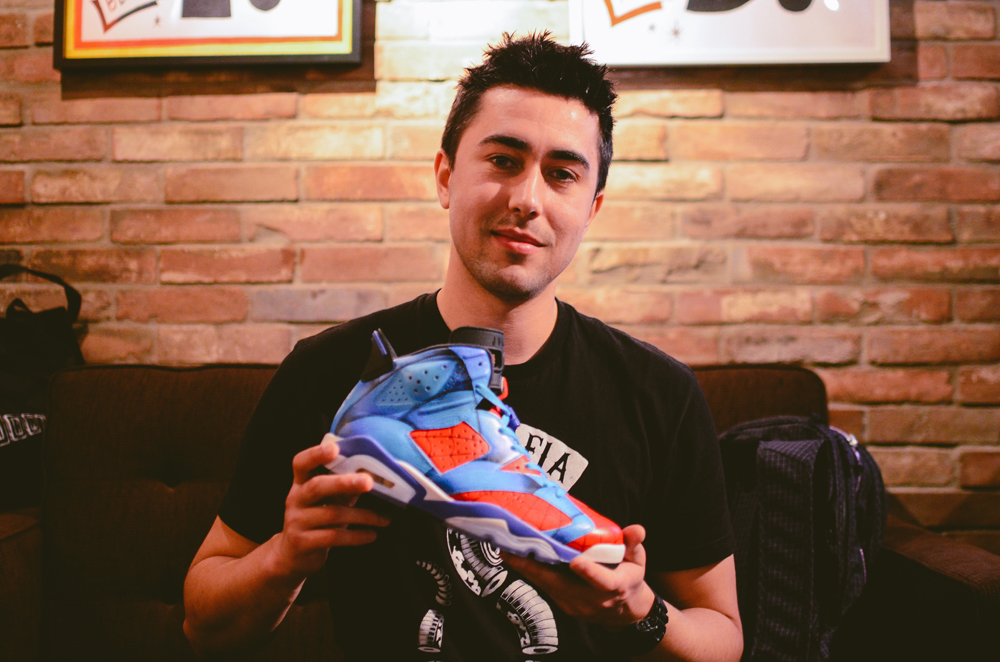 Sneaker customizer Matt “Sekure D” Fabris certainly loves his sneakers (around 450 pairs at last count), but the 28-year-old Australian never expected that his career would one day revolve around them. What started off as a hobby to personalize kicks and get away from the rigors of university soon garnered the attention of friends and even strangers, eventually paving the way for Matt to set up his own business selling customized sneakers and toys.

Making his way here for the Singapore Toy, Games & Comic Convention 2014, Matt took some time off his busy schedule to speak to us about his journey, his favorite comics and an upcoming sneaker collaboration with one of the industry’s finest, that’s sure to set hearts beating fast. Matt demonstrating his techniques on a pair of Jordan VIs.

Nice to meet you, Matt. We’re pretty curious about your nickname, Sekure D.
I was at a cinema complex one day with a group of friends. We were on the second storey, like a balcony level, and below us was a record store. Hip hop trio Naughty by Nature happened to be there doing a record signing and when one of my friends passed a glass bottle of Coca Cola to one of the other boys, it accidentally dropped and shattered near Naughty by Nature. It looked like someone threw a bottle intentionally.

All this time I was watching trailers on the big screen and not paying attention, so I was still sitting there when my friends ran off. They were like “Matt, security, security” and I turned around to see these big security guards running at me. We got away eventually but for weeks after that, I’ll be at a party or walking down the streets and my friends would go “Matt, security, security” to take the piss out of me.

“Security” is too long a name for graffiti, so it became “Sekure”, but when it came to registering a business name, “Sekure” had already been taken so I took “Sekure D”, seeing as it sounds a lot like “security”. Plus, “Sekure D” sounds like good basketball defense and ties in to my love for basketball.

How did you first venture into the world of sneakers?
When I was a kid, I watched basketball religiously and it remains my favorite sport. I would always want Jordans but my parents never wanted to pay for them. So all my friends had cool shoes and I never did. At the age of 13, I got a job as a janitor in a bakery so I would save all my earnings and spend them on shoes. The very first pair of sneakers that I paid for were Jordan XIV. 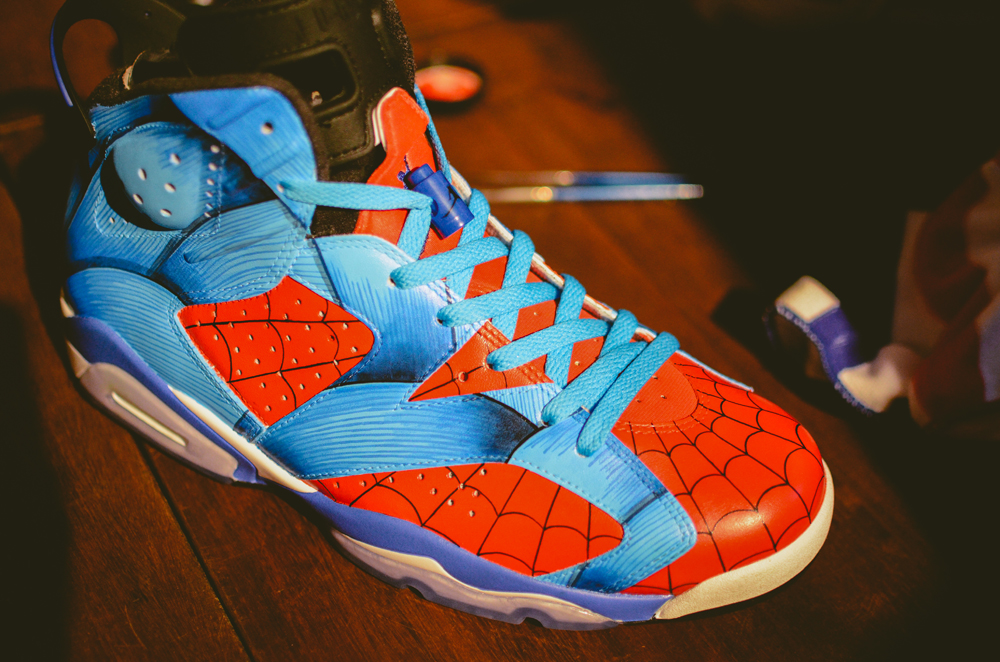 No prizes for guessing which comic book superhero this shoe is based on.

Which has been your favorite sneaker silhouette to work on?
It’s probably the Nike Air Force 1 or Nike Dunk, traditional favorites really. A lot of the design work is already done on these two shoes, so all you have to do is smartly apply artwork and the shoes will look perfect.

On average, how long does it take you to customize a pair of kicks?
Anywhere from 16 to 30 hours spread over one and a half to three days. I can do it quicker but that’s usually for simpler jobs. I get up at seven in the morning and work till eleven at night, almost everyday.

Being a sneaker customizer must come with its own set of challenges.
As an artist you have to be multi-talented. I’m a photographer, graphic designer, artist, public relations and media person all in one. I even do my own finances. Being versatile and creating consistent income streams is the hardest thing to do as a freelance artist. The online perception is that I’m doing amazing. Yeah, I’m doing great, but there are days when I actually don’t have anything to do due to a lack of projects and jobs. I can be making some money on Monday and not be getting a cent for the next three weeks. 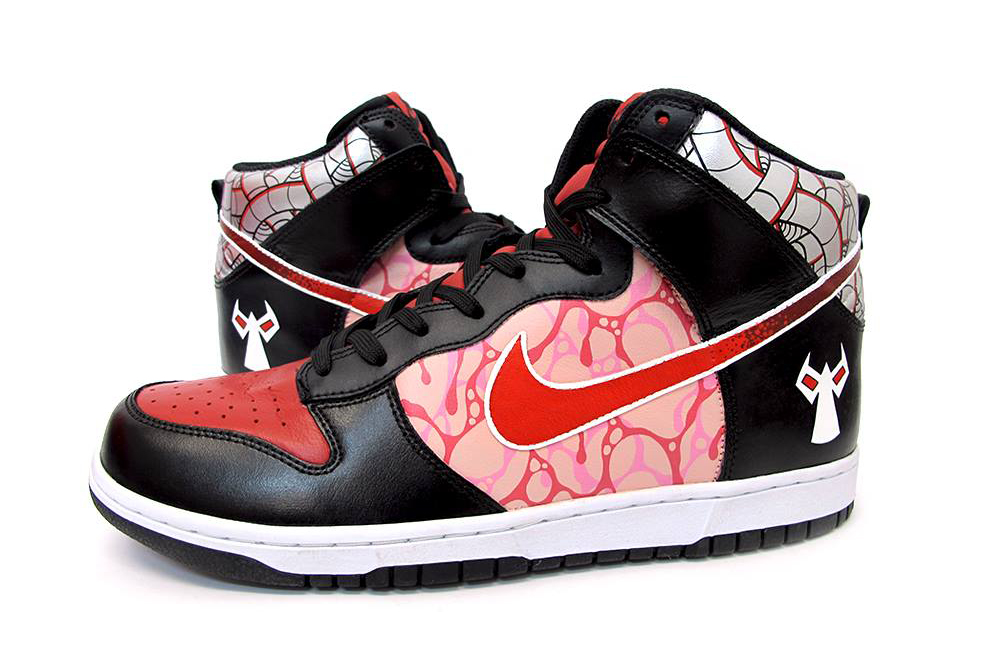 Like us, visitors to STGCC 2014 would have marveled at the work Matt did on these custom “Bane” Dunk Hi’s.

Has your family been supportive of your career?
My family’s great and they’ve been very supportive. I studied Finance and Information Technology so I’m sure my dad really wanted me to work in a bank. But when I got into this line and was able to go traveling and get into magazines, I think my parents recognized that it was something that had a future.

I’d be lying if I said that I never considered getting a proper job. But I’m all about pursuing what makes me happy. Wearing a suit and sitting in a cubicle with a spreadsheet doesn’t make me happy, so I do everything I can to make sure this is successful.

Seeing that you’re here for Singapore Toy, Games & Comics Convention 2014, tell us which is your favorite comic book.
I love Watchmen, Sin City and Spawn. I even met Dave Gibbons, the illustrator for Watchmen, twice and got an original drawing of Rorschach (the comic’s protagonist), which is my pride and joy. I also have two tattoos, one of which was inspired by Watchmen.

What do you enjoy seeing most at these conventions?
I just love seeing people getting the opportunity to express themselves at conventions. There’s people who cosplay and it gives them something cool to do and makes them feel like a character for a day. I love seeing kids being really happy buying toys and meeting their superheroes. Since I’m from Australia, I also get to meet people in the same field whom I don’t get to meet them very often because they stay far away. A collaboration in the making: Sekure D x SBTG.

Tell us a little about your upcoming collaboration with SBTG.
Mark and I have been friends for six or seven years. He’s always been like a big brother figure to me, given me great advice and really helped me out in my path to becoming a proper full-time artist. Since I was coming to Singapore, we decided to work on some shoes together. It’s our first collaboration and I’m really excited about it. The shoes are representative of both our styles and I think people are going to flip when they see it. All I can say at the moment is that it’s a Jordan III.

What else is in the pipeline once you head back to Australia?
I’m starting a YouTube sneaker show called “Lacing It Up”. We started filming the pilot last weekend so it’ll be up in a couple of weeks. It’ll be a fortnightly episodes with weekly content as well. It’s going to be really cool. In fact, I’m shooting stuff here in Singapore too as I walk around. Keep on look out for it on social media!

We’ll be showing you more of what Sekure D and SBTG got up to, so keep up with us on social media if you haven’t already!