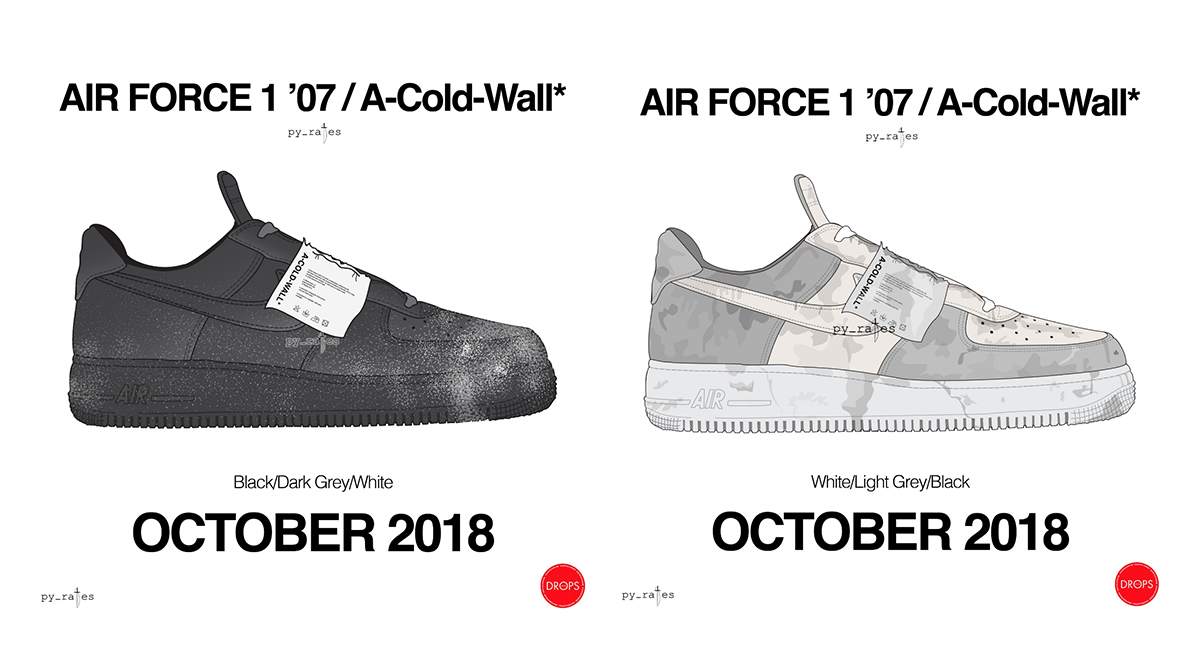 It appears that the A-COLD-WALL x Nike Air Force 1 leaks were true. The sneakers will arrive this Friday, December 21, in exactly the colorways that were posted by @hanzuying. The sneakers will be available at Dover Street Market Singapore in-store and online as well as END Launches via raffle.

Here’s a closer look at the A-COLD-WALL x Nike Air Force 1 sneakers, courtesy of Instagram user @hanzuying. It appears that the collaboration footwear is set to release sometime in December instead of October, as reported previously. In addition, the sneakers seem to differ from the mockup images released by @py_rates.

What do you think of these new images? Do you prefer the mockups instead? Let us know in the comments below.

Sticking true to A-COLD-WALL’s aesthetic, the shoes will feature a textured and distressed look.

Twitter user @py_rates claims that more information regarding the much-awaited A-COLD-WALL x Nike collab has been leaked. According to @py_rates, the sneaker collab will be released in October 2018.

Details regarding the collaboration are still hazy, however, it looks like the shoes will feature a distressed look. Other aesthetic features include light paint splatters, as well as a dual Nike and A-COLD-WALL branding on its side.

The mockups also show that the Air Force 1 Low silhouette has been amended into a laceless fit, coming in two monochromatic colors – black and white.

Pipt.com claims that news of the collaboration first came about from A-COLD-WALL’s founder Samuel Ross in June 2017. However, details regarding the exciting collaboration were only released by Twitter user @py_rates a year later on June 29, 2018.

Despite the exciting news, fans have taken to Twitter to express their thoughts on the upcoming release. Some claim that the upcoming collab looks “terrible”, while others state that the sneakers are “garbage” (see images below).

What are your thoughts on the upcoming A-COLD-WALL x Nike Air Force 1 Low collab? Let us know in the comments below!