Don’t Sleep: Adidas x Bape Dame 4 will be Released Over the CNY Holidays

Don’t Sleep: Adidas x Bape Dame 4 will be Released Over the CNY Holidays

The Adidas x Bape Dame 4 will be released on Saturday, February 17. 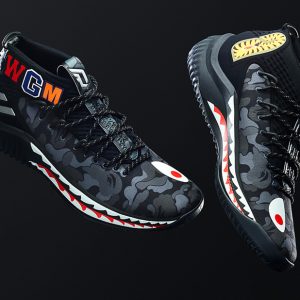 The Adidas x Bape Dame 4 will also be available at Bape Store Singapore. The news was announced on Instagram earlier on Tuesday, February 13 (post below).

Information is scarce but keep an eye out on Straatosphere for more updates to come!

The Adidas x Bape Dame 4 collaboration will be released in Singapore over the Lunar New Year period.

News of the exciting Adidas x Bape Dame 4 collaboration was first brought to light through rumors announced in November 2017. Now, it looks like the rumored collab has come to fruition.

The finalized sneakers will feature Bape’s iconic camouflage on its outer along with a shark face logo and shark teeth graphics outlining its midsole.

The Adidas x Bape Dame 4 will be available in three different colors: Green Camo, Red Camo, and Black Camo. However, Highsnobiety reports that the Red Camo colorway will be a Family and Friends exclusive.

The shoes are expected to cost US$150 (approx. S$198) – an affordable price for a pair of hyped sneakers.

According to Adidas, the collaborative sneakers will be released at 10am (GMT+8) on Saturday, February 17. Customers will have to log on to a special splash page to purchase the shoes.

To cop the shoes, customers will first enter a virtual “waiting” room before being randomly selected to purchase the shoes.

Click here for more information on the shoes. Alternatively, view the gallery above for more images of the Adidas x Bape Dame 4.

Did you manage to purchase the hyped Adidas x Bape Dame 4 sneakers? Hashtag your on-feet pictures #straatgram when you post them on Instagram!