Catchplay Launches in Singapore, Plans to be #1 Movie Streaming Service

Catchplay Launches in Singapore, Plans to be #1 Movie Streaming Service

The competition in the video streaming market heats up, as Catchplay becomes the latest to offer its movie-on-demand service to Singapore.

Much like Netflix, iTunes and Google Play, Taiwan’s Catchplay lets you watch your favorite movies anytime and anywhere.

Broadcasting in HD format, Catchplay supports playback on smartphones, tablets, computers and smart TVs. It’s also compatible with Google Chromecast and Apple TV, giving you the option of streaming on a larger screen.

What sets Catchplay apart from the rest is its emphasis on Hollywood and Asian movies. TV show buffs who are hoping for another platform to catch their dramas will have to look elsewhere.

Membership is fairly straightforward, as subscribers can choose between two membership tiers. The first is free-of-charge, with members getting one free movie a month from a curated selection. The second is a paid subscription of S$14.90 per month, which lets the subscriber view unlimited movies from Catchplay’s expanding library of titles.

A rep for Catchplay stated that it has over 500 titles at present, with about 100 titles added each month.

The only catch (no pun intended) comes from particular movies, such as Batman v Superman and 10 Cloverfield Lane, which fall under the “Single Rental” category. Non-paying subscribers will have to pay either S$3.50 or S$6 to watch these shows, depending on how new the release is.

Paid subscribers are entitled to one free movie from the “Single Rental” list every month, but will have to pay the same fee as the non-paying members should they wish to enjoy more movies from this category. 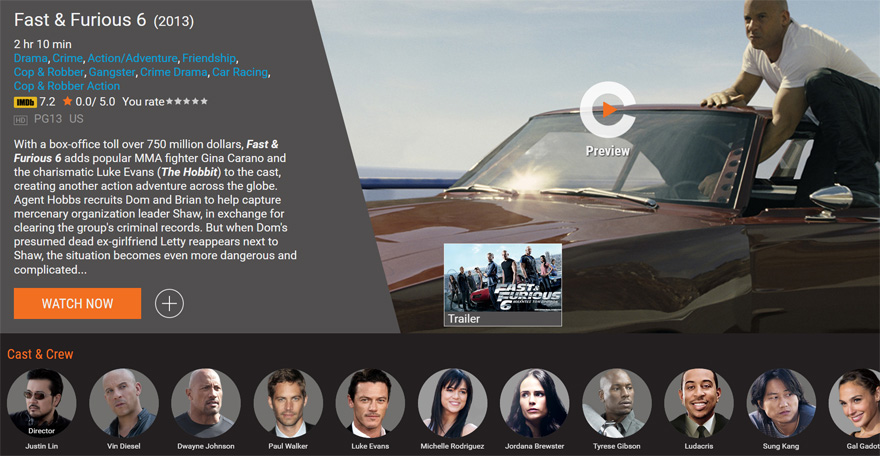 That said, Catchplay has done a pretty good job of sorting its movie library by genres and sub-genres. Each movie listed comes with an IMDB rating and a list of awards the movie has won, if any, helping viewers decide if the film is worth their time or not.

Users can also search for related movies under a particular cast or crew’s filmography, by clicking on their profile photos in each movie preview page.

There’s also seasonal curation and editor’s picks, an example being a category of racing movies like Fast and Furious 6 to tie in with the upcoming Formula 1 night race in Singapore.

For a limited time, Catchplay is offering its paid subscription plan for just S$12.90 a month. Those who like their Facebook page by the end of this week will also obtain a two-month subscription-free promotional code.

Read More: “The Get Down” is an Epic Tale of Hip-Hop’s Origins