We love a fashion designer or brand that is bold enough to stand out from the crowd. Here’s a roundup of fashion designers and brands that have gone against the grain this year. Raf Simons, who’s fresh at the helm as chief creative officer of Calvin Klein, is wasting no time in staging change. His very first move? A co-ed runway show presented at New York Fashion Week on February 10th, 2017, to mark his debut collection for the brand.

This is a bold decision that should come as no surprise to those who have kept in step with Raf Simons’ movements. The designer has always been vocal about wanting to spark change in the fashion industry. After all, this is the same man who once said, “I’ve come to really question the system. As much as I am part of it, I have to question it for the simple reason that I wonder how far it can go.”

But Calvin Klein isn’t alone in its decision to present both men’s and women’s collections in the same show. Brands such as DSquared, Paul Smith and Gucci will do the same for their Spring/Summer 2017 shows.

The co-ed movement isn’t just limited to high-fashion brands; streetwear labels such as Public School and Rihanna’s FENTY PUMA have also opted to showcase their collections in the same way.

If all this means more genderless clothing, the future of fashion is looking bright. The recently revealed Pirelli calendar marks its 44th edition since its debut in 1964 and it couldn’t have been executed in a more tasteful way.

In keeping with tradition, an acclaimed photographer was given the opportunity to shoot the calendar and only the world’s most beautiful women were featured. The difference this year? The women (think Nicole Kidman, Julianne Moore and Lupita Nyong’o) were made up and styled minimally, and supposedly no retouching was done to the photos.

Titled Emotional, the 2017 edition was shot by Peter Lindbergh, who previously shot the calendar in 1996 and 2002. On the latest edition, he said, “It’s another kind of naked, more important than body parts. What is more than being naked is to show yourself the way you are.”

As in past years, the Pirelli calendar comes in a limited print run of 2,000 copies, which are gifted to the tyre company’s key clients and VIPs. Black Friday, an annual sale affair that sees brands and retailers slashing prices down to a nub. With crowds growing crazy on the bargains and lines extending around the block, Black Friday is the very picture of mass consumerism. This year, the total spend in the States on Black Friday online was more than 3 billion dollars.

While some brands were happy to extend discounts and operating hours, New York label NOAH chose to close its doors and its website, with text that read: “Thank you for not shopping.”

Known to be a supporter of ethical manufacturing and an advocate of environmentalism, the brand took to Instagram to encourage shoppers to shop with outdoor brand Patagonia instead, as it was donating all profits from Black Friday sales to grassroots environmental groups. 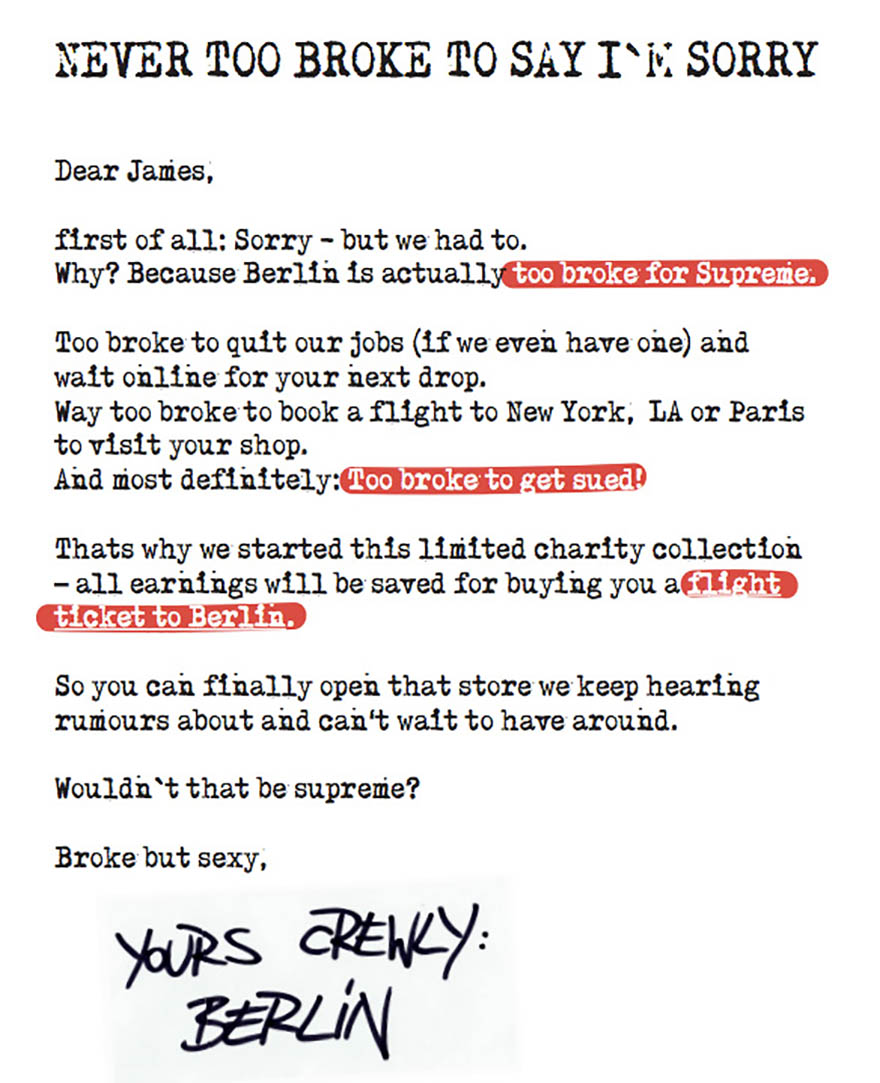 In June this year, Berlin-based label Muschi Kreuzberg made a pretty ballsy move and sent a letter to  Supreme’s James Jebba, titled “Too Broke for Supreme,” and it went like this:

first of all: Sorry – but we had to.
Why? Because Berlin is actually too broke for Supreme.

Too broke to quit our jobs (if we even have one) and
wait online for your next drop.
Way too broke to book a flight to New York, LA or Paris
to visit your shop.
And most definitely: Too broke to get sued!

Thats [sic] why we started this limited charity collection
– all earnings will be saved for buying a flight
ticket to Berlin.

So you can finally open that store we keep hearing
rumours about and can’t wait to have around.

Wouldn’t that be supreme?

Broke but sexy,
Yours crewly:
Berlin”

Later that month, Muschi Kreuzberg went on to release a collection featuring Supreme’s much-coveted box logo t-shirts and hoodies, which have been scribbled with the words “Too Broke For” over the famed logos.

Fun fact: two days ago, the label spotted a resale piece from the capsule collection going for US$277.99. Plus, to our knowledge, Berlin still doesn’t have a Supreme store, but that’s some way to draw attention to your brand. 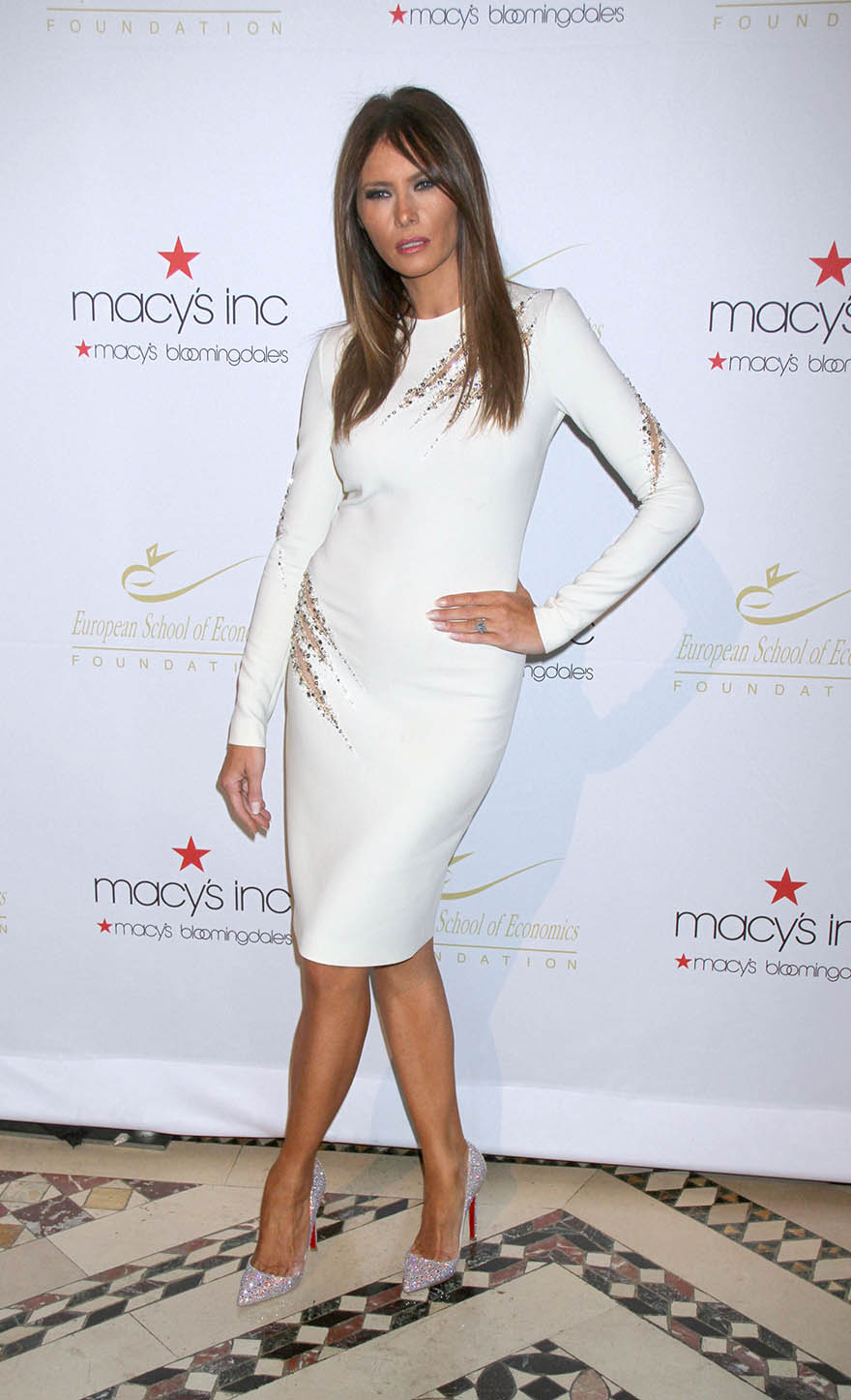 Ever since the PEOTUS was crowned, many fashion designers have been asked the same question: will you dress the new First Lady?

While some designers like Diane von Furstenberg and Thom Browne have said yes, Marc Jacobs has come forward with a vehement no. “I have no interest whatsoever in dressing Melania Trump,” he said. “Personally, I’d rather put my energy into helping out those who will be hurt by Donald Trump and his supporters.”