Streetwear takeover: Dior could be linking up with Jordan Brand for a $2,000 sneaker

Streetwear takeover: Dior could be linking up with Jordan Brand for a $2,000 sneaker

Social media is rife with rumors of a possible Dior x Air Jordan 1 collaboration in 2020.

Speculation began circulating as soon as Italian fashion house Prada confirmed its own collaboration with Adidas.

Streetwear is already exploding at the moment with highly anticipated collaborations coming through week in week out. And it’s about to hit yet another high point with talk of a possible Dior x Air Jordan 1 collaboration intensifying on social media. This comes just days after Prada officially announced an upcoming partnership with sportswear giants Adidas. 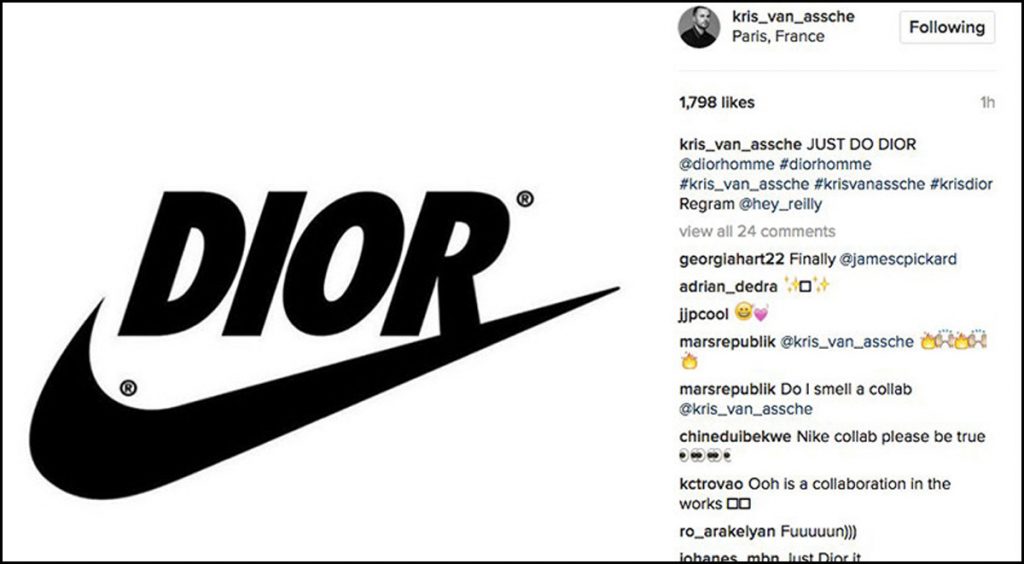 Initial rumors only pointed to former Dior creative director Kris Van Assche’s now-deleted Instagram post back in 2017 – possibly an attempt to flame the rumors after the Prada x Adidas collaboration news broke. But it seems there could be some truth behind the rumors after all. Further developments suggest that the collaboration will entail a limited run of 1,000 sneakers retailing at $2,000 (approx. S$2,723) each.

The fact that Kim Jones, the man behind Louis Vuitton’s monumental collaboration with Supreme, is at the helm of Dior now is good reason to believe in the plausibility of these rumors as well. Plus, it’s no secret that luxury fashion houses have been showing a keen interest in streetwear these days. A quick look at recent Gucci, Balenciaga and Vetements  collections, and even Louis Vuitton’s appointment of Virgil Abloh as menswear creative director, are clear indications of streetwear’s influential takeover.

While Prada x Adidas is confirmed, whether the Dior x Air Jordan 1 collaboration will actually happen remains a mystery. But if done right, these luxury streetwear partnerships might just herald another landslide moment of the sort that made Louis Vuitton and Supreme’s collaboration a worldwide spectacle.

If the rumors are true, what would you expect from a Dior x Air Jordan 1 collaboration? Fire away in the comments below.

The rumors are true: Prada for Adidas is happening