Mr. Kikuo Ibe, Inventor of the G-SHOCK, Hopes to Create a Watch for Space Travel

Mr. Kikuo Ibe, Inventor of the G-SHOCK, Hopes to Create a Watch for Space Travel

Mr. Kikuo Ibe, creator of the G-SHOCK, spent time telling us all about his past and discussing what the future holds. Mr. Kikuo Ibe, inventor of the G-SHOCK, in Singapore

In a candid interview, Mr. Kikuo Ibe, founding father of the G-SHOCK reveals his alternative career choice (had the G-SHOCK not worked out) and his hopes for the future of the indestructible watch.

As we made our way to Supplies & Co., where the interview was to be held, we caught a glimpse of Mr. Kikuo Ibe, who was putting the finishing touches on a presentation he would later give at the launch event of the G-SHOCK Full Metal 5000 series, also held in the store.

Small in stature though he may be, Mr. Ibe’s infectious energy is one that can only be attributed to legends. If you’re not familiar with what makes Mr. Ibe a legend, here’s a quick recap: in 1983, he created the G-SHOCK watch, which is widely recognized as the most indestructible watch in the world.

First of all, given that we are here to celebrate the launch of the Full Metal 5000 series, could you let us in on your thoughts on the collection?
This GMW-B5000 is a based on the DW-5600 which is the original style of the G-SHOCK and we decided to develop the watch in full-metal construction to celebrate the brand’s 35th year anniversary. I’m very happy to be here and announce the launch of the Full Metal 5000 series.

This appears to be the first time that the iconic square-faced design receives a full-metal construction. Could you walk us through the challenges that come with creating a tough watch using metal as opposed to rubber?
To develop the full-metal GMW-B5000, we didn’t want to give up the style, size, as well as the functionality and “Absolute Toughness”. In the end, we are very happy to have come up with new structures (new case fabrication employing a highly durable fine resin insert between the stainless steel case and bezel to absorb shock) to make this happen.

After 35 years at the helm, has it ever come to mind that someday you’d have to hand over the responsibility? How prepared are you for that day to come?
Currently, we already have a lot of developers working at G-SHOCK. They are coming up with a lot of ideas and I feel that we are prepared to pass on the mantle to the next generation. So you can expect new innovations for G-SHOCK coming out soon. 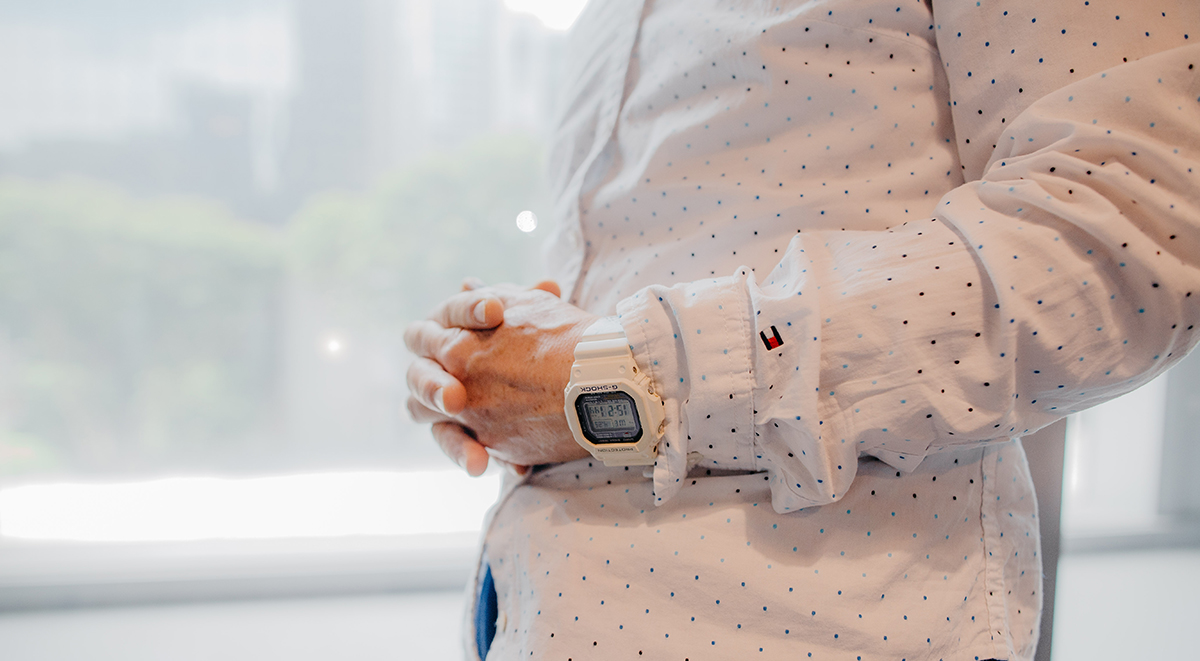 Interesting fact: Mr. Ibe wears his G-SHOCK DW-5600 in white only in the summer

Personally, how many G-SHOCK watches do you own?
I own only three G-SHOCK watches of the DW-5600 model in red, black, and white. I rotate between the watch colors according to the season. I wear the red one during winter, white in summer and the black in spring.

Can you share with us your hopes for the future of G-SHOCK?
G-SHOCK has already been crafted and engineered to withstand possibly any harsh conditions on earth. In the future, I think there will be a time where everyone can travel to outer space. However, the outer space is a much tougher environment as compared to earth. There are so many issues to consider to the point that I could not start the development of these watches. But I hope that one day, we can develop a G-SHOCK watch with the capability to withstand the tough conditions in outer space.

Had the G-SHOCK not been successfully created, what’s another career path you would have chosen?
I can say now that my hobbies include gardening and planting vegetables. So perhaps I would have ended up being a farmer.

To find out more about the DW-5600 watch, visit the G-SHOCK ORIGINS website.