Battle of the Masters: Why We Love Masters Football

Battle of the Masters: Why We Love Masters Football 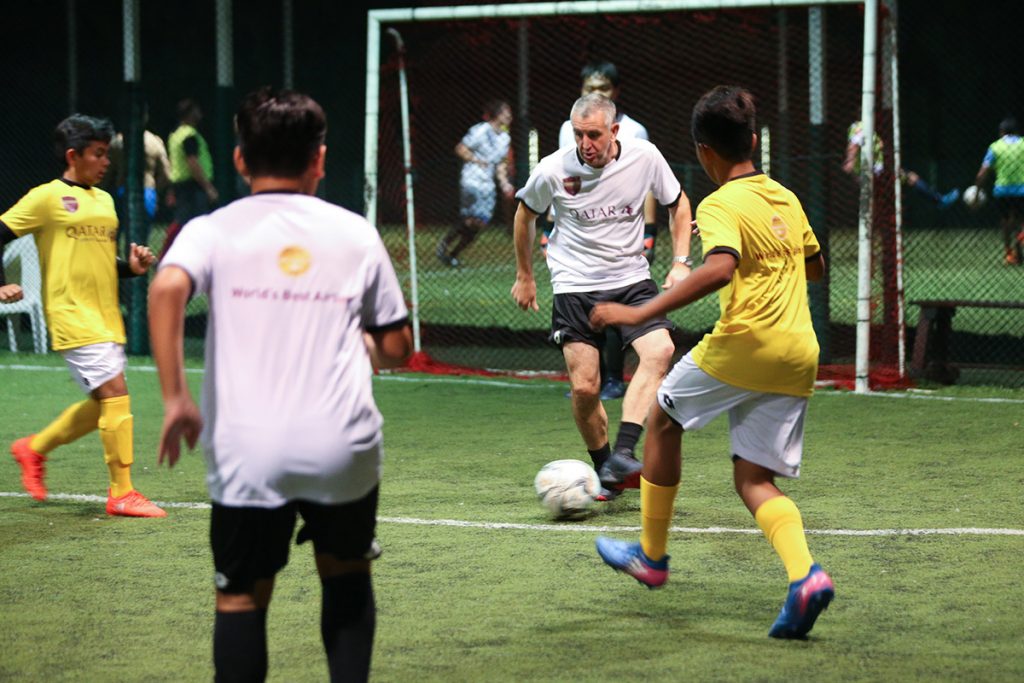 Nigel Winterburn and Aleksandar Duric (not pictured) led children in a football clinic in Singapore, specially organized by Qatar Airways

Legends of Arsenal, Liverpool and the Singapore national team will take the field at the National Stadium on November 11 as the Battle of the Masters comes to town.

It’s Arsenal versus Liverpool, and we’re deep in injury time with the scores level in a classic encounter. David James plays a long ball out to Steve McManaman who spots Robbie Fowler’s run. With a deft touch, the Toxteth Terror collects Macca’s pass and skips past Nigel Winterburn to slot home. “You’ll Never Walk Alone” echoes through the stadium as the final whistle blows.

No, you haven’t stumbled upon a 90s football highlight reel, this could be what you see live at the National Stadium this weekend. The latest Masters Football tournament to arrive on our shores, the Battle of the Masters will pit the greats of Arsenal, Liverpool and Singapore against each other in a series of three 40-minute matches. For long-time football fans, this is almost as good as it gets. Here’s why.

World-class football teams might visit Singapore every summer, but entire generations of players pass through the ranks of our favorite clubs between their treks out here.

For many fans, a Masters Football tournament is their first opportunity to see their heroes up close. It’s a bit like watching a band you grew up listening to – they’re not releasing any new chart-toppers, but they’re still the people who shaped part of your youth.

It keeps legends connected to the game they love

Retirement from any career requires a bit of adjustment, but leaving football has its unique difficulties. Imagine stepping away from the only life you’ve known since you were a kid; from the adulation of massive crowds; from the never-ending pursuit of glory. Now imagine doing all that when you’ve just hit your mid-30s. It’s a challenge – physically, mentally and financially. With Masters Football the love of the game goes on.

It’s a stage for rivalries old and new

Rivalries – both between the clubs as a whole and individual players – mean that Masters Football tournaments carry a derby feel to them. But it isn’t just duels from back in the day that take center stage – there’ll be some new ones too. Take Singapore’s Aleksandar Duric. He’s set to go toe to toe with Arsenal, the club he supports, and players that even the man himself had only seen on TV before.

It makes us feel young again

If you grew up in the 80s and 90s, now would be an unusual time for you as a football fan. It wasn’t long ago that the footballers you watched were older role models – athletes you dreamt about emulating one day.

Suddenly the ages of players caught up with your own, and before you knew it, most of the stars were younger than you. Now you’re too old to idolize them, and not old enough to look at them with parental pride.

As a remedy for that feeling of time marching on, wouldn’t it be great to see Fandi Ahmad giving defenders nightmares again? To watch Robert Pires work his magic on the wing once more. To witness Emile Heskey, well, being Emile Heskey.

Just run through the squad lists and feel the clock turning back. As of November 7, the squads are as follows:

Tickets to the Battle of the Masters are available from $32 via Sports Hub Tix.