Muhamad Ridhwan captured the hearts of Singaporean sports fans when he claimed the UBO World Championship belt as his own on May 27. He instantly became a beacon for Singapore’s boxing scene and a part of the country’s sporting history. With scarcely a moment’s rest in between, “The Chosen Wan” bounced right back into training, throwing leather with champions at the Mayweather Boxing Club in Las Vegas. Now, with his sights set on a new horizon, he will be facing Namibia’s Nathaneal “Iron Fists” Sebastian for the IBO Intercontinental strap on October 20. It will be a meeting between two undefeated fighters and has all the makings of an incredible bout. We caught up with the man himself to hear about his preparation and outlook for the future.

You will soon be fighting in the much anticipated IBO Intercontinental title bout. How are you feeling ahead of Roar of Singapore III?
I’m feeling strong and am very motivated to put on an amazing fight. I’m looking forward to showcasing my boxing skills and how much stronger my punches are now. If there is an opportunity for a knockout, I’m going for it.

You had the opportunity to visit Las Vegas and train with one of boxing’s royal families. What was it like training at the Mayweather Boxing Club?
Being at the Mayweather Boxing Club was a huge boost to my confidence. I got to train around former and current world champions. There are plenty of great prospects training there and everyone is hungry to show what they are capable of doing. I would say that the biggest lesson I learnt there is to have self-belief.

One of the more interesting things that happened there was when I was sparring one of Mayweather’s boxers. Halfway through the round, I heard a familiar voice coming from my sparring partner’s corner. Then I realized it was Floyd! So it was pretty cool to have him there studying me and then telling my sparring partner what to do. At the end of the session, I shook hands with him.

You have captured the UBO World Championship and are en-route to another title fight. Has your title win changed your outlook and attitude in training?
The title win is only a reminder to me that every fight is going to get tougher from now on. My opponents are going to be on another level and they to want to win as much as I do. Knowing this, I tell myself to make the necessary sacrifices and continue to take training very seriously because in boxing, one day you can have your hands raised but when one becomes lazy, one can find himself kissing the canvas.

The IBO has had many legendary champions. Manny Pacquiao, Floyd Mayweather Jr., Lennox Lewis, and Naseem Hamed to name a few.
With so many big names attached to the organization, do you get the sense that you are now fighting in the big leagues?
It is definitely an honor to be fighting for the IBO belt and I know that the IBO is a respected sanctioning body and has many great champions. I get the sense that things are just going to get bigger from now on and I am a step closer to the world stage. 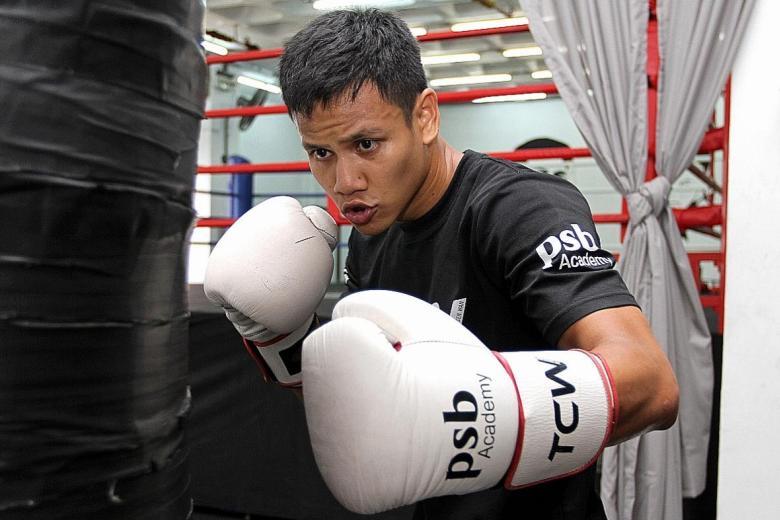 Your replacement opponent Nathanael “Iron Fists” Sebastian is undefeated and, like you, has won most of his fights via knockout. It’s always exciting when two undefeated fighters meet in the ring! How do you see the fight playing out? Has the sudden change of opponent affected your training camp at all?
The change of opponent does not affect my training at all. In the gym, we prepare for anything. So whatever way the opponent wants to fight us, we will always be ready. From his record, he has a decent number of knockouts. I think he would want to come forward and intimidate me with his power. But I truly believe the power in my punches combined with the skills that I have can stop him in his tracks. If I continue to be accurate, I will put him down. Halfway through the fight, I will be the hunter and he will be the hunted.

Let’s hear you address your fans! When you step between the ropes, what can we expect from “The Chosen Wan”?
Hey Singapore and all boxing fans! On 20th October, you will be entertained with a great fight. You can expect me to bring the fight to my opponent, taking his best shots and delivering some of my own. There will be a lot of heart, skill and power. Something you’ve never seen in the local professional boxing scene. I am training extremely hard so I can put up an entertaining fight, get the win and make all of you proud. Be there, and don’t blink! In the meantime, also follow me on FB and Instagram at @tcw.legends.

Catch Muhamad Ridhwan at the Roar of Singapore III, happening at the Suntec Singapore Convention and Exhibition Centre today, October 20. For more information, and to reserve your tickets, visit Sistic.