Besides the slight similarity in brand name, New Era and New Balance share American origins, sports heritage and a strong presence in street culture. It’s rather apt then, that both entities have come together to produce a murdered-out collection, in celebration of the 20th anniversary of the 580 sneaker.

Inspired by the solarization effect found in photography, the New Balance MRT580NE runner from the collection comes in a stealth black and neon colorway, made possible with the pairing of an all-black nubuck upper and a glow-in-the-dark-outsole. The reflective heel counter comes with a contour line-inspired pattern, and the glow-in-the-dark original tongue tab and New Era lace keeper re-affirms that this isn’t any other general release. Stabilization and cushioning duties are also well taken care of, with New Balance’s ROLLBAR, ENCAP and C-CAP technologies put in place for a comfortable stride.

Also part of the collection is the New Era 9FIFTY cap in black wool, which features a black leather rear strap and a matte black “NB” logo clip. Glow-in-the-dark embroidery and reflective black contour lines on the visor make this accessory a stand-out when the sun goes down. 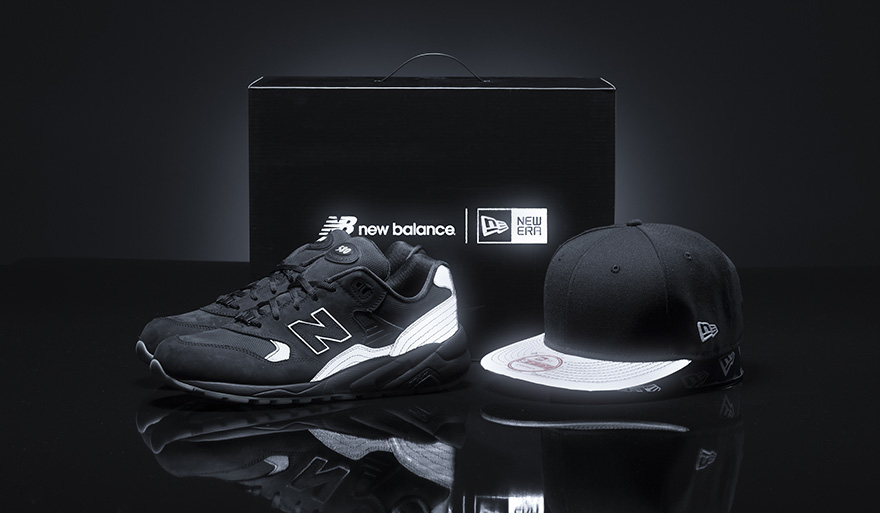 The New Balance MRT580NE and New Era 9FIFTY cap are sold as a set, in a premium case that resembles a cabinet with thematic reflective brand logos. Priced at S$289, the New Era x New Balance MRT580 collection will be available on January 8th exclusively at Limited Edt Vault (313@Somerset).