We attended the OITNB season 4 premiere in Singapore, where we did time, ate slop and hung out with inmates at the “Litchfield Penitentiary Cafeteria”. Plus, a rundown of season 4 episode 1, so expect spoilers. “And what are you here for?”

“The Orange Is The New Black party?”

“Party, huh? You think this is a party?”

That’s how we were greeted at the entrance to the OITNB season 4 premiere held in Singapore on June 15th. Not quite the over-enthusiastic media event welcome you tend to get so accustomed to.

We weren’t briefed beforehand that we’d be treated like inmates either, so this was a real surprise.

After a for-show bag check, each guest was made to register (sign off on an NDA), collect commissary (goodie bags) and wait to have our mugshot taken (photo wall).

Once all that was done, we entered the salon area, where we were given the option of getting our hair done or get inked with airbrush tattoos (we opted for the safe, “∞” on wrist that we hoped would wash off with warm water and a loofah). 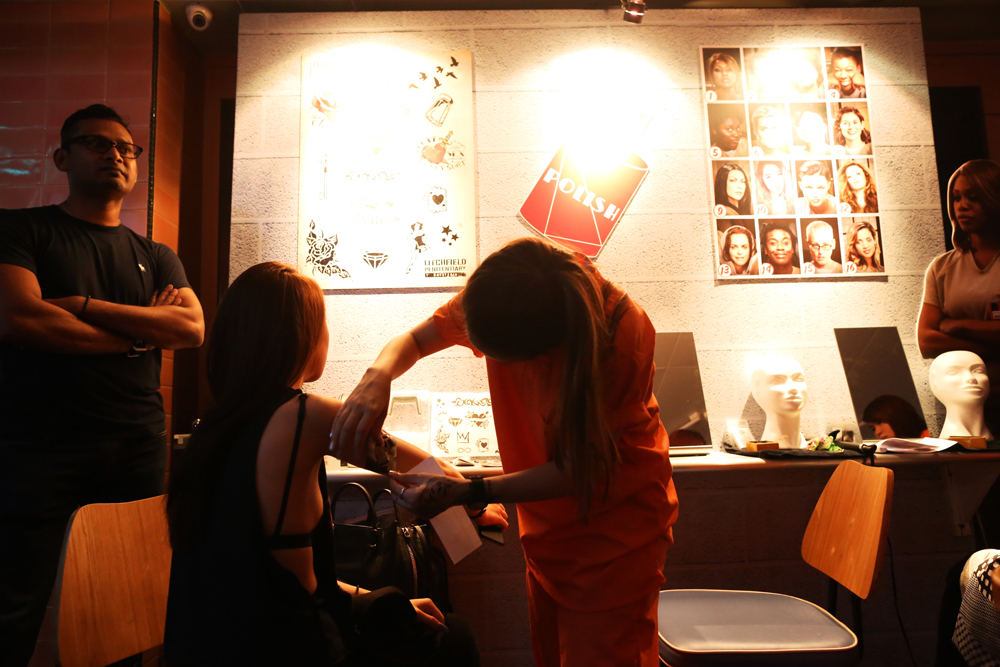 Get your hair did and airbrush tattoos done at “Litchfield”

Then, we were ushered into the yard, where we could grab a drink from the bar and spazz out with industry people over how intense the entire experience had been since we entered prison.

After drinks, a pornstached guard yelled at us to move along into the Litchfield Penitentiary Cafeteria, where we had to line up for our share of slop – a serving of modified Nutraloaf, conceptualized and created by Chef Bjorn Shen of Artichoke and Bird Bird fame.

Made with quinoa, nori, mushrooms, cheddar and pumpkin, Shen’s take on Nutraloaf tastes better than it looks. Despite that, we couldn’t get past the way it looked and so, sadly, left most of it untouched. 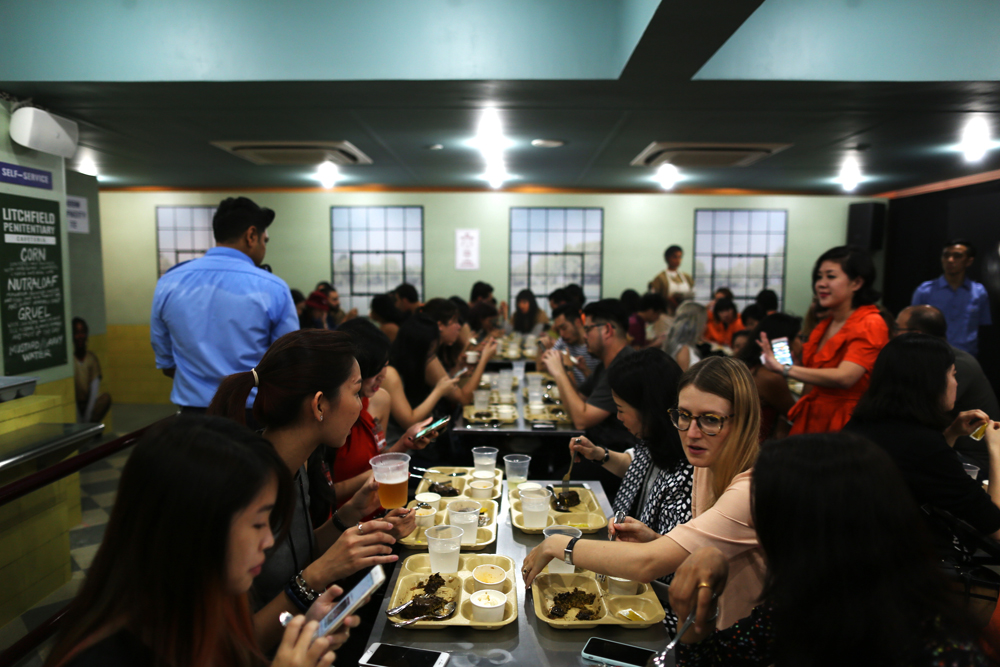 But this entire exercise was not about the food, or the cafeteria, or the actors; it was about the much anticipated return of OITNB, which will be discussed in the forthcoming paragraphs so spoiler alert.

At the end of season 3, Litchfield’s fences are being replaced, but not quickly enough, so the inmates escape through a hole in the fence and make a beeline for a lake that lies just behind the facility.

In keeping with the themes of God and religion that has been a common thread that runs through season 3 (Norma as “God”, kosher meals, Sophia turning to Sister Ingalls), the final episode explores the restorative power of water. Black Cindy, now known as Cindy Tova, immerses herself in water to complete her conversion to Judaism, Big Boo and Pensatucky form an unlikely bond while splashing about, and Daya goes so far as to thank her mother for helping her keep her baby.

But in true OITNB style, nothing stays happy-clappy forever. 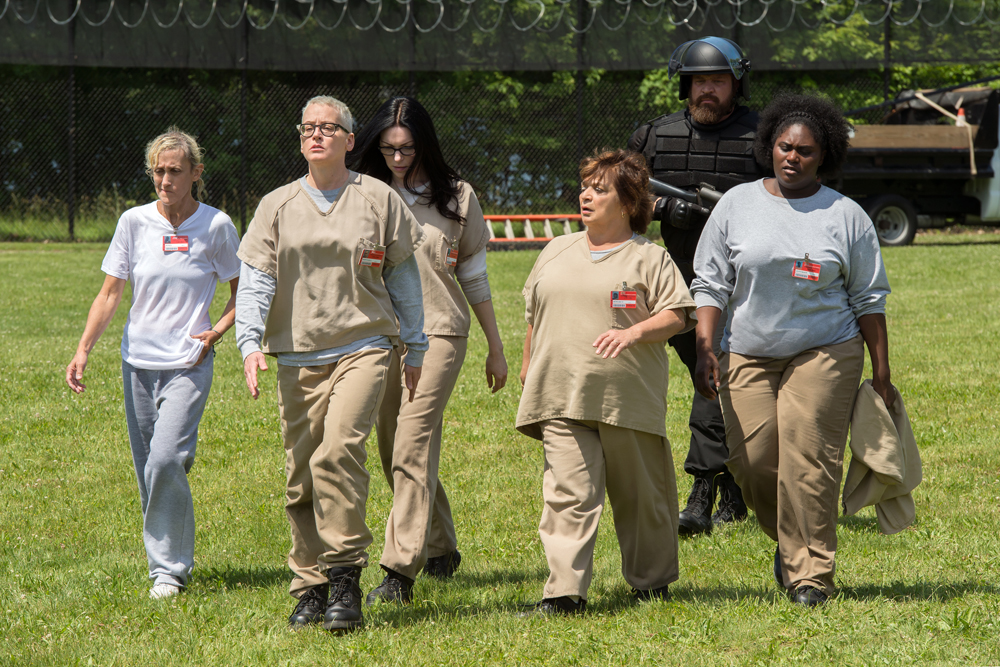 In the opening of season 4 episode 1, we see Alex being strangled by Kubra’s assassin who has been masquerading as a prison guard. Thankfully, Lolly steps in to save Alex (prediction win!).

Meanwhile, prison guards from Maximum Security are ushered in to hold the fort, which they do successfully, and Caputo and his crew looks so feckless in comparison.

The ladies’ excursion to the lake is shut down immediately and all are herded into the cafeteria. There, they learn they will be joined by new inmates – two of whom want to know who the “Hefe” is and Flaca points to Piper (prediction win!). 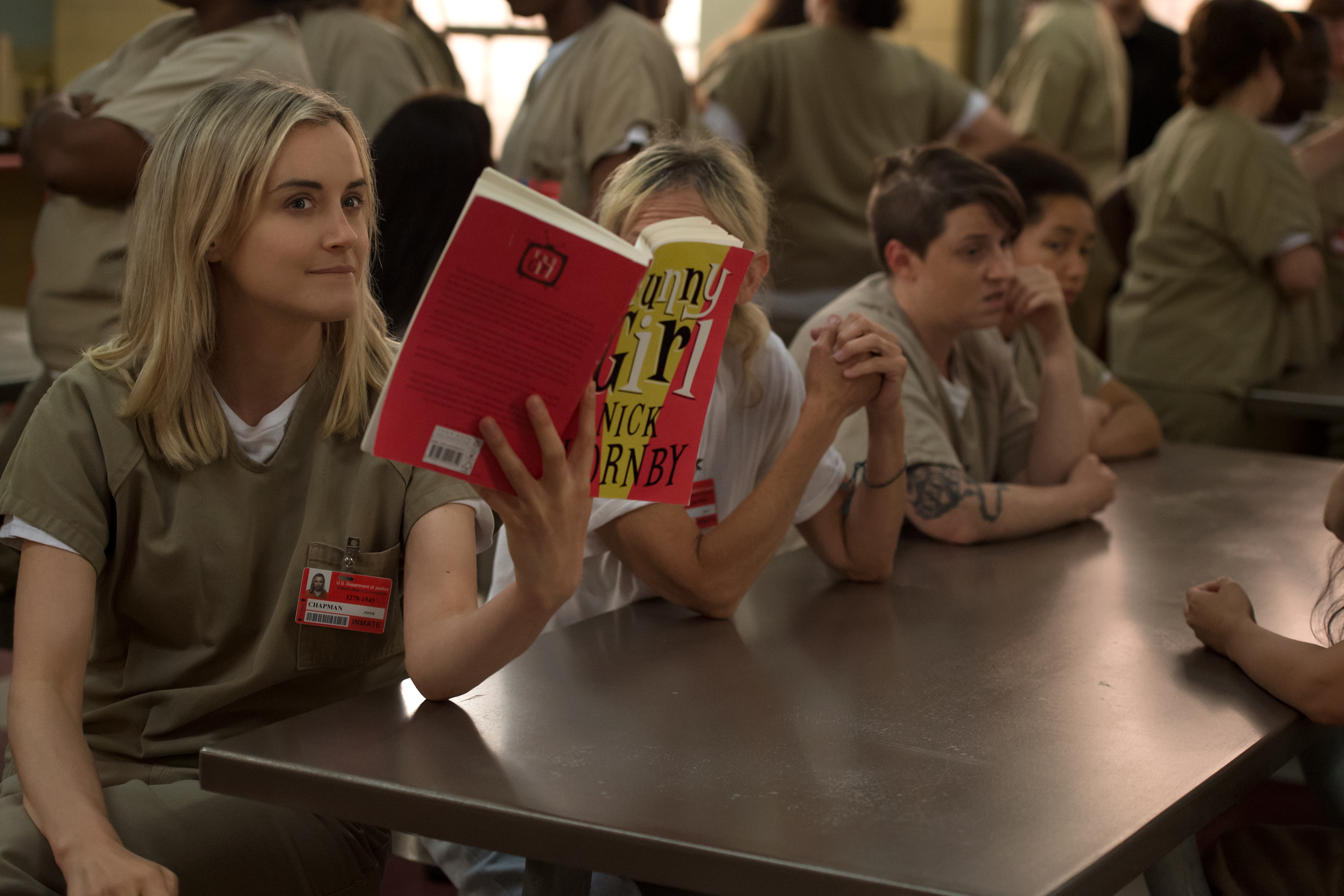 Soon, the newbies are assigned bunks. Piper shares a bed with a plump one; Poussey nearly becomes bunkmates with Judy King; and Cindy Tova gets testy when she’s assigned a hijabed bunkmate.

Meanwhile, Alex gets increasingly paranoid about the body of Kubra’s assassin that’s been left in the greenhouse. She creeps out of her bed in the dead of the night hoping to bury it. When she gets to the body, it is seen to be gasping for breath. She finishes him off silently.

The next day, Alex and Lolly attempt to bury the assassin’s body for good. This time, Frieda, one of Red’s Golden Girls, who happens to be in the greenhouse, offers to help, but not without first gaining leverage. Her strategy is practical but gruesome, and the entire scene plays out to the tune of “Cut My Life Into Pieces” by Papa Roach. The trio dispose of the body and the screen turns orange. Which, as any self-respecting OITNB fan would know, marks the end of an episode.

Snapping back to our current reality – Litchfield Pententiary Cafeteria at OverEasy, Orchard Road, Singapore – we were told that we had miraculously received parole. Apparently, “just for having watched the show,” announced the Pornstache of our prison sardonically.

That came as a relief. The experience had been fun and immersive, but stressful no doubt. This premiere took a media event and turned it on its head. No pandering welcomes at the door, everyone was rude and it was to be expected – it’s Litchfield and you’re an inmate. 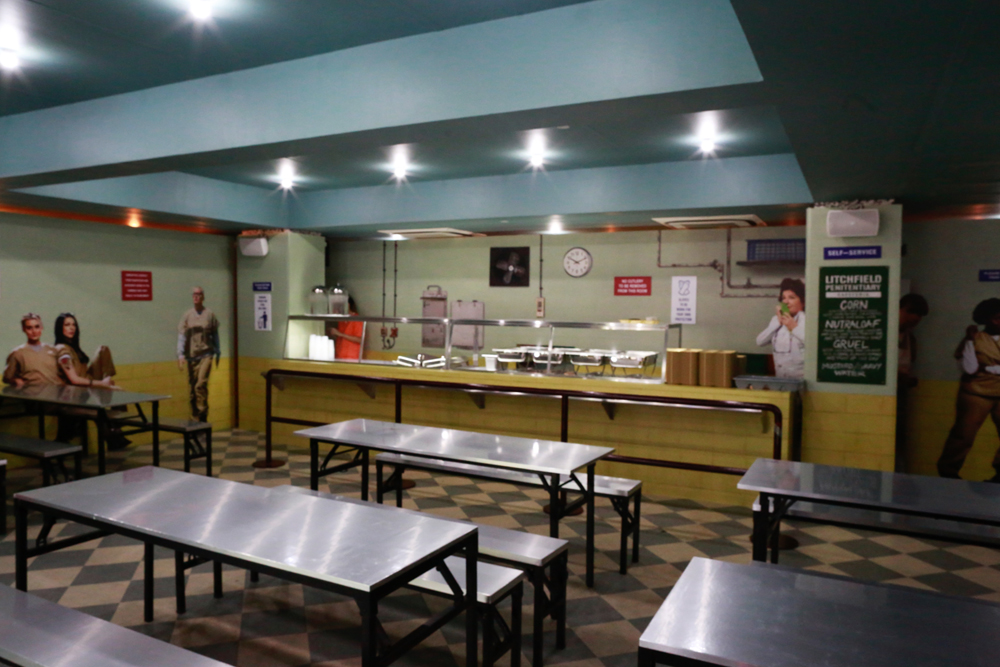 Red would be proud

Which made us think about that piece Jezebel ran about this pop-up Litchfield Cafeteria experience. The writer felt it glamorized prison life and Piper Kerman, who authored the book that OITNB is based on, deemed the entire exercise “repulsive”.

By contrast, we felt the event offered a glimpse into prison life as is shown in OITNB. So if this activation glamorizes prison life, it’s merely holding up a mirror to what the show is. And didn’t Kerman okay the OITNB TV adaptation of her book?