Straat Your Stuff: Tim Suen pulls out his grails, including those elusive Hello Kitty Air Presto

Straat Your Stuff: Tim Suen pulls out his grails, including those elusive Hello Kitty Air Presto Only one of four in the world: Paul Rodriguez’s signature sneaker made for Michael Jordan

You might have come across Tim Suen in his capacity as a street style photographer. This time, though, we’re flipping the script and zooming in on him and his sneaker collection that consists of shoes that are highly sought after all over the world.

How did you start getting into sneakers?
I started collecting sneakers when I was serving NS (National Service). I was finding my way around the sneaker culture back then and conveniently enough, it was also the first time I had money to play around with.

How many pairs of sneakers do you have?
I think I have about 50 pairs or so.

Your collection seems highly curated and not entirely driven by hype. What’s your approach to sneaker collecting?
History, quality, and design. My collection also contains shoes from different genres because of my appreciation for their design. For instance, I recently purchased the Yeezy Wave Runner. Name and hype aside, I feel that the Wave Runners are a beautifully designed sneaker. The colors used complement each other perfectly, not to mention the lime colored laces. Another favorite of mine this year is the Asics x Kiko Kostadinov Gel Burz 1. Kiko turned a rather chunky running shoe into something so sleek with its taping Tim recently started adding Nike SBs to his collection of shoes. One of which is the 1999 “Smurfs” seen above

You’ve got some extremely rare stuff. Could you tell us which these are?
I’ve got the 2002 Reese Forbes “Denim”, the 1999 Dunk Low Pro B “Smurfs”, the 2003 “Stash” Dunk Low and the Alphanumeric Dunks. Other than these SBs, I’ve also got the Nike Air Jordan 1 x Fragment and the Hello Kitty Nike Air Presto (only 12 in the world per colorway). But the rarest of all is the V-Rod Michael Jordan PE, created by skateboarder Paul Rodriguez for Michael Jordan – these are limited to four pairs worldwide.

Obviously, we need to know the story behind how you got your hands on those Nike SB V-Rod Michael Jordan PE.
Those were a pretty random find. I wasn’t even looking for them because I never thought there were more than two pairs in existence. I even messaged Paul Rodriguez asking what he knew, and even he thought that there were only two pairs, one with him and one with MJ. However, I actually found another pair, which makes it four in existence now. Back to how I found them, been following a sample collector in the states for some time and he posted them shortly after Paul Rodriguez’s latest collection video with Complex was posted.

What about those Hello Kitty Air Prestos?
I found them on IG as well, from a Singaporean seller. Basically, when I look for particular shoes I’ll search hashtags such as #hellokittyprestos and sometimes it works. He has the other white/pink pair as well which I’m hoping to cop one day. 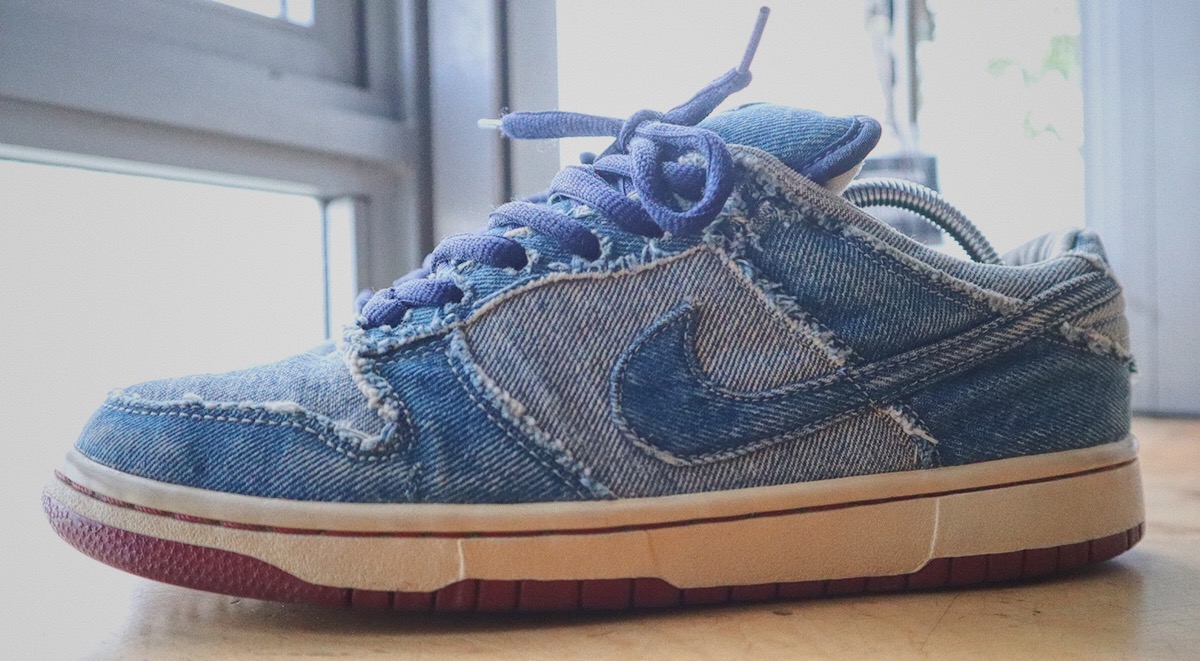 Reese Forbes “Denim” Dunk Low (2002): one of the best denim sneakers of all time

Why have you turned your attention to Dunks?
It’s about the longevity and quality. These two attributes are what got me into Dunks. If I am already going to spend so much on a pair, why not on a pair that’s going to last me for a lifetime. Dunks are just timeless in design and they last forever. I also love the story and inspiration behind each and every Dunk.

We’ll spare you the agony of picking a favorite pair, but which sneakers are among your top five?
The Air Jordan 1 x Fragment signed by Hiroshi Fujiwara has to be one of my favorites. While I’ve been actively collecting Dunks recently, this pair will always have a special place in my heart. I had them signed personally when Fujiwara visited Singapore during the LV x Fragment pop-up held at Surrender in April/May last year, truly an unforgettable experience. As for the remaining four, I’d have to say, the Hello Kitty Prestos, Denim Forbes (2002), Smurfs, and Stash Dunks. 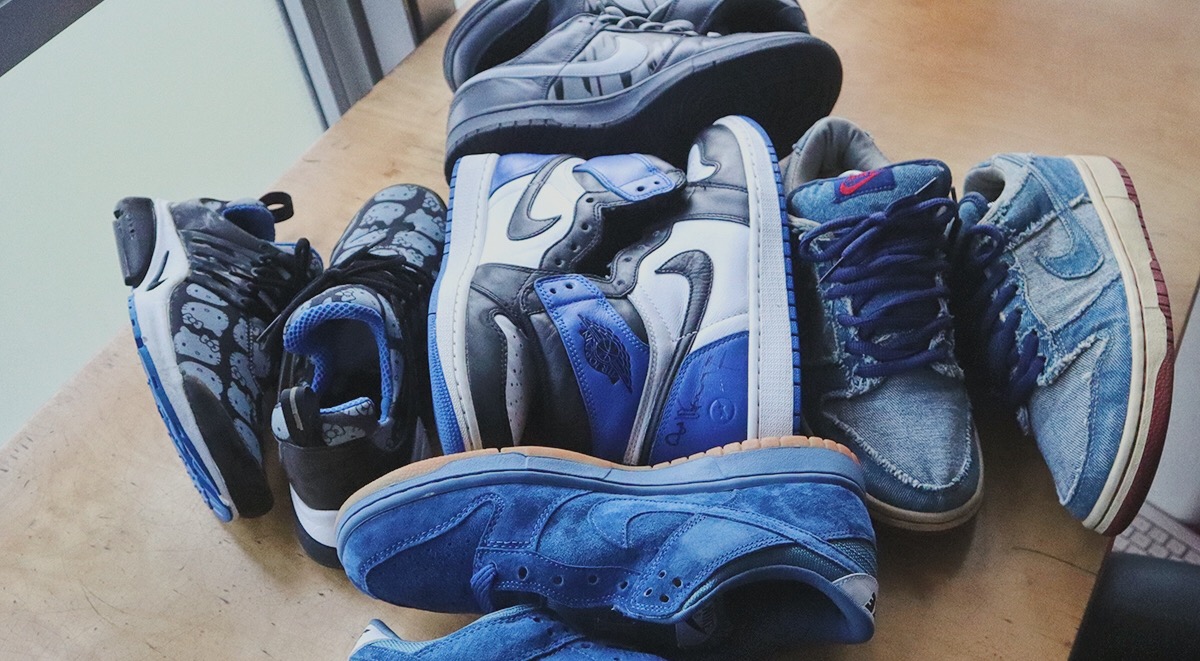 Do you wear any of your super rare sneakers out?
Of course. I buy a majority of my shoes worn because of my intent to wear them. The only pair that I have retired and cased up are my signed Air Jordan 1 Fragment by Hiroshi Fujiwara himself.

We can see you store your sneakers in clear acrylic boxes. Anything else you do to care for them?
I’ve tried various ways to protect my shoes and prevent any mold. I realized when I kept my suede sneakers in their original shoe boxes, mold would develop after a few weeks. This has changed since I put them in acrylic boxes under ambient light. I also include charcoal bags in each shoe box but I’m not quite sure if it makes any difference. Lastly, I put some in unzipped zip lock bags just to protect them from dust. Tim stays educated about sneaker culture through sneaker books, which also helped him discover the existence of the Hello Kitty Prestos

You’ve lived and worked in Germany for a period of time. What’s your experience with sneaker culture there?
Germans are more practical and timeless than Asians when it comes to fashion. There are a few serious collectors there, but generally, everyone’s really simple and don’t pay a lot of attention to sneakers over there. However, Berlin has one of the highest concentration of quality sneaker stores including Solebox, Sneakersnstuff, Overkill, Voo Store, The Store, Soto Store and many more all within a few kilometers.

What’s one thing that annoys you about the sneaker game now?
Too many collaborations. It feels like companies and stores are only collaborating to stay competitive. Majority of these collabs just don’t mean anything. What sneaker are you on the lookout for?
Quasimoto, Deftones Dunk, and the Asics x Kiko Kostadinov Gel Burz 1 in Black. Nothing else.

Will you ever stop buying sneakers?
Never. Always gonna be a nerd like that.